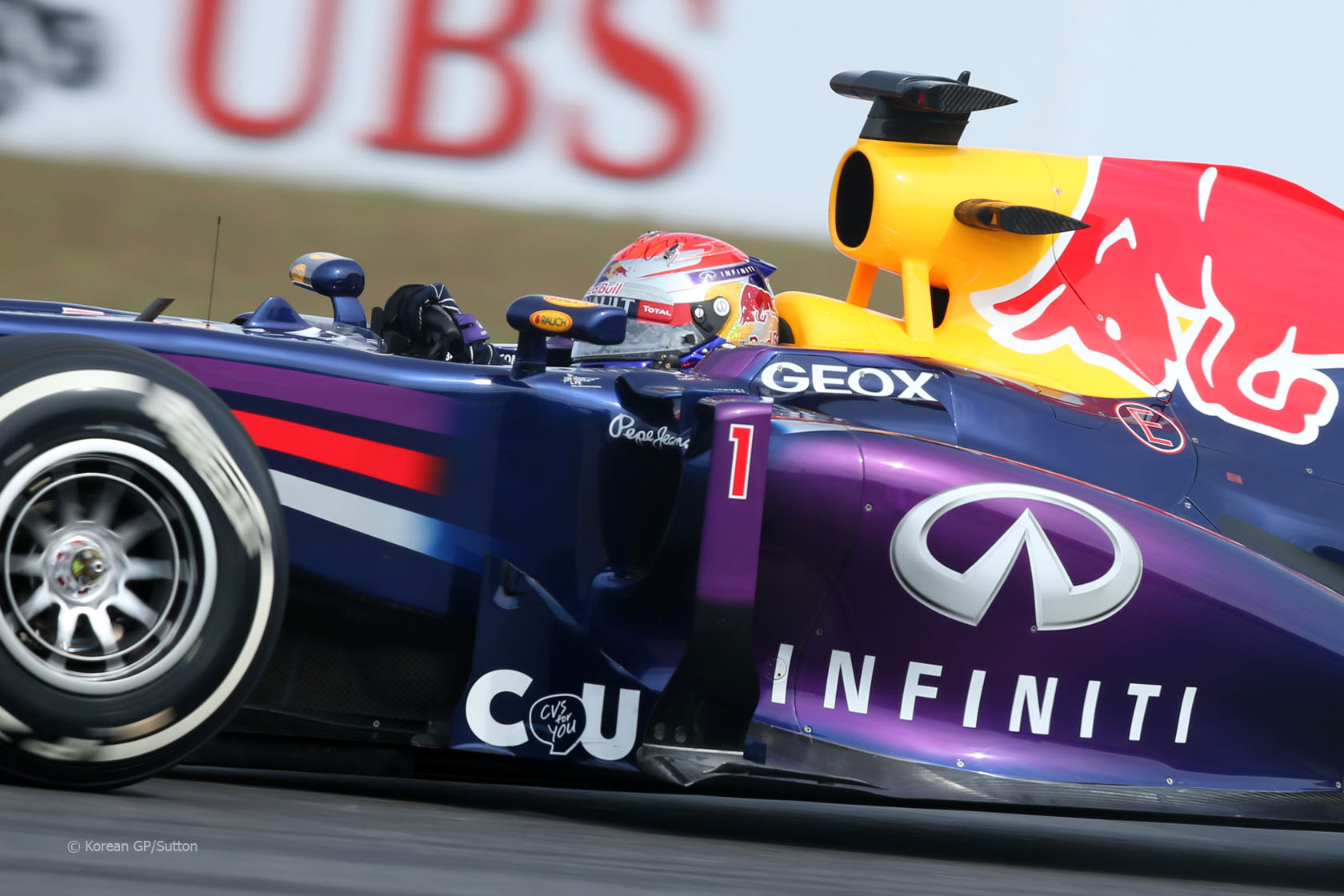 With the prospect of rain during the Korean Grand Prix looking increasingly unlikely, Sebastian Vettel’s rivals must capitalise on the start as their last, best chance of keeping him from victory.

As early as Wednesday the consensus among weather forecasts was that Tropical Storm Fitow would head away from South Korea and towards China. Nonetheless many headlines appeared claiming a typhoon was going to hit the track on Sunday.

Confidence in the predictions that the storm will stay away has continued to grow since then. At most F1 may see some rain during the build-up to the race, and there is a decent chance Sunday will remain dry until the chequered flag.

“The threat of storms has certainly abated somewhat since the beginning of the week,” said Lotus trackside operations director Alan Permane. “However I think we can still expect to catch the outskirts of the bad weather meaning we could see some rain overnight and early tomorrow morning if not for the race itself.”

Overnight rain may reduce what little rubber build-up there has already been at the track, giving teams that were already having problems with graining even more of a headache. With two long straights immediately following the first corner there is plenty of potential for position-swapping at the start of the race.

From second on the grid, Lewis Hamilton has a vital chance to launch an attack on Sebastian Vettel. Last year Vettel started from second place and got down the inside of pole sitter Mark Webber, taking the lead of the race which he went on to win.

But there are plenty of drivers pinning their hopes on getting away well at the start, including Fernando Alonso, who made an excellent getaway in Singapore two weeks ago.

McLaren have opted for a longer seventh gear ratio which they expect will help them on the straights. “The first couple of laps should be really interesting for us,” said Button. A two-stop strategy was the preferred route for most drivers last year and Pirelli expect the same to be the case this year, despite having replaced the soft tyre compound with the medium

However some teams are concerned about how long they will be able to make the super-soft tyres last, including Ferrari. Alonso said the weekend so far has been “harder than usual”.

“Up until now we have always had a good race pace,” he explained. “Both yesterday and today we suffered on the long runs and that means we must absolutely improve for tomorrow.”

“We have a few problems with the tyres which we are unable to manage as well as the others: there?óÔéĽÔäós a lot of graining and if you push very hard in the first sector you almost risk being unable to finish the lap. We will have to find the right compromise to get them to survive the number of laps proposed by our engineers, because the ideal strategy is still a two stop.”

Mercedes are more positive about their chances for tomorrow’s race which should give them a chance to regain ground lost to Ferrari in the constructors’ championship and perhaps even take on Red Bull. “Our high-fuel performance in Friday practice looked pretty strong and I am sure we can have a reasonable race on that basis,” said Ross Brawn. Another team to keep an eye on is Force India, as Paul di Resta was able to run longer on the super-softs than many of his rivals in Singapore. He’s hoping for more of the same tomorrow.

“We?óÔéĽÔäóve been focussing more on our race pace ?óÔéĽÔÇŁ as we did in Singapore,” said Di Resta. “Hopefully that will pay off for us tomorrow because our long run performance and tyre wear yesterday appeared to be very good.”

The front-right tyre takes the most punishment at this track as Vettel almost discovered to his cost last year. Having locked up the tyre early on he had to take great care to preserve it later in the race.

He will start on the super-soft tyre, as will every driver who reached Q3, including Mark Webber despite his subsequent demotion to 13th. He admitted afterwards he’d “taken a bit of pace out of the car” in qualifying – i.e. sacrificed downforce to cut drag and improve his straight-line speed.

Here’s all the data from qualifying for the Korean Grand Prix:

What does the Korean Grand Prix have in store for us? Can anyone keep Vettel from another win? And how will the all-important start unfold?

Share your views on the race and the weekend so far in the comments.