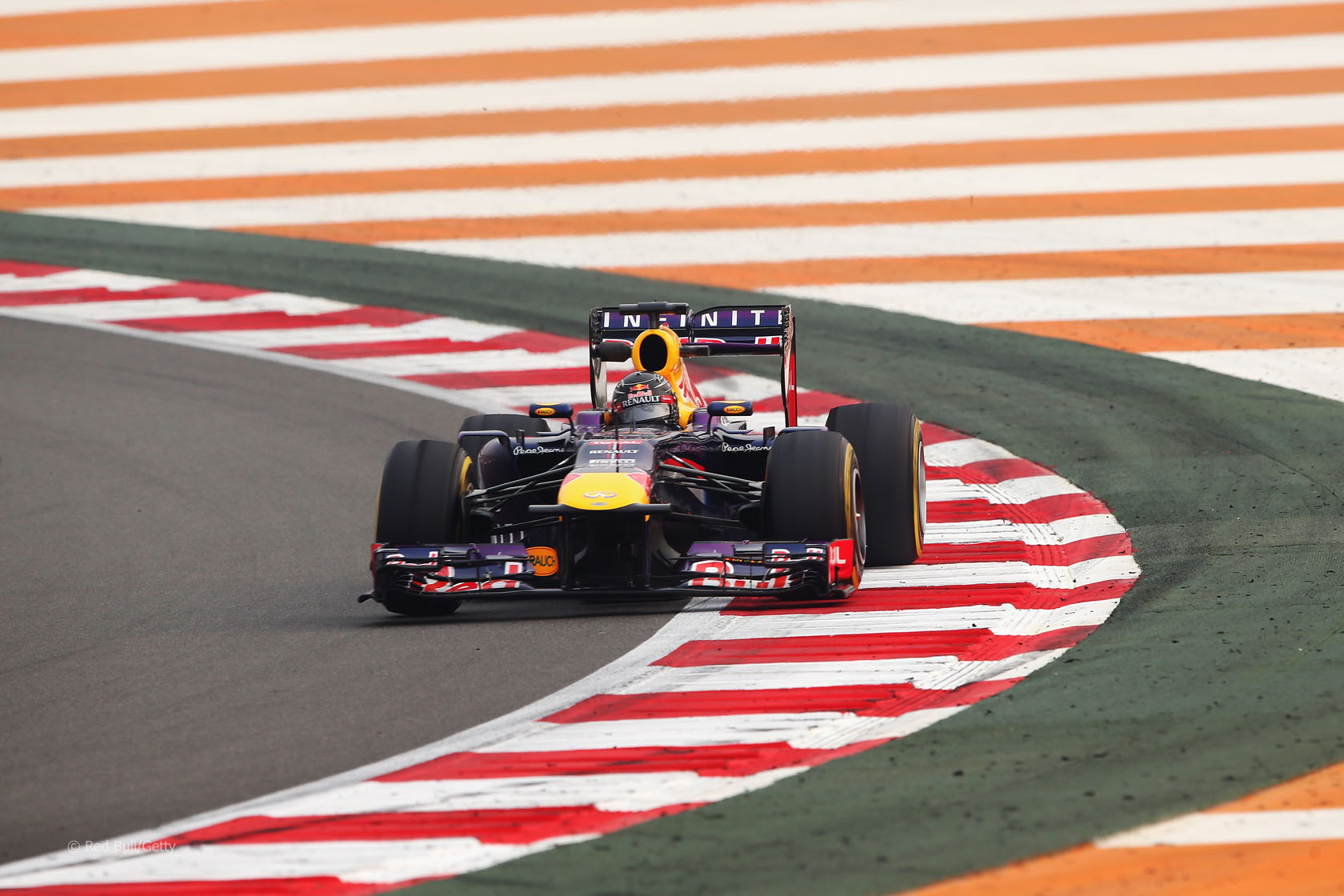 Just how far behind Red Bull’s rivals are at the Buddh International Circuit? The gap on the time sheets at the end of second practice was half a second. But it seems likely Sebastian Vettel left some of the RB9’s potential unexploited on his fastest lap on Saturday.

Several drivers found they got a better time out of the soft tyres on their second flying lap. Romain Grosjean, who was ‘best of the rest’ behind the Red Bulls, improved his time by two tenths of a second.

Vettel was also on course to improve on his second lap but dived into the pits before completing it. As the data below shows he set the quickest times in all three sectors and Grosjean was an ominous three-quarters of a second off his pace.

No doubt the picture will change on Saturday as we have often seen in the past. But realistically, whatever kind of fuel load Red Bull were running today, it’s hard to envisage any of their rivals threatening them tomorrow.

So Sunday’s race is likely to be a Red Bull benefit, much as the previous two races at the Buddh International Circuit were. But expect the tyre strategies to mark a departure from the previous races.

Pirelli have brought significantly softer tyres to this weekend’s race which should prevent it from being a one-stop race for most drivers as it has been before. The hard/soft combination has been replaced with medium/soft. But to really appreciate how big a departure this is, consider that the 2013 medium tyre compound is approximate to last year’s soft.

Given that, it’s no surprise the teams are finding this year’s soft tyre very fragile. Pirelli expect two or three pit stops per driver on Sunday. The front-left especially takes a pounding around the long turn ten and eleven right-hander.

In practice drivers found the tyre only lasted around half-a-dozen laps or so. Nico Hulkenberg exclaimed “Jesus that looks bad” when he saw the state of the blistering on his front-left when he came into the pits.

Most drivers did their longest runs on the medium tyres compounds. Fernando Alonso persevered with the soft for several laps and the rate of drop-off in his lap times on the chart below was much quicker than for those on the mediums.

“The [medium] tyre seems to last forever, while the [soft] tyre doesn’t” Button commented Button after practice. “There?óÔéĽÔäós a very big difference between the two tyre compounds so I think we?óÔéĽÔäóll see some very interesting strategies this weekend.”

Whether that happens depends on how many of the teams can make the soft tyre last long enough to only need one further pit stop after getting rid of them. The size of the performance gap between the two will likely lead drivers to run the soft for the first stint then switch to the medium for the rest of the race.

But however the strategies play out the battle for victory is surely going to be a Red Bull-only affair.

Here’s all the data from practice for the Indian Grand Prix:

18 comments on “Red Bull even further ahead than it looks”