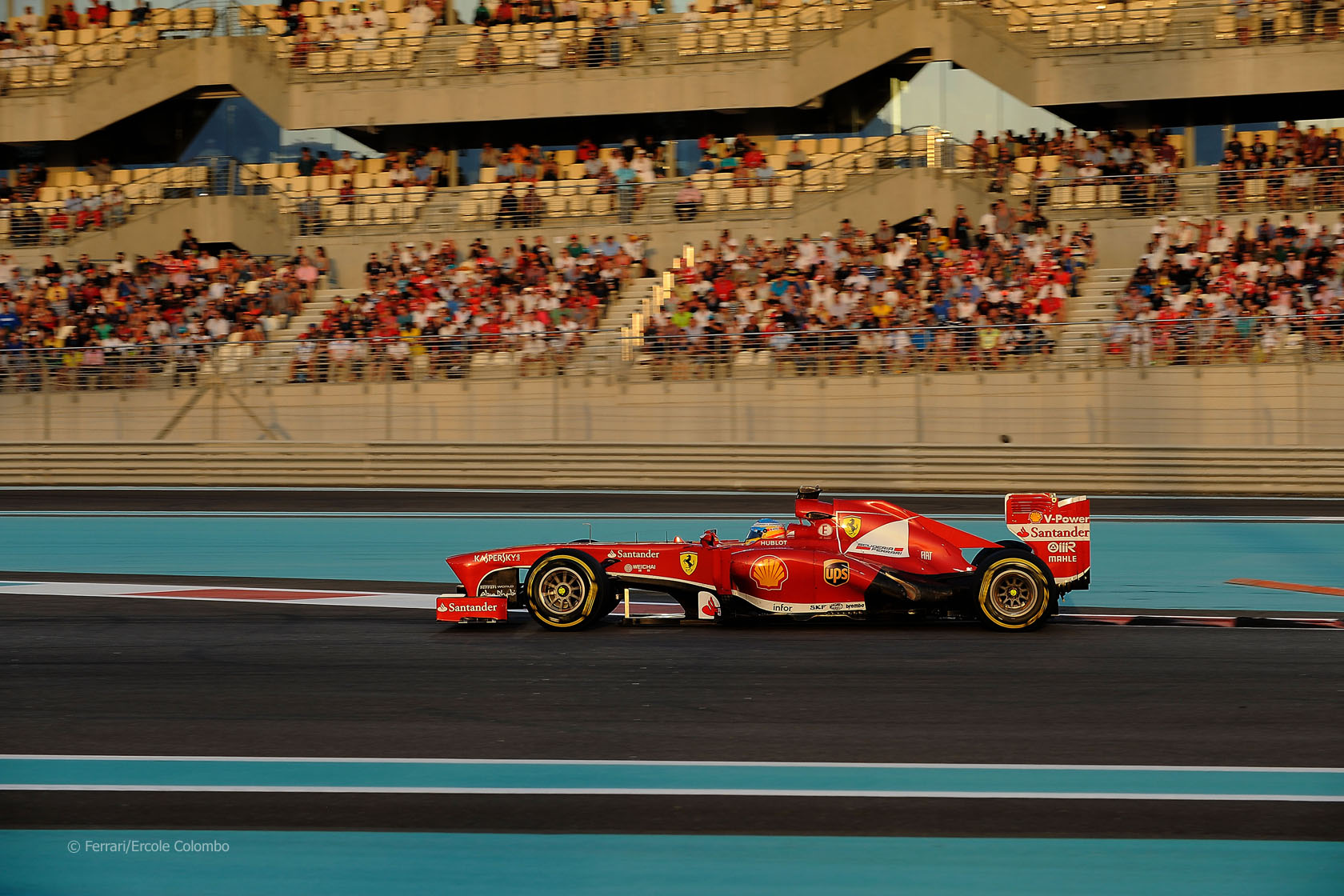 Two records were broken in the Abu Dhabi Grand Prix – and neither of them were taken by Red Bull or Sebastian Vettel.

The record for most consecutive points scores by a team fell for the second time this year, this time to Ferrari. The claimed their 65th points haul in a row, going one better than McLaren managed earlier this year.

Both teams began their streaks in 2010 when points were first awarded for ninth and tenth places. Red Bull’s last no-score was in Italy last year.

Max Chilton broke Tiago Monteiro’s record for most consecutive race finishes at the start of an F1 career. Chilton has finished the opening 17 rounds of his first year in F1, one more than Monteiro managed with Jordan in 2005. However for the 11th time this year the big prize went to Sebastian Vettel. He has equalled his personal best wins tally from 2011 with two races to spare.

In an even greater achievement, he equalled the most consecutive races won any driver in F1 history with his seventh in a row.

As noted here previously Alberto Ascari won nine consecutive starts in 1952 and 1953, missing the 1953 Indianapolis 500 which counted towards the world championship but was not run to F1 rules.

Vettel has been undefeated since the summer break:

Here’s how his run compares with the most successful streaks of the only other drivers to win seven in a row:

Vettel’s win was the 37th of his career, leaving him four short of Ayrton Senna’s tally of 41.

He was beaten to pole position by Mark Webber, who equalled fellow Australian Jack Brabham’s tally of 13, which is also shared by Graham Hill, Jacky Ickx, Jacques Villeneuve and Juan Pablo Montoya.

Both Red Bull drivers finished on the podium meaning the team took their 20th podium finish this season and their 100th of all time. Fernando Alonso failed to reach Q3 for the first time this year, meaning Vettel is the only driver left to have got into Q3 at every race this year. He and Felipe Massa are now tied 8-8 in qualifying (Massa was unable to set a time in Monaco).

Alonso did claim fastest lap, his 21st, which moves him back level with Vettel, as well as Gerhard Berger.

Kimi Raikkonen became the third driver to be excluded from a qualifying session this year. The others are Mark Webber (Chinese Grand Prix) and Paul di Resta (British Grand Prix).

Nico Rosberg has turned the tables at Mercedes: having spent the entire race ahead of Lewis Hamilton he has now led his team mate on track for more laps than Hamilton has this year.

With three third places and one fourth, Romain Grosjean has scored half of his points this season in the last four races.

Jenson Button has completed 999 racing laps so far this year, more than any other driver. Giedo van der Garde has the least with 807.

With just two races to go in 2013, we are still yet to see wet weather tyres being used for any racing laps this year.

Spotted any other interesting stats and facts from the Abu Dhabi Grand Prix? Share them in the comments.

79 comments on “Ferrari and Chilton break records in Abu Dhabi”