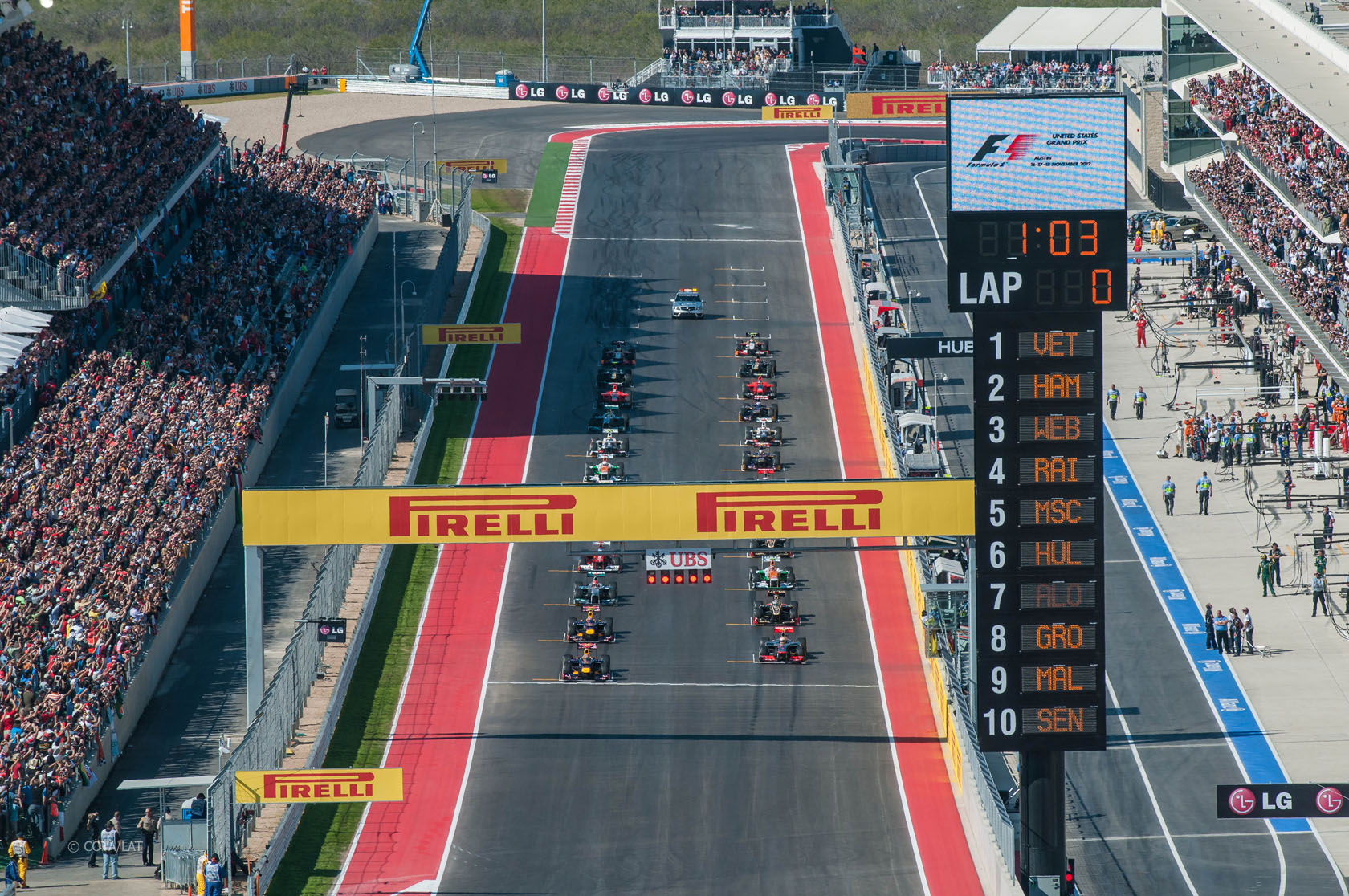 The antiseptic Yas Marina Circuit served up another forgettable Abu Dhabi Grand Prix but fans can look forward to two of the most interesting venues on the calendar to round out the season.

After dominating every race since the summer break in August, the seemingly unstoppable force of Red Bull and Sebastian Vettel is now on the verge of achieving an unprecedented eighth successive grand prix victory.

But while the four-time world champion has his eye on making history, many of his rivals are still locked in close battles to determine the final standings in the constructors’ championship, with Mercedes and Ferrari separated by just 11 points with up to 86 available in the final two rounds.

This weekend also marks F1?óÔéĽÔäós return to the impressive Circuit of the Americas ?óÔéĽÔÇŁ perhaps the most important addition to the calendar in recent seasons. After last year?óÔéĽÔäós inaugural race proved a great success, this weekend will prove to be a major test as to whether Formula One really has finally found a permanent home in the United States.

Featuring a mix of high-speed sweepers, long straights, short, sharp turns and plenty of overtaking opportunities, Austin?óÔéĽÔäós purpose-built F1 facility is a hit with drivers, teams and, most importantly fans. Last year?óÔéĽÔäós event was one of the most popular races of the season.

Circuit of the Americas circuit information

Circuit of the Americas track data in full

Inspired by sections of some of F1?óÔéĽÔäós classic circuits, the first sector of the circuit in particular ?óÔéĽÔÇŁ an homage to Silverstone?óÔéĽÔäós Maggots-Becketts-Chapel sequence ?óÔéĽÔÇŁ is unquestionably the most challenging for drivers, machinery and tyres.

“The first sector of this circuit ranks as one of the best parts of a racetrack anywhere in the world,” says McLaren?óÔéĽÔäós Jenson Button. “The first corner is really tricky, because it’s steep and blind, after that, the circuit just winds through an incredibly fast switchback until the heavy braking for the back straight.”

As in 2012, Pirelli have nominated the medium and the hard compounds for the sport?óÔéĽÔäós return to the States, which will hopefully allow drivers to push throughout the race and emulate the level of overtaking and action we saw here last year. One-stop strategies were the order of the day last year but Pirelli suspect the softer compounds this year will lead most drivers to make two stops.

Yet again, Sebastian Vettel is the man to beat heading to one of only two venues remaining on the current calendar where he hasn’t yet claimed victory (the other is Hungary). Last year he was quickest in all the practice sessions and throughout qualifying – but a moment’s delay behind Narain Karthikeyan in the race cost him victory.

With just two races of his 12-season Formula One career remaining, Mark Webber will be looking to bow out of the sport with another win or two. Webber would not desire a gift win from his team mate, nor is he likely to get one, so it’s going to take a monumental effort for him to put a stop to Vettel’s incredible run of success. With Mercedes currently holding second in the constructors’ championship by just 11 points, Ferrari will be looking to maximise their position this weekend to try and take the fight to the silver team into Interlagos.

That will be a tall order for the Scuderia, given that Fernando Alonso failed to make it through to Q3 last time out in Abu Dhabi. But with overtaking around Austin certainly possible, another poor Saturday showing would not necessarily spell disaster for them.

Team mate Felipe Massa can enjoy his final two races for the Prancing Horse in the knowledge that he will be returning to the F1 grid in 2014 with Williams. Having out-qualified Alonso around Circuit of the Americas last season before the team infamously chose to deliberately incur a grid penalty on his car, Massa will be looking to replicate the form he showed here a year ago this weekend.

For an event that Sergio Perez describes as his “home race”, this should have been a weekend to look forward to for the Mexican. Instead, Perez heads to Austin with all signs pointing to his time with McLaren coming to an end ?óÔéĽÔÇŁ although neither the team, nor the man himself seem willing to formally confirm this as the case just yet.

“For me, this will be the most important weekend of my year, and I’ll be especially keen for a strong result to send my fans back home with a smile on their faces,” said Perez. Lotus’s hopes of challenging Ferrari for third place in the constructors?óÔéĽÔäó championship appeared to have been snuffed out completely with the news that Kimi Raikkonen will not race the two remaining races of the season.

With no replacement having yet been announced, it seems likely their third driver and 2012 GP2 champion Davide Valsecchi will be called up to make his grand prix debut in the United States.

He’s had relatively little track time in the E21 besides the Silverstone Young Drivers?óÔéĽÔäó Test in July and a brief testing appearance in March. Limited testing makes life very difficult for substitute drivers, as was clear when Jerome D’Ambrosio made a one-off appearance for the same team in Italy last year.

Raikkonen?óÔéĽÔäós loss is by no means a total disaster for Lotus as Romain Grosjean has shown impressive form during this final flyaway leg of the season. Having just missed out on a fourth successive podium in Abu Dhabi, Grosjean will have his sights trained on the podium again in Austin.

The Circuit of the Americas holds happy memories for Lewis Hamilton, who took his final victory for McLaren here last year in satisfying style, snatching it from Vettel’s clutches wirth an opportunistic pass.

While it may be difficult for Hamilton to replicate that feat this weekend, Nico Rosberg’s strong Abu Dhabi run should give Mercedes hope that they may be able to put some pressure on the Red Bulls, or at least finish as best of the rest. Having gained on Force India over the start of the flyaway rounds of the season, Sauber?óÔéĽÔäós challenge for sixth place was hampered in Abu Dhabi when Nico Hulkenberg received a drive-through penalty for an unsafe pit release.

Hulkenberg needs to bounce back from that disappointment and take points once again at a circuit he enjoys, while Esteban Gutierrez will be hoping that the home support from visiting Mexican fans will be enough to spur him onto his second points finish of the season.

“I’m from Monterrey, which is quite close to Austin, being about one and a half to two hours away, so my family and also a lot of my friends will come to the event,” said Gutierrez. “This will give me additional motivation for the weekend and makes the atmosphere special.”

Following a disappointing period of races, Force India consolidated their improved home form in India with a strong points finish for Paul di Resta at Yas Marina after another aggressive one-stop strategy. But with the two hardest compounds in use for Austin, it?óÔéĽÔäós unlikely that the team will be able to go so far against the grain once again this weekend.

The Circuit of the Americas will also post a brand new challenge for Adrian Sutil, who has never driven a lap around the 5.5km circuit. “From what I’ve seen it appears to be one of the better new generation tracks so I’m looking forward to getting there and trying it for myself,” he said. Despite impressing enough to earn himself a contract extension for 2014, Valtteri Bottas only has two opportunities remaining to avoid becoming the first Williams driver ever to go an entire season without recording a top ten finish.

Pastor Maldonado’s run to 11th in Abu Dhabi, less than three seconds away from the top ten, will have given the team encouragement that a few more points could yet be salvaged from this desperate season.

After being announced as a race driver for the team next season, Daniil Kvyat will get his first run at a grand prix event for Toro Rosso this weekend in the first free practice session.

But with just one point to show from the last five races Daniel Ricciardo and Jean-Eric Vergne will have to wring every last drop of performance from the STR8 to score this weekend. They struggled to a lowly 16th and 17th in Abu Dhabi.

Caterham can expect to be a focus for local interest on Friday as reserve driver Alexander Rossi will have another practice outing, becoming the first American to drive at a US Grand Prix since Scott Speed for Toro Rosso six years ago.

“This is an important time in my career and the sport for America and another major step forward for me, to drive FP1 in my home country, in front of my own friends, family, supporters and fans,” said Rossi. “It means a lot to me that the team is giving me this opportunity, while trusting me with the responsibility and I want thank everyone who’s helped make this possible.”

With only two races remaining, it seems it will take a very bizarre set of circumstances to see Marussia drop tenth place in the constructor?óÔéĽÔäós championship to rivals Caterham. But with the team having lost out to their pit lane neighbours in the closing stages of the final race in 2012, Marussia will not be taking anything for granted in Austin.

“We’ve had a few days since Abu Dhabi to take a proper in-depth look at some of the issues we experienced there last weekend and we have some solutions in place to ensure we can attack the final two races with rather more confidence,” said team principal John Booth.

If you’re heading to United States for this weekend’s race, we want to hear from you.

Who do you think will be the team to beat in the United States Grand Prix? And will Vettel take an eighth consecutive win? Have your say below.

75 comments on “Will Vettel take a record eighth win in a row?”