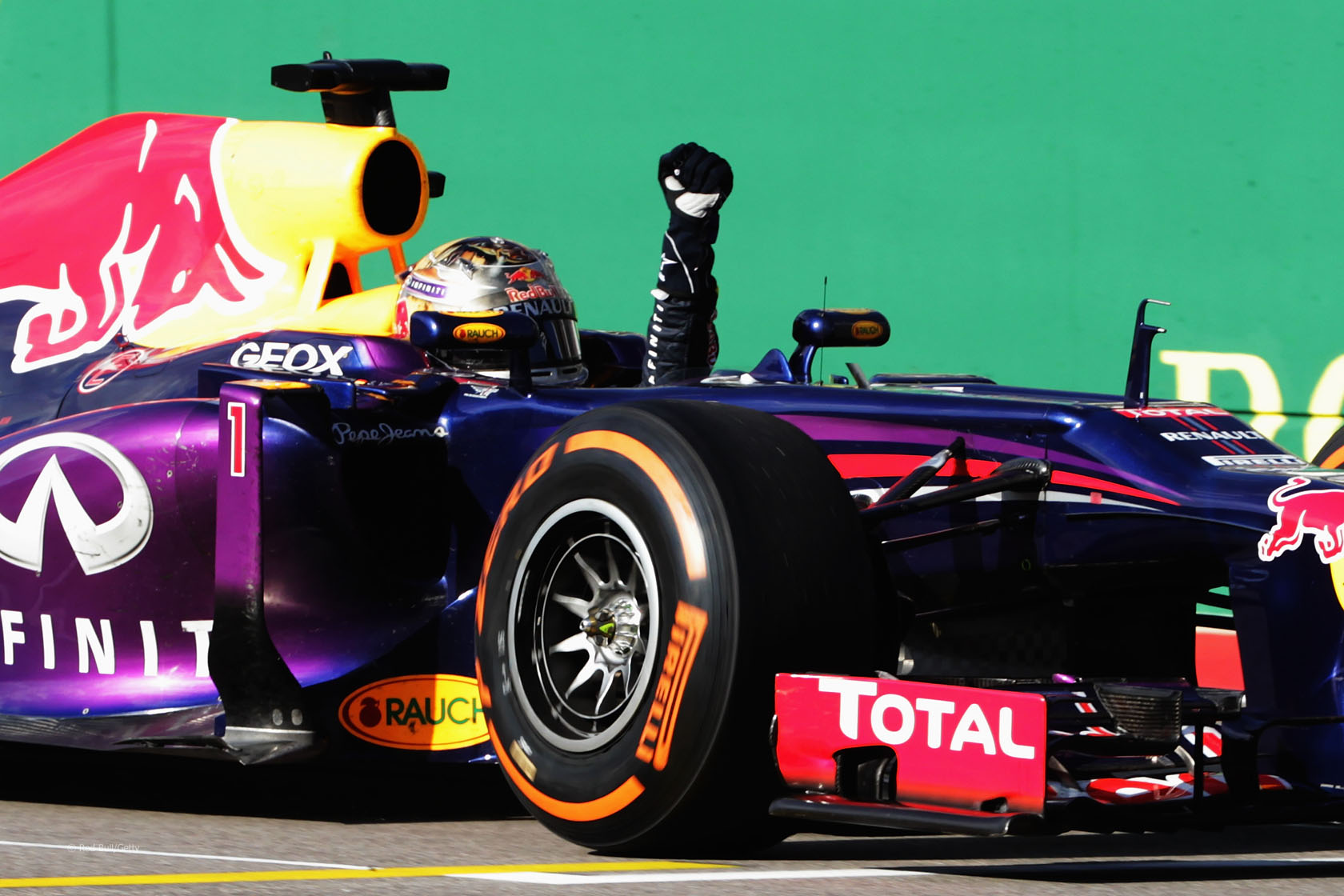 The United States Grand Prix played out as many expected it to, as another consummate display of superiority by Red Bull and Sebastian Vettel.

This was his twelfth victory of the year but the real significance lay in the fact this was the eighth consecutive round of the world championship he’d won – a feat which has never been achieved before, breaking a record which has stood for 60 years.

That Red Bull’s success was not quite complete was largely down to the efforts of one man. Romain Grosjean separated them at the start and was the only thing keeping them from another one-two when the chequered flag fell 56 laps later. This year as last, the outside line was the place to be on the run to the first corner. Grosjean passed Mark Webber as they arrived at turn one and Lewis Hamilton followed him through as well.

Fernando Alonso had been unable to get across from his starting position on the dirty side of the track onto the racing line, and had to cede a position to Sergio Perez. Valtteri Bottas and Paul di Resta appeared behind him – two more drivers who’d profited from starting on the clean side.

In his first race for Lotus Heikki Kovalainen took it easy at the start and his rivals exploited that caution. From eighth on the grid he fell four places and from then on rarely looked like a points contender.

As lap one drew to a close the Safety Car appeared on the track. Pastor Maldonado and Adrian Sutil had managed to tangle with each other on the longest straight on the track, firing the Force India into the barrier and nearly taking Esteban Gutierrez with him as he went. Sutil was unhurt, and afterwards the two equally careless drivers blamed each other.

Bottas in the mix

The Safety Car interruption deprived Vettel of his usual early lead but he soon restored it once the race got going again. Grosjean pulled away from Hamilton at a similar rate while Webber began to explore his options behind the Mercedes.

He got by on lap 13 as Hamilton, to his obvious dissatisfaction, was increasingly preoccupied with making sure his tyres lasted long enough that a single pit stop would be sufficient for him to reach the end of the race.

This was the goal for most of the drivers on a day when track temperatures were hotter than they’d been all weekend. Heading to the grid Hamilton pointed out to his team it was likely they’d end up converting to a two-stop strategy – an eventuality which ruined Mercedes’ race at this track 12 months earlier.

Hamilton’s tyre-saving paid off, as by the time he came in on lap 25 most of the drivers behind him had already been in. Alonso was in the next time by, having reeled off four quick laps to jump in front of Perez.

Bottas pitted the lap after Perez and his engineer urged him to pull out a few quick laps to jump Alonso. It never really looked likely, but what a rarity for 2013 for a Williams driver to be racing on equal terms with a McLaren and a Ferrari. The stunning performance of the Red Bull RB9 extracts a high price from its tyres. Vettel’s were thoroughly depleted when he came in on lap 28, exactly halfway through the race, and as usual race engineer Guillaume Rocquelin repeatedly reminded him on the radio to exercise self-discipline.

Freed of Hamilton, Webber was now able to close on Grosjean but as usual was held back by the RB9’s only real weakness. It is not the most effective tool for overtaking, particularly later in the race when the fuel load has reduced. “The DRS in the end was a little bit short on the ratios,” he said afterwards, “but in the end that?óÔéĽÔäós how you get the ratios for the whole race”.

Alonso had no such problems as far as Hulkenberg was concerned, passing the Sauber driver for fifth on lap 45. But as he tried to close on Hamilton he found the Mercedes driver had an answer for everything he threw at him.

As the race reached its final laps Alonso found himself being caught by Hulkenberg again. As the last lap began Hulkenberg’s Sauber darted down the inside of the Ferrari at turn one. “I passed him, but then I just missed the apex and he was able to get me back at the exit,” rued Hulkenberg afterwards.

Perez and Bottas were next, the Williams driver claiming his first F1 points in fine style with eighth place. Rosberg picked off Di Resta for an eventual ninth place, but disappointingly over half a minute behind his team mate.

Jenson Button moved forwards from a lowly grid position of 15th to claim the final point by passing Daniel Ricciardo. The Toro Rosso driver came under attack from his team mate on the final lap, but Jean-Eric Vergne managed to tangle with Gutierrez and was later penalised.

A poor race for Felipe Massa saw him make a second pit stop after his tyres went off. He was classified 12th after a weekend in which he never mastered the Ferrari the way his team mate did.

A tough return to F1 for Kovalainen saw him classified 14th after pitting for a new front wing and struggling with a KERS glitch. He was unable to contribute to Lotus’s faltering pursuit of Ferrari in the constructors’ championship. His team mate did, however – a fine second for Grosjean equalled his best career result and extended his string of top-four finishes to five in a row.

But Vettel’s unique achievement of winning eight races in a row was the greater story. While it’s certainly disappointing that the second half of this season hasn’t been as competitive as the first, Vettel’s impeccable performances show true class.

For the third time he signed off with a few doughnuts, some recompense to the crowd for the shortage of action they’d seen in a grand prix which fell well short of the standard established by last year’s corker of a race.

“People tend to forget how much work there is behind all these this and how special it is,” said Vettel afterwards, trying to put his latest record-smashing feat into some perspective. “I remembered back in 2008 how happy I just was to, once in my life, to be on pole.”

“I think you should never lose the passion and the joy,” he added, “and always remember the days when you were just dreaming of these things to happen”. In Austin his rivals could only dream of beating him.