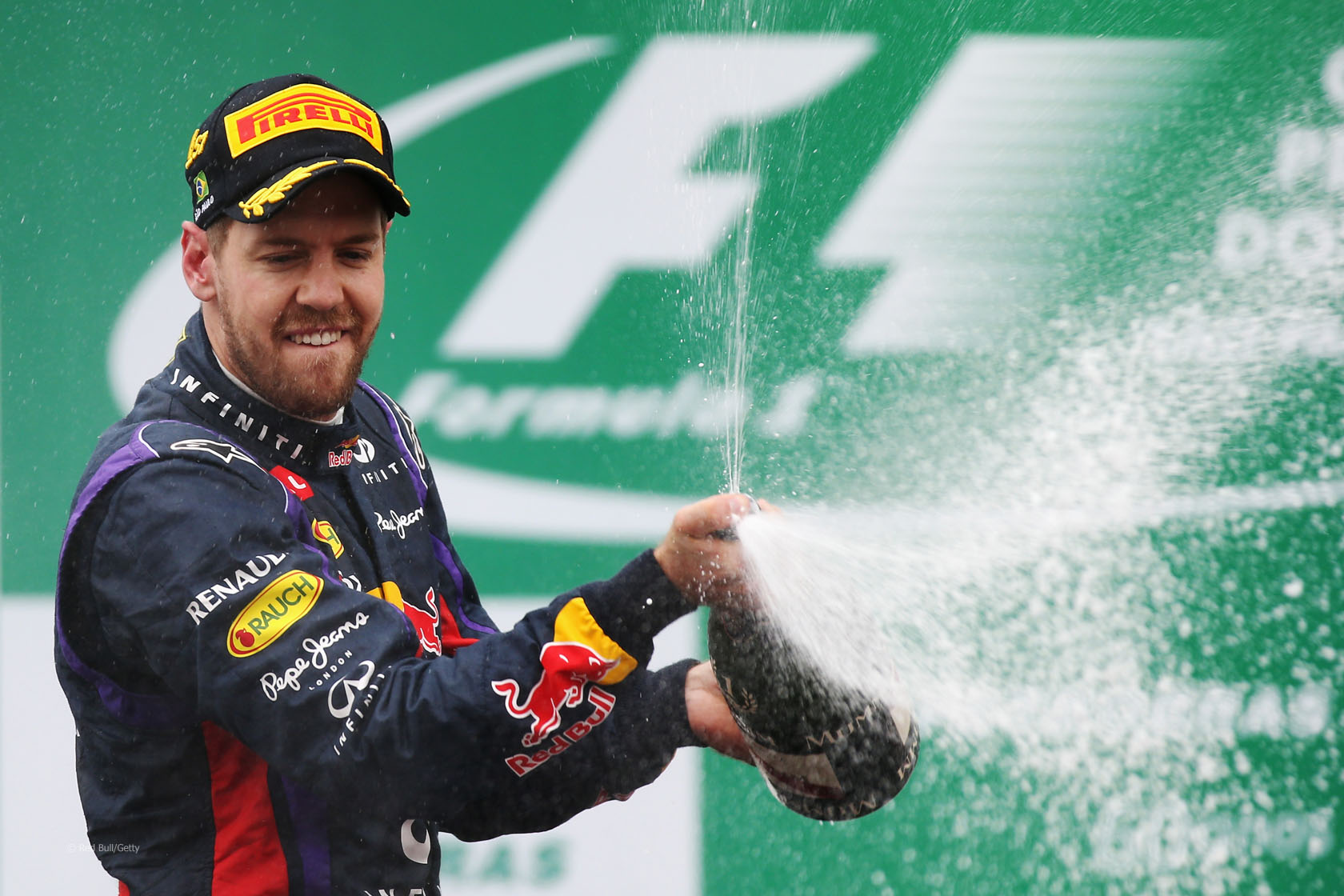 Sebastian Vettel has rounded out the 2013 season in typically dominant fashion, taking his ninth victory in succession at the Brazilian Grand Prix.

Vettel was joined on the podium by team mate Mark Webber, who finished his last ever grand prix in second place to record the fourth Red Bull one-two of the season. Fernando Alonso rounded out the top three for Ferrari.

At the start, it was Nico Rosberg who jumped from second on the grid into the lead at the Senna Esses. The Mercedes driver?¾įķ╝įõ¾s lead was short-lived as Vettel easily caught and passed his compatriot at the end of the first lap.

On lap three, Romain Grosjean’s Renault engine expired in dramatic fashion heading up the hill, ending the Lotus driver’s race and season and leaving a thick plume of white smoke across the track. Thankfully, the field made it through without any further incident.

Having been passed by Vettel, Rosberg began falling backwards through the field. First Alonso, then Webber caught and passed the Mercedes, before Rosberg allowed team mate Lewis Hamilton through for fourth.

Webber was soon on the back of Alonso, passing the Ferrari on lap 13 to make it a Red Bull one-two at the front of the field, with a gap of around ten seconds separating them. But Webber?¾įķ╝įõ¾s efforts were rendered moot at his first pit stop, as the team were slow to replace his left-rear tyre, allowing Alonso to retake second.

After Webber caught and re-passed the Ferrari on lap 26, the battle between Lewis Hamilton and Felipe Massa for fourth place was brought to a swift conclusion when the Ferrari driver was given a drive-through penalty for crossing the white line at pit entry.

Rain threatened to make its usual Interlagos appearance and was Nico Hulkenberg heard reporting spots of rain to his team over the radio. Seemingly with this is mind, the front runners appeared to be looking to stretch their second stints as long as possible, with Vettel dropping pace so significantly, Adrian Sutil and Daniel Ricciardo both unlapped themselves by passing the leader.

Suddenly, on lap 47, there was drama as Valtteri Bottas and Lewis Hamilton collided in the braking zone of Descida do Lago, ending the Williams driver?¾įķ╝įõ¾s race on the spot and forcing the Mercedes to cruise back to the pit lane on three wheels. Hamilton was later given a drive-through penalty for causing the collision.

With the threat of a Safety Car, both Red Bull and Ferrari called their drivers in to pit. But the apparent late call almost caused disaster for Vettel as the race leader arrived in his box with his mechanics still scrambling to get his new tyres ready. The ensuing hold-up cost Vettel a number of seconds as well as Webber, who was forced to queue behind, allowing Alonso to pressure the Australian once more.

Teams continued to keep their eyes on the sky as the threat of rain appeared to be getting ever greater, but in typical 2013 fashion, the race remained dry. Vettel maintained his composure and counted down the laps to end his record-breaking season with his ninth straight win, with Webber bowing out of F1 with a strong last drive to second and Alonso taking a well-deserved third.

Jenson Button took McLaren?¾įķ╝įõ¾s best result of its forgettable season with a superb drive from 14th to fourth. Rosberg secured second place in the constructor?¾įķ╝įõ¾s championship for Mercedes in fifth, Sergio Perez took sixth place after starting 19th and Felipe Massa ended his eight-season stint at Ferrari in seventh. Hulkenberg and Hamilton rounded out the points finishers.