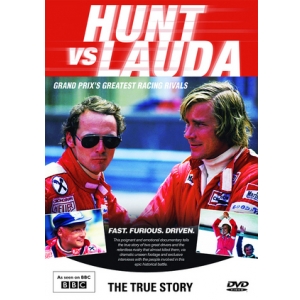 Just how many different ways does the story of the 1976 Formula One season need to be told?

As well as being the focus of last year’s feature film Rush it also forms a significant part of the recently released 1: Life on the Limit.

Taking advantage in the surge of interest in the remarkable story of James Hunt and Niki Lauda’s fight for that year’s championship comes another documentary, appropriately titled Hunt vs Lauda.

The 52-minute feature originally aired on the BBC last year and has now been released on DVD. As documentaries go it’s fairly typical – classic race footage, a few contemporary interviews and a smattering of new material.

Having recently sat through 1: Life on the Limit, in which it seemed nearly every living world champion was wheeled out merely so their names could appear in the credits, I especially appreciated the choice of interview subjects being kept to a minimum of well-chosen figures.

Lauda appears, as does his 1976 team principal Daniele Audetto, and Audetto’s opposite number at McLaren Alastair Caldwell. All contribute much of interest, but it’s hard to say the same of Hunt’s sister Sally Jones. Veteran Formula One correspondents Simon Taylor and Peter Windsor (the latter also a consultant for the programme) provide the necessary expertise. For Rush, scriptwriter Peter Morgan and director Ron Howard chose to sacrifice or embellish some elements of the Hunt-Lauda story in the process of converting it from reality to cinema. The product was a dramatic vision of their rivalry which was not wholly authentic but successfully reached an audience beyond dedicated Formula One fans.

I thought that film’s divergences from the real story were sparing and generally respectful to its subjects. But if Rush took too many liberties with the truth for your taste, or if it left you wanting to know more about that season, you should enjoy this video.

Hunt vs Lauda fills in the blanks left by Rush: details such as Lauda’s tractor crash early in the season which left him with broken ribs, Hunt’s controversial win at Brands Hatch and its later annulment after Ferrari’s appeal, and the dubious circumstances of Hunt’s relegation to the back of the grid at Monza – though the latter tale could have been fleshed out a bit more.

The undercurrent of respect between the two protagonists comes across better here than it did in Rush, as does the growing rivalry between two of F1’s great teams. It may say Hunt vs Lauda on the box, but the story inside is as much McLaren vs Ferrari.

Being a short, made-for-television documentary it proceeds quickly, and only the most significant races from the season are featured. There isn’t time for much pre-1976 background either.

One factual error stood out in the script – Hunt needed to finish fourth, not third, to win the title in the deciding race at Fuji following Lauda’s retirement. Oddly, the same mistake appeared in 1: Life on the Limit as well.

That aside this makes an excellent companion to Rush, adding in much useful information for those who want to learn more of the full story behind one of F1’s most remarkable seasons.

16 comments on “Hunt vs Lauda: The True Story DVD reviewed”