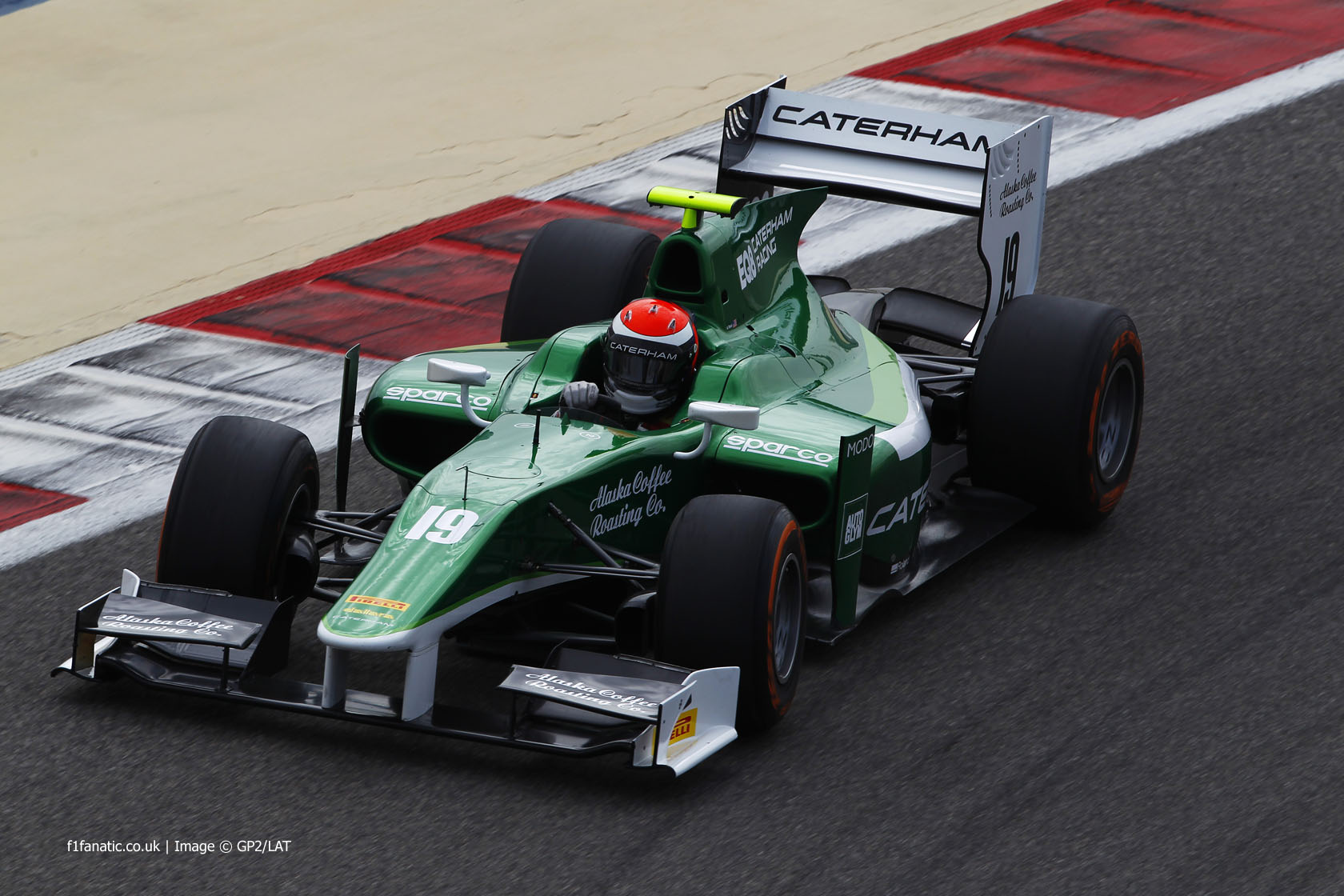 Once it seemed as though winning the GP2 championship, or even finishing runner-up, was a ticket to a seat in Formula One.

But that hasn’t been the case in recent seasons. Fabio Leimer and Davide Valsecchi were both spurned by teams after their GP2 title wins in the last two seasons. Valsecchi couldn’t even get Lotus to give him two races in their car at the end of last season when the opportunity arose, despite ostensibly being their third driver.

GP2 drivers who have made the transition recently did so more for the backing they brought rather than the promise they showed. But the arrival of some highly exciting new talents into the series may change that.

Ferrari, McLaren and Williams have placed the latest products of their driver development programmes in the championship, Force India are taking an interest via Hilmer and Caterham maintain a presence in the sport as well.

Even so the depth of quality in the field has been sapped by the loss of other impressive talents from recent seasons including James Calado, Tom Dillman, Sam Bird and Robin Frijns. Meanwhile other drivers who showed conspicuously less promise head into their second, third or even fourth years.

As it begins its tenth season this weekend GP2 needs to reaffirm its place as a competition between the best young stars of the future, rather than a parade of the most competent pay drivers.

Mitch Evans – the 2012 GP3 champion – embarks on his second season in GP2 having moved to reigning champions Russian Time. Driving for Arden last year he beat proven race winning team mate Johnny Cecotto Jnr and picked up four podiums. Generally finding himself towards the top of the testing times, Evans is one to watch.

Having finished second in German Formula Three last year, Artem Markelov is making the leap to GP2. He has failed to match Evans so far in testing but the team will hoping for some solid finishes.

Alongside his reserve role at Williams, Felipe Nasr will embark on his third full season in GP2 and his second with Carlin. He is still looking for that elusive first victory after scoring points in 16 of the 22 races last season, including six podiums. Testing has shown he should be towards the front again this season.

Julian Leal moves to his fourth different team in as many seasons. F1 teams generally prefer drivers who attain success quickly in GP2, and he will have to produce something spectacular to get noticed. He has been close to Nasr in testing and could find himself closer to the front this year. Reigning European Formula Three champion Raffaele Marciello has the backing of Ferrari’s Driver Academy, making him one of the most anticipated rookie arrivals in the field. He takes over Leimer’s championship-winning car, so expectations will be high.

No one could have predicted the fall from grace that befell Stefano Coletti during 2013. Leading by 24 points after three wins the first eight eight races, Coletti only featured in the points once in the remaining rounds. Having moved to the team who produced the last champion he’ll be hoping to fight at the front again, but testing has been similar to his team mate – quick, but inconsistent.

Jolyon Palmer is another fourth-year driver in yet another different team. DAMS have produced Champions such as Romain Grosjean and Davide Valsecchi but had a lacklustre season with Marcus Ericsson last year. Palmer came on strong in 2013 with two wins, and testing has suggested he should be a championship contender.

Stephane Richelmi enters his third full season in GP2 and his second with DAMS. Richelmi took a second place in Britain and several other strong points finishes but Palmer appears to have an edge on him based on their testing pace. ART’s alignment with McLaren – they also run their MP4-12C GT3 cars – has led to the surprise arrival of 29-year-old Takuya Izawa in their team this year. He enjoys backing from Honda, McLaren’s future engine supplier, and has spent the last few seasons racing in Super GT and Formula Nippon with limited success.

McLaren had an embarrassment of riches in their Young Driver Programme last year as Stoffel Vandoorne finished runner-up to Kevin Magnussen in his first year of Formula Renault 3.5. Can he achieve a similar feat in GP2? Testing times have not indicated as much so far, but with access to McLaren’s impressive driver training resources expect him to make rapid progress.

Daniel Abt moves to Hilmer needing to make a quantum leap forward after a disappointing debut season. While team mate James Calado won twice on his way to third in the championship, Abt only scored twice and languished down in 22nd. He has shown better pace in testing and could be a candidate for regular points finishes.

Facu Regalia also moves to Hilmer from ART, however he has come from the GP3 series, where in his first full season he was runner-up to Daniil Kvyat. He doesn’t appear to have quite got up to speed with the more powerful car just yet.

Adrian Quaife-Hobbs will enter his second season, now with his third different team. He switched from MP to Hilmer in the middle of last year after the latter proved considerably more competitive, despite a podium and three other points finishes in the MP car. Meanwhile his Hilmer stint resulted in a further podium and a debut win in the Italian sprint race. However it has so far looked unlikely from the testing times that Quaife-Hobbs will get anywhere near that kind of performance, finding himself generally towards the back.

In his third season of GP2 Simon Trummer will not have to do much to improve on his meagre career points total of 24 to date and highest finish of sixth. So far there’s been little indication he might to do so.

Arden should represent a step forward for Rene Binder as he seeks his first podium finish. Just three points scores in 2013 left him 23rd in the championship, despite finishing every race he started. Expect another season in the midfield.

Andre Negrao is another to make his debut in the championship this season having switched from Formula Renault 3.5. In his three years in FR3.5 Negrao struggled, picking up just two podiums, however he clearly improved from year to year. Rio Haryanto struggled in a poorly performing Addax car in 2013 with just four points finishes, despite a strong outing at Silverstone that resulted in a podium. Now with Caterham – who have looked strong in testing – Haryanto needs to prove he can be a contender.

Alexander Rossi made his debut in the Bahrain round of the championship last season for Caterham and immediately impressed with a podium finish. A proven race-winner in GP3, Formula Renault 3.5 and GP2, and with close ties to the Caterham F1 team by being their test and reserve driver, Rossi must be hoping to claim the title and stake a claim to a place in F1. His lap times were positive in both tests and if the Bahrain session was anything to go by it may well be Haryanto vs Rossi in the opening round – they were four tenths clear of their nearest rivals, an unusual margin for a GP2 field.

Daniel de Jong remains with MP for a second full season. He has scored just twice in GP2 so far and so far it seems the best he might hope for this year is a few more points finishes.

Jon Lancaster showed considerably more promise in the other MP car during testing. Not having a contract may have spurred him on but Lancaster was easily consistently the best during testing, finishing third in Abu Dhabi and fourth in Bahrain. He has an opportunity to build upon the two wins already to his name and make a bid for the title.

Like Lancaster, Axcil Jefferies was another who tested without having a contract but was confirmed early on Wednesday morning to be driving the Trident car in Bahrain. Finding him at the bottom of the testing timesheets is no surprise given his lack of previous experience, and it will be a tough year and a steep learning curve for Jefferies, who is Zimbabwe’s first driver at this level of motorsport.

Alongside him will be Johnny Cecotto Jnr, whose name has all-too-often been mentioned in exasperated terms while describing his latest driving standards violation. Last year’s escapades included running Sam Bird off the road during Malaysia qualifying and being excluded from the Monaco sprint race after causing a 14 car pile-up at turn one during the feature event. Not unlike countryman Pastor Maldonado, Cecotto has interspersed his woeful moments at the wheel with impressive turns of speed. His dominant 2012 Monaco victory is one example, and testing gave some hope we might see more of the ‘quick Cecotto’ and less of ‘liability Cecotto’ this year.

Conor Daly was the third driver to run in testing without a contract and like Lancaster it was confirmed at the 11th hour he will race in Bahrain. Daly drove in the opening round only last season for Hilmer – scoring two points – before returning to GP3. A debut season with Lazarus probably won’t yield the results he wants but gives him an opportunity to potentially outshine the car and get himself noticed.

Campos make a return to the series after taking the team back from Addax – who took it over in 2008 – after the latter quit the sport following five seasons of mixed fortunes. Arthur Pic – younger brother of Lotus F1 test driver Charles – makes his GP2 debut following three adequate seasons in Formula Renault 3.5 in which he took a win and two further podiums.

There’s another familiar surname in the second car, but Kimiya Sato is no relation to Formula One turned IndyCar racer Takuma. Sato raced in the Auto GP World Series in 2013 finishing runner-up to Vittorio Ghirelli. Like his team mate Sato has been in the midfield and towards the back during testing leaving everyone guessing as to where Campos will end up on their return.

GP2 will follow Formula One in racing in Austria and Russia’s new street circuit this season. However these new rounds come at the expense at the Malaysian and Singapore rounds of the championship.

2013 was set to be the final year that GP2 used the Dallara GP2/11 chassis following the end of it’s three year cycle after it was brought in at the start of 2011. Series organisers have instead decided to keep it for another three year cycle however in order to cut costs.

The second and slightly more significant change – brought about to better prepare drivers for Formula One – is regarding the tyres. Drivers must now use both the ‘prime’ and the ‘option’ during the feature race whereas in previous seasons drivers had been allowed to use the compounds whenever they liked.

*Not signed to a team at the time of the test.

*Not signed to a team at the time of the test.

You can follow GP2 on F1 Fanatic Live during the races this year.

We also have a dedicated group and forum for GP2 fans:

And you can find tweets from all of the GP2 teams on drivers on Twitter here:

What do you think of the strength of this year’s GP2 field? Who’s your tip for the title – and a future in F1?