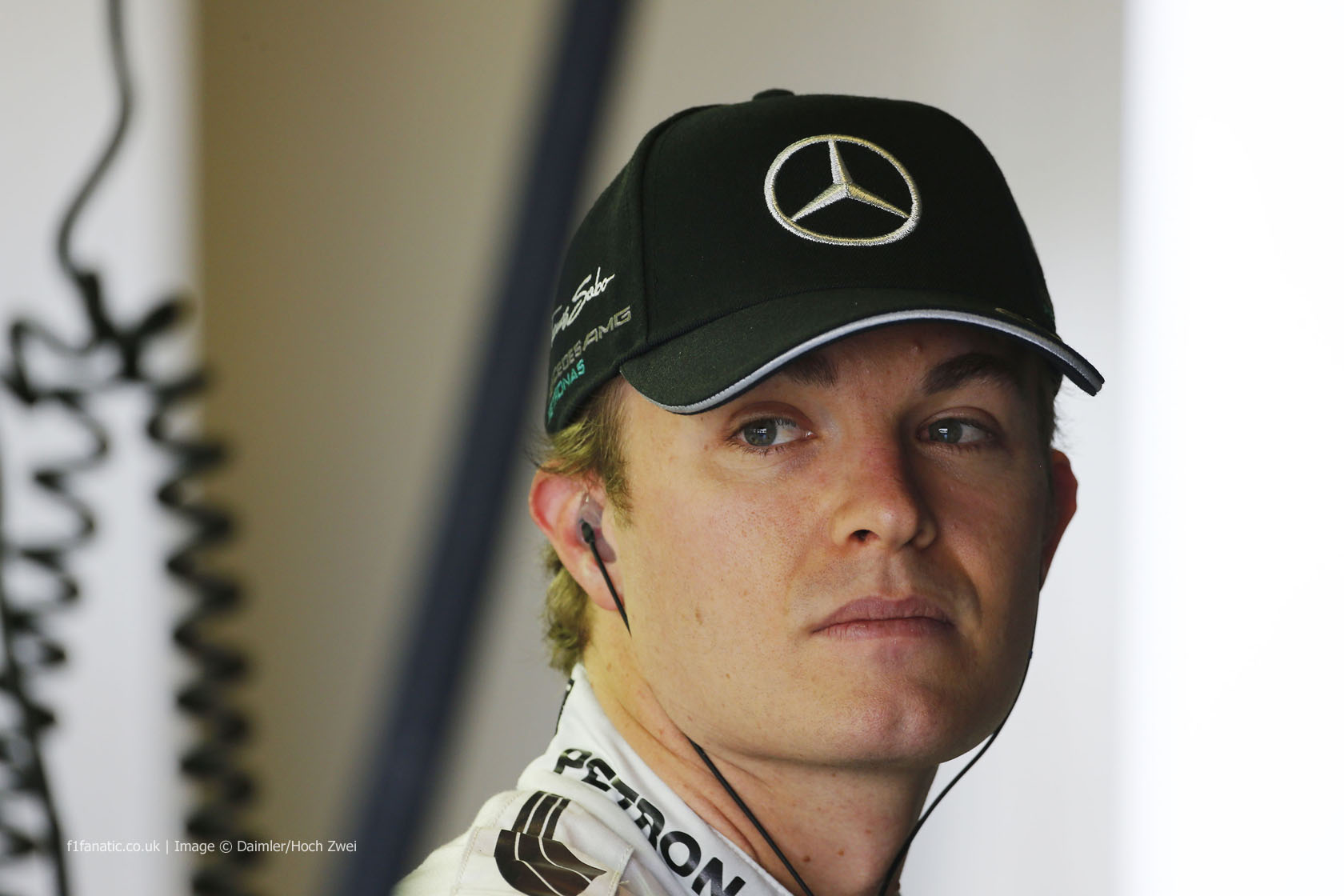 After the thrill of that race-long battle between the two Mercedes in Bahrain had subsided, Nico Rosberg cannot help but have felt a bit deflated.

That was a race he should have won. He put the W05 on pole position but Lewis Hamilton beat him to the first corner and brilliantly rebuffed each and every one of his team mate’s overtaking attempts.

Hamilton’s retirement in Australia means Rosberg holds enough of an advantage that he could finish second to his team mate again this weekend and still lead the championship. But in a title fight which is likely to be contested chiefly between the two Mercedes drivers, Rosberg knowns he needs to put one over his team mate sooner rather than later.

Shanghai could be just the place for him to do it. Rosberg has excellent form at this track: He led convincingly in 2010 before his Mercedes was overhauled by the faster McLarens. He did so again the following year, only dropping out of contention late in the race.

Then came that breakthrough performance in 2012, when Rosberg claimed his first pole position and race victory at the Shanghai circuit.

That race ran to a pattern which has become familiar at this circuit in recent seasons. Pirelli’s high-degradation tyres often coax teams into varying and conflicting strategies at this circuit.

This is also because the configuration of the pit lane makes it one of the most punishing of the season in terms of the amount of time drivers lose going in. That gives them an incentive to stay out for longer than usual on tyres that have passed their peak.

Last year the soft tyre compound wore out so quickly teams tended to run very short stints at the beginning or end of the race. Pirelli is bringing the same tyre mix this weekend, but as we have already seen they are less extreme than those used in 2013.

There are no changes to the DRS configuration this year, which features two separate zones, even though Shanghai’s enormous back straight meant there was never really a need for one to begin with.

This race marks the tenth anniversary of the first Chinese Grand Prix. The enormous capacity of the Shanghai International Circuit may not yet have been filled, but steady increases in the number of local fans have noted year-on-year.

It’s an especially crucial market for Mercedes as they pursue car sales in China’s rapidly-growing economy. They have powered three of the last four winners here, and the chances of them doing so again are extremely high. Red Bull started the week with a disappointment as their appeal against Daniel Ricciardo’s exclusion from the Australian Grand Prix was thrown out by the FIA.

However following his battling drive to fourth in Bahrain, Ricciardo’s keen anticipation for this weekend’s race remains undimmed.

He recalled how the long drag to the hairpin felt rather different in the junior categories he raced in at the track: “I always think back to when I came here as a kid in Formula BMW – massive hair and lots of enthusiasm – and trust me, then, it was the sort of straight where I’d have definitely been reaching for a book if I’d had one! It’s a bit different driving it in an F1 car.”

Rosberg may have good form in China but so does his team mate. “I’ve only finished outside of the podium places twice at this circuit,” said Hamilton, the winner of the race in 2008 and 2011.

But things haven’t always gone so smoothly for him at the Shanghai circuit. “In my first season in Formula One I threw away a championship lead here by going into the gravel coming into the pits,” he rued, recalling a pivotal moment in the 2007 campaign. The shock news on Monday that Stefano Domenicali had resigned as Ferrari’s team principal means F1’s most famous team has a new man at the helm for the first time in seven years.

Of course no one should expect immediate change now Marco Mattiacci has taken Domenicali’s place.

But Ferrari can hope for a better weekend merely for the simple fact of having moved on to a more standard track instead of Bahrain, whose many straights so brutally exposed the F14 T’s weaknesses. They should be back in the upper reaches of the points places. A repeat of Fernando Alonso’s win of 12 months ago is very unlikely.

And the thought of how their home race might unfold at another ‘power circuit’ in five months’ time must fill them with trepidation.

Pastor Maldonado left Bahrain with both Esteban Gutierrez and Jean-Eric Vergne unimpressed with his driving and a five-place grid penalty for carelessly blundering into the Sauber of the former driver.

However there was a glimpse of performance from the E22 in between his incidents which showed points might be possible sooner rather than later.

The post-Bahrain test was a stark reminder of how much work the team still have to do. Maldonado and Romain Grosjean covered just 16 laps each as problems persisted with the Renault Energy F1 power unit.

McLaren believe the cause of the clutch failures which halted both their drivers in Bahrain was a one-off problem.

Jenson Button said China is “not necessarily a track that perfectly suits our package” but anticipates a close battle behind the flying Mercedes pair.

“Bahrain showed that, the top two cars aside, the racing this year is fast, fraught and very evenly matched,” he said.

“The margins are so slim that it’ll require us to get everything right: a focused practice, problem-free qualifying sessions and a clean race to try and establish ourselves at the forefront of that chasing pack.” Sergio Perez’s fine podium in Bahrain and Nico Hulkenberg’s consistent points-gathering has propelled Force India to a best-ever second in the constructors’ championship.

The pair fought hard on the Sakhir circuit, but Vijay Mallya is content to let his drivers fight as the Mercedes duo did:

“I was asked a lot in Bahrain whether there were any team orders, but we preferred to let our drivers race and compete with each other,” he said. “They both raced hard, but fair.”

“In the final part of the race we saw great teamwork as Nico held back the charging Red Bulls who had the advantage of soft tyres. Ricciardo did eventually get ahead, but Nico helped Checo escape up the road and build a gap. So I was very proud of my drivers – they were outstanding in the race.”

Giedo van der Garde will have another run in first practice – this time in place of Adrian Sutil – as Sauber introduce further updates to try to score their first points of the season.

Meanwhile Esteban Gutierrez will have a new chassis after being rolled over by Maldonado two weeks ago.

Shanghai marks another new venue for Daniil Kvyat who impressed with another mature performance in Bahrain. Shanghai often sees mixed weather conditions but Felipe Massa says it would be to the benefit of him and his car if it stays dry:

Marussia moved back in front of Caterham in the last race but they would be having an easier time of things if Jules Bianchi, by far the quicker of their two drivers, stopped getting involved in so many incidents. Collisions in the last two races have left him leading the penalty points table.

“I am hoping all my bad luck is behind me now and that China will mark a turning point for a better rest of the season,” said Bianchi, who tangled with Sutil in Bahrain.

Caterham are also bringing a small upgrade to China but as with most teams a bigger step is planned for the return to Europe in Spain.

Are you going to the Chinese Grand Prix?

If you’re heading to China for this weekend’s race, we want to hear from you.

Who do you think will be the team to beat in the Chinese Grand Prix? Have your say below.

65 comments on “Rosberg’s chance to hit back at Hamilton”