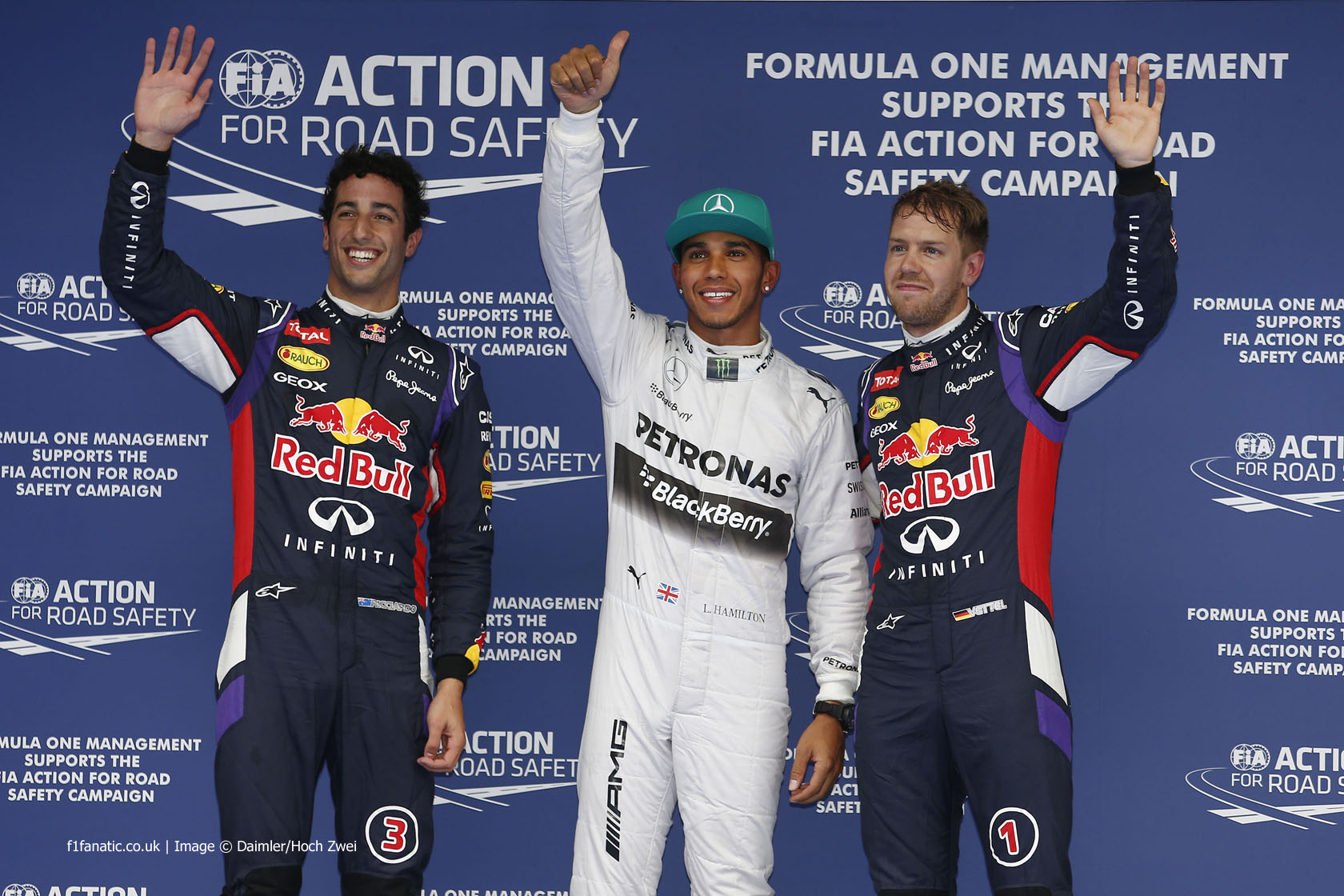 The two Red Bull drivers will line up behind him on the grid after Nico Rosberg made two mistakes in the final minutes of qualifying.

Formula One’s run of wet qualifying sessions continued in Shanghai. Apart from the last round in Bahrain – which, being held in a desert, naturally sees little rain – every contest for pole position has been held on a track that was at least damp.

That was certainly the case when Q1 began in Shanghai. Most drivers began the session on wets with a handful using intermediates.

In the final minutes the track conditions improved enough for intermediate tyres to be used. Adrian Sutil wielded them to good effect, and having been in the drop zone throughout much of Q1 made it through to the next phase.

The same could not be said for his team mate Esteban Gutierrez, who failed to make the cut.

Jules Bianchi was one of the first drivers to run in the intermediate tyres but spoiled is first lap by going wide at the final corner.

With both Caterhams and Marussias out in Q1 as usual, Pastor Maldonado joined them as Lotus were unable to change his broken engine from final practice in time.

The conditions continued to fluctuate in the second part of qualifying, with more rain falling including a fresh shower a few minutes before the chequered flag. This cost a few drivers who ended the session on intermediates and was a blessing for Nico Hulkenberg, who scraped through into Q3 thanks to the last-minute rain.

Hamilton ended the session quickest with Vettel a threatening second, just a few tenths of a second behind.

But the ever-changing grip levels on the track caught out several drivers. Among them was Kimi Raikkonen, who also had a downshift problem on his final run and ended up 11th, missing the cut for Q3.

Both McLaren drivers also failed to secure progression into the final ten – Jenson Button and Kevin Magnussen complained of a lack of grip from the intermediate tyres.

This presented an opportunity for Lotus to claim their first place in Q3 this year and Romain Grosjean seized it. The two Williams drivers also claimed places in the final ten.

The rain eased a little in time for the pole position shoot-out but even so Valtteri Bottas, Nico Hulkenberg and Jean-Eric Vergne opted for wet weather tyres for their first run. After that they joined their rivals in taking on intermediate tyres for their final effort.

Vettel set the first benchmark time but it was swiftly beaten by Hamilton, who found six tenths of a second. Rosberg slotted into second in the other Mercedes, and like his rivals opted for two flying runs at the end of the session.

But he made mistakes in the final sector on both of them. The number six car skidded wide at the turn 14 hairpin on Rosberg’s first run, and he failed to improve his time with his final effort after spinning at the last corner.

That left the door open for Red Bull to attack – led by Daniel Ricciardo, who was over half a second quicker than team mate Vettel. Not surprisingly, he said there was nothing left in the car as he returned to the pits.

That left Rosberg fourth of Alonso, but the Ferrari driver was over one-and-a-half seconds off the pace. The two Williams drivers were next, with Grosjean tenth for Lotus complaining of poor low-speed traction.