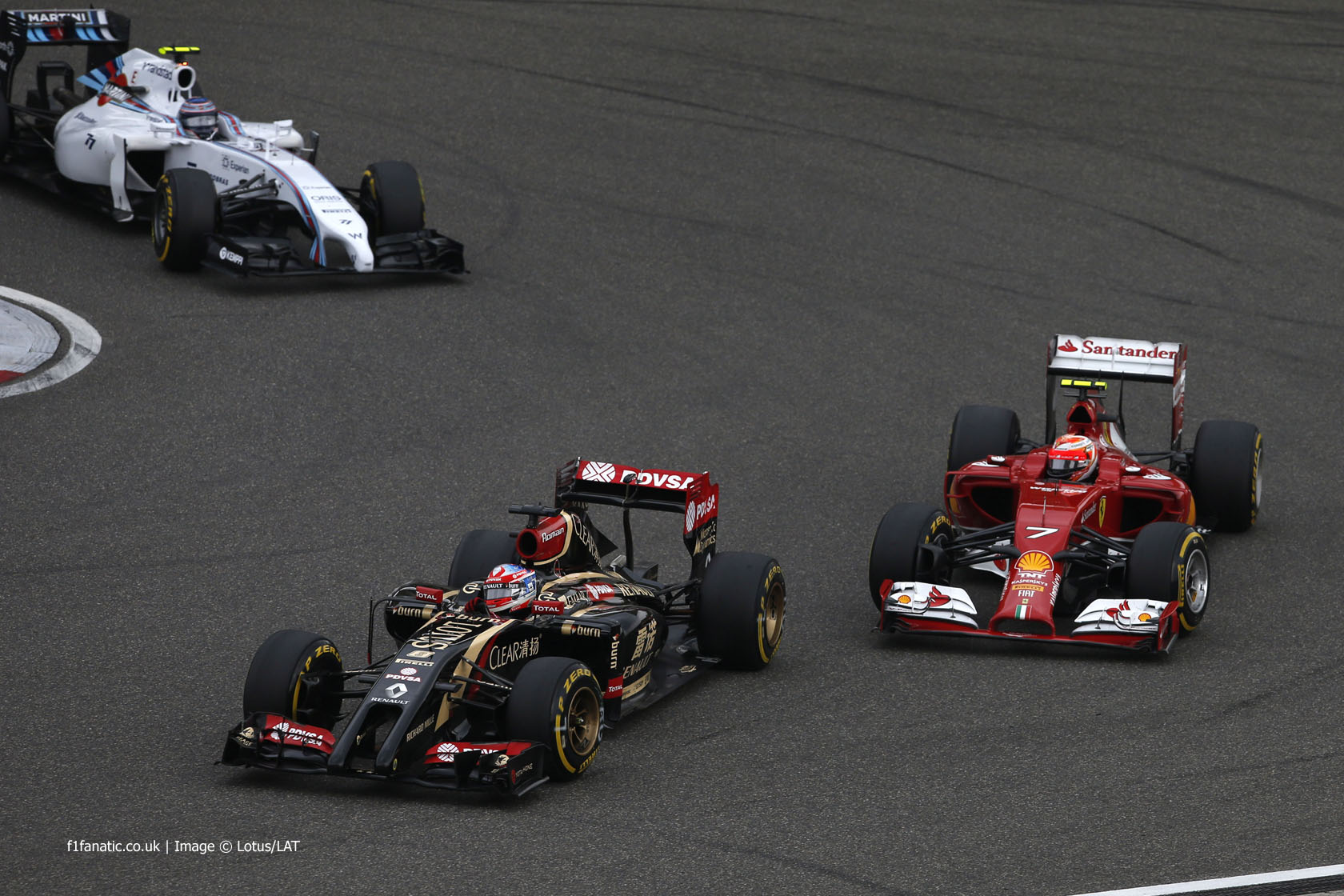 The Chinese Grand Prix may have been another point-less outing for Lotus but the green shoots of recovery at the team are clear to see.

Romain Grosjean took them into Q3 for the first time this year in Shanghai. The fact he was frustrated at his eventual starting position of tenth shows his aim has been raised considerably higher since their miserable start to the season in Melbourne, where both cars were ejected in Q1.

In Sunday’s race Grosjean spent almost every lap in the top ten until his fourth gear failed, forcing him to retire. But Pastor Maldonado reached the chequered flag, underlining the progress made by the team who just three races ago had only managed a total of 19 laps during practice.

“Romain had been running reasonably well in the points and able to race his rivals, and a points finish was realistic,” said trackside operations director Alan Permane. “Pastor did a great job from the back of the grid to finish in fourteenth.”

“For Barcelona we have more upgrades for the chassis and engine so we should be more competitive there.”

The data below reveals the progress Lotus have made compared to their rivals. Having begun the season firmly at the foot of the field, they are poised to get into the battle for the lower half of the points finishes.

It’s a motor racing truism that it’s easier to make a fast car reliable than to make a reliable car fast. If Lotus are the former, Sauber are definitely the latter. The overweight C33 covered more than three times as much ground as the E22 in testing, but as Lotus have moved to the front of the field Sauber are left with only Caterham and Marussia behind them.

Based on their results, McLaren’s form appears to be the opposite of Lotus’s. They began the year with a double podium finish (after Daniel Ricciardo’s disqualification) yet in China both drivers were lapped and finished out of the points.

But this was partly a case of McLaren taking advantage of their rivals’ problems in Melbourne: Red Bull and Mercedes each had a car retire, the Ferraris were slowed by electronic glitches and the Williams drivers were involved in incidents.

Racing director Eric Boullier says the team are confident of the gains which they will make in coming races and have an “interesting upgrade” planned for the Spanish Grand Prix.

Car performance in 2014 so far

This table shows how far each car was off the fastest lap achieved throughout the first four race weekends in all sessions (as a percent). Note that wet qualifying sessions on three weekends so far (Bahrain the exception) will have had an effect on the data. In particular, as Mercedes have tended to disguise their true pace on Fridays, wet conditions on Saturday means the full extent of their performance margin can remain hidden in this data.

This is also true in the races, where they rarely need to stretch themselves to pull away from their rivals. A late race Safety Car period in Bahrain gave a telling glimpse of their real advantage, as Lewis Hamilton and Nico Rosberg streaked away from the competition by more than 1.7 seconds per lap, despite also fighting each other for position.

The sheer scale of Mercedes’ advantage in Bahrain shows why they were happy to let Hamilton and Rosberg race each other freely. But if their rivals close the gap, Mercedes may become too concerned about staying ahead to allow their drivers to risk losing time and compromising each other.

The table below gives the average values for the data above to give a rank of each team’s performance so far. Again this probably underestimates just how much quicker Mercedes are.

It also compares their performance against their current championship positions, making it clear which teams are getting the most out of their packages – and who isn’t: