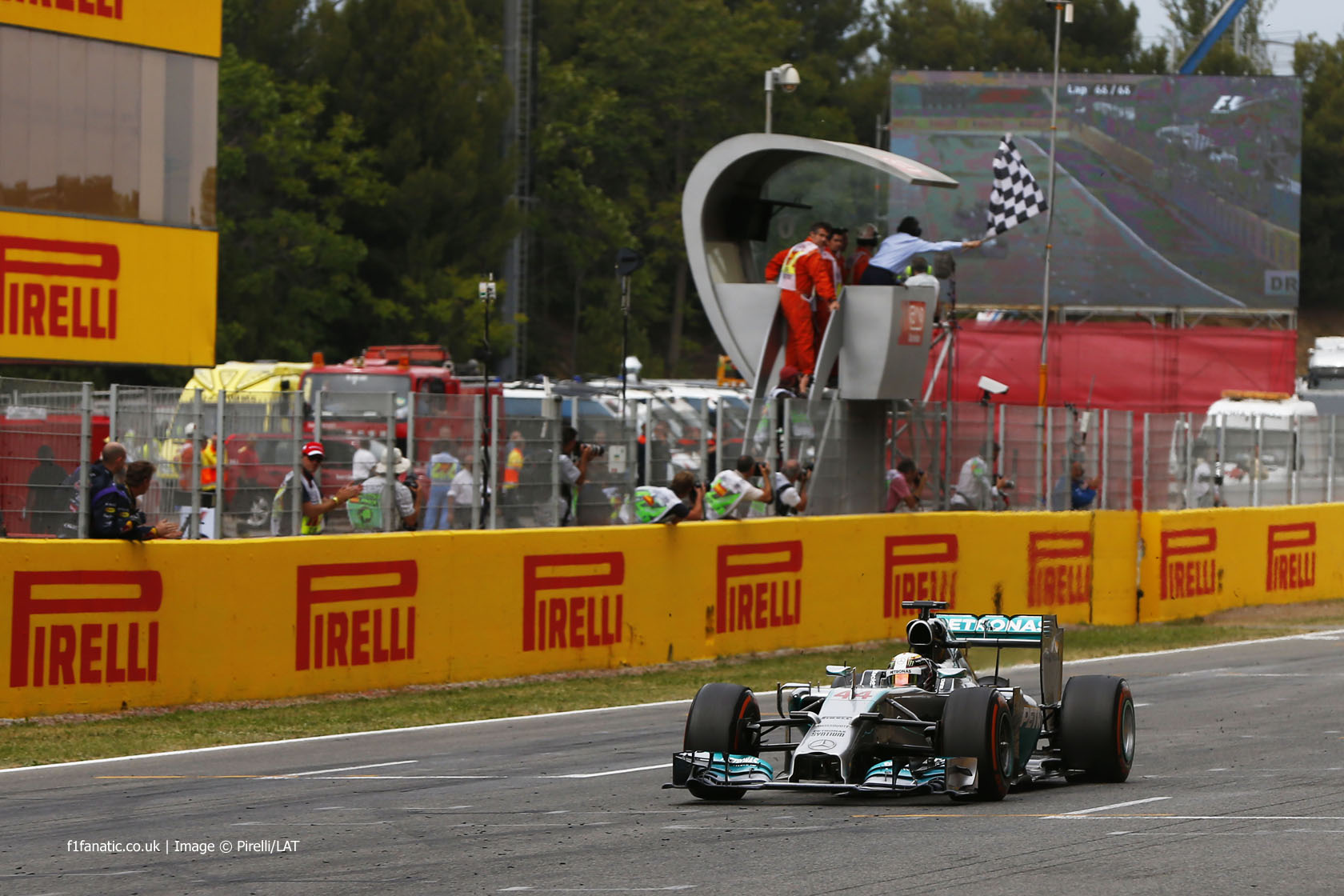 Lewis Hamilton took the lead of the drivers’ championship off his team mate in Spain – but Nico Rosberg didn’t give it up without a fight.

Rosberg came on strong in the final stint of the race and was within striking distance of Hamilton when the chequered flag fell at the Circuit de Catalunya.

It was a race which started slowly but came to life at the end, with Sebastian Vettel fighting his way up from 15th on the grid and the two Ferrari drivers doing battle in the closing laps.

Rosberg loses out at start With the Mercedes cars occupying the front row of the grid for the second time this year there was little chance of them doing anything other than motor off into the distance, and so they did. Hamilton left Rosberg behind on the run to turn one.

“The start unfortunately was poor,” Rosberg admitted afterwards. “It’s a bit of a weakness that we have at the moment, just inconsistent and now I’ve had a couple of bad starts in a row – actually three bad starts in the races.”

Rosberg’s start might have cost him a place to Daniel Ricciardo had the Red Bull driver not made an even worse getaway. That allowed Valtteri Bottas through into third, and he even made a token attempt to get around Rosberg at the first corner.

Romain Grosjean nearly followed him past the Red Bull, but locked his tyres up heavily at the first corner. The two Ferraris fell in behind him, Fernando Alonso backing off from an attempt to pass Kimi Raikkonen, who in turn thought better of attacking the Lotus at turn four.

The field almost completed the first lap without incident. But at turn 11 Pastor Maldonado, who had started from the back row after crashing in qualifying, threw his Lotus up the inside of Marcus Ericsson’s Caterham and made contact with him.

“His move risked putting both of us out of the race,” said an unhappy Ericsson afterwards, “but luckily the car was OK and I was able to continue”. The stewards handed Maldonado a stop-go penalty and another penalty point on his licence.

Meanwhile Kevin Magnussen was trying hard to stay out of trouble. He took to the run-off at turn 13 while scrapping with his team mate and returned to the track just as Sebastian Vettel was passing by.

The Red Bull driver left Magnussen little space as he swept by. Magnussen, who has damaged his front wing once too often in the early races, clambered across the turn 14 kerbs to avoid doing so again.

Hamilton quickly pulled out of range of attack from Rosberg’s DRS – by the end of lap three he was almost two seconds clear. But Rosberg was able to halt Hamilton’s progress when he needed to, and over the next dozen laps the gap between them changed little.

As in Bahrain, Mercedes felt comfortable that their pursuers were far enough behind that they could allow their drivers to race each other. As usual Hamilton, as the leading driver on track, had the first call on strategy and duly pitted first on lap 20 for another set of medium tyres.

Rosberg was momentarily confused about his team’s plan. “I thought they were going [hard] because they thought I had graining, but I didn’t have graining, so that’s why I was confused.”

“But then I understood: it was to offset my strategy so that I would have a chance to fight Lewis at the end so it was fine – and just what I wanted.”

Rosberg stayed out three laps longer before taking on a set of hard tyres. As the second stint began both Mercedes drivers were advised what gap they needed to their team mates by the end of the stint: Hamilton 5.5 seconds, Rosberg two. The pair played a game of cat-and-mouse as they swapped lap times and dodged through traffic throughout the stint.

All weekend long hot temperatures and a slippery track had created difficult track conditions for the drivers. Now overnight rain and overcast race day conditions had thrown the drivers another curve ball.

Hamilton was less happy with his medium tyres, complaining several times about oversteer during his second stint. As their final pit stops approached Rosberg reduce Hamilton’s lead to less than four seconds. The two Mercedes cars had pulled away from their pursuers as quickly as usual. By lap seven Bottas was 11 seconds behind.

As the lap began Ricciardo made an attempt to pass the Williams at turn one but had to pull out of it. He had been advised to drop back and protect his tyres, which he now did, biding his time until the pit stops. He made an early pit stop on lap 14 and Williams decided against pitting Bottas immediately to cover it.

Ricciardo was able to come in so early because a gap had appeared in the traffic behind him. That space was created by his team mate, who had pitted from 13th place two laps earlier.

A gearbox change penalty having left him 15th on the grid, Vettel hadn’t been able to gain any places off the line but had followed Daniil Kvyat and Jenson Button past the struggling Esteban Gutierrez. His early pit stop paid off handsomely, allowing him to jump Button and Kvyat plus both the Force Indias. But it meant he would have to make a third pit stop.

Grosjean pitted on the lap after Ricciardo, promoting Raikkonen to fourth and Alonso to fifth. But surprisingly it was the second of the two Ferraris which appeared in the pits first. And just as surprisingly Alonso didn’t take advantage of the undercut to get in front of his team mate – though he came close.

Alonso spent much of the following stint staring at his team mate’s rear wing. But he returned to the pits for his second visit eight laps before Raikkonen as Ferrari switched him to a three-stop strategy. It had started off as a processional race but in the closing stages several battles for position were developing. Vettel and Alonso made their third pit stops and went on the attack, and Rosberg was bearing down on Hamilton.

Vettel’s last pit stop moved him ahead of Alonso and within two laps he was bearing down on the other Ferrari. “Don’t waste time with Vettel because he’s too quick anyway,” instructed Raikkonen’s engineer Antonio Spagnolo, and he duly offered no resistance to the world champion.

He was less generous towards Alonso though, edging off-line at turn one as his team mate came within range on lap 63. Alonso had glimpsed a chink in Raikkonen’s armour, however, and using the benefit of his fresher tyres he claimed the inside line for four and took sixth place.

Vettel was long gone, however, and on the same lap he picked off Bottas for fourth to complete an impressive recovery to claim fourth place behind his team mate.

As the final lap began a silver blur appeared in Raikkonen’s mirrors. It wasn’t the lone Mercedes of Hamilton, it was both of them. Both had switched tyre compounds at their last pit stops and Rosberg used the new set of mediums he’d saved to close within a second of his team mate.

Hamilton repeatedly quizzed his engineer on the gap to Rosberg, where he was losing time and what he could to do resist Rosberg’s onslaught. As Rosberg said afterwards, if the race had lasted another lap he’d have been well-placed to launch an attack: little more than half a second separated them at the line.

Behind the lapped Raikkonen was his former team mate – Grosjean gave Lotus their first points of the year with eighth, having been passed by the Ferraris when his Renault power united developed a fault.

The two Force Indias completed the points scorers having run very long final stints. Sergio Perez passed Nico Hulkenberg after their final pit stops, as Hulkenberg was initially concerned he wouldn’t complete his 29-lap run to the chequered flag without another pit stop.

“This meant that rather than pulling away from them and having clean track, when they pitted they had the advantage. This happened again at the start of the second stint, so things just didn’t go my way.”

Kvyat also three-stopped and took 14th after passing Maldonado late in the race. The other Toro Rosso of Jean-Eric Vergne dropped out early on having started the race with an exhaust problem the team were aware of but couldn’t fix. Hamilton’s victory came on an important day for Mercedes as Daimler chairman Dieter Zetsche had appeared at the first European race to keep an eye on his team.

“Every time Dr Zetsche came last year we generally had a bad race,” said Hamilton, “so it was really important to get a good result for him to get rid of that negative bug, or bad luck that I guess he thought he was bringing.”

It’s taken four wins in a row for Hamilton to wrest the championship lead from his team mate, who after winning the opening race of the season has finished second to Hamilton in every race since.

But although he ended the race within striking distance of Hamilton, Rosberg believes it was decided much sooner than that. “The race was really lost in qualifying and at the start,” he said.

“Those were the two opportunities I had. Qualifying was very very close, I even had a bit of a problem which we found in hindsight, where I was a little bit down on power on the straight, but the difference was not enough to get pole, but still it was actually even closer than it looked.”

The championship now heads to the streets of Monaco, where Rosberg won last year. If he can’t stop his team mate’s victory streak there, his hopes of regaining the championship lead are going to look increasingly forlorn.