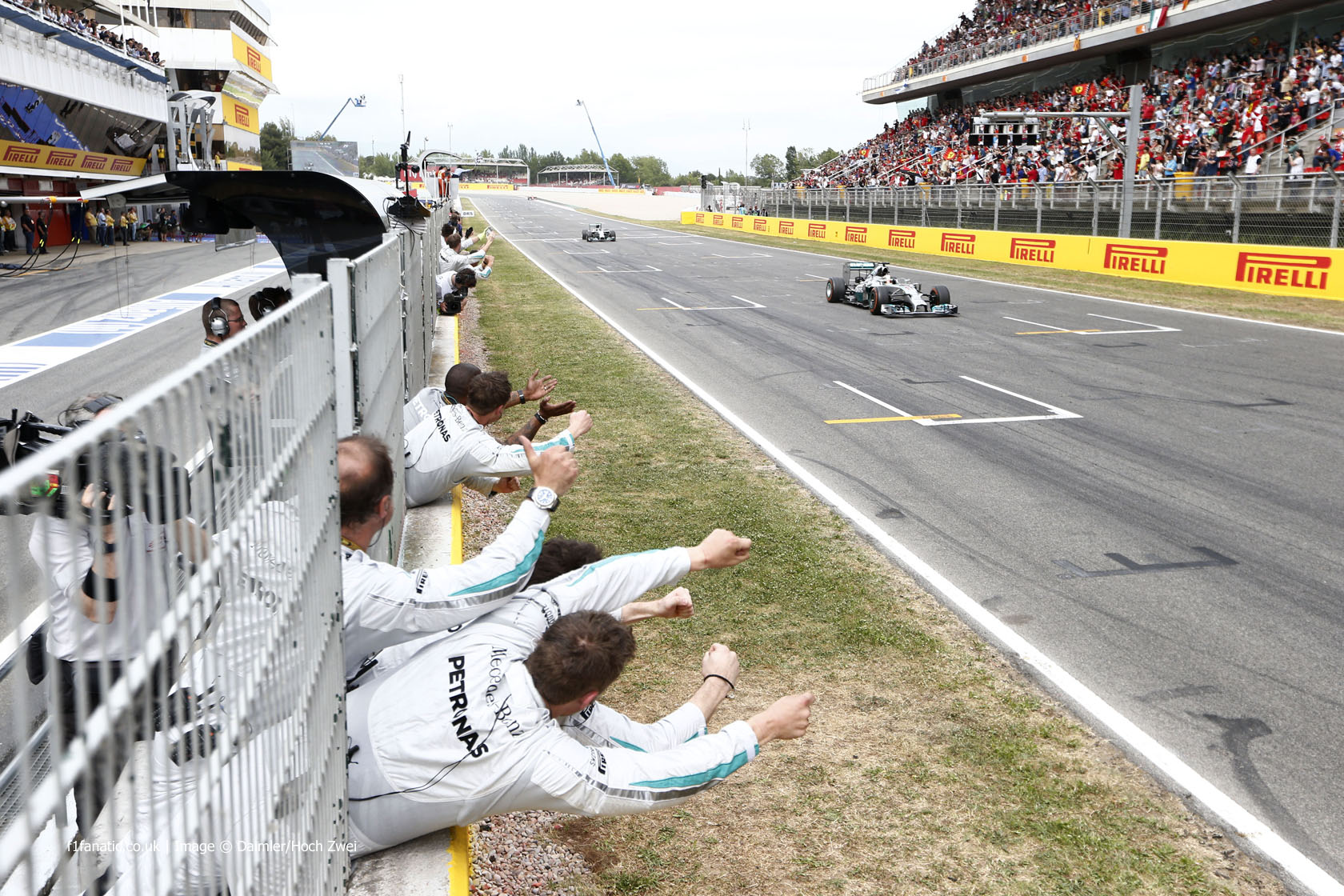 Victory in the Spanish Grand Prix meant Lewis Hamilton became the 13th driver to win four races in a row.

Three other drivers on the grid have also achieved that feat: Jenson Button, Fernando Alonso and Sebastian Vettel. The latter set the all-time record of nine consecutive wins at the end of last year.

Hamilton is now eighth on the all-time list of race winners after taking his 26th career victory. He needs one more win to reach Jackie Stewart’s tally of 27 wins, which stood as the record for 14 years between 1973 and 1987.

Hamilton also picked up his 35th pole position and now leads the drivers’ championship for the first time since the 2012 Canadian Grand Prix.

Vettel also needs one more win to complete a clean sweep. He is yet to win in Hungary, where Hamilton has racked up four wins. Here is how many time F1’s most prolific active winners (ten or more wins) have won each race, and Michael Schumacher’s record at each for reference.

However for the first time this year a Mercedes driver did not set fastest lap. Sebastian Vettel notched up his 23rd, putting him level with Juan Manuel Fangio and Nelson Piquet.

This was the first chink in Mercedes’ domination of a season in which they have still led every lap, taken every pole position and won every race.

But they did take their ninth one-two finish, giving them one more than Lotus. Four teams have achieved more, and Mercedes need another seven to catch up with Red Bull. It was their fourth in a row – the last team to manage more were Ferrari, who ended the 2002 season with five consecutive one-two finishes.

Mercedes are the first team to have led every lap of the first five races of a season since Williams with their FW14B in 1992. That streak same to an end in the sixth race for Williams, on lap 71 of the Monaco Grand Prix when Ayrton Senna took the lead as Nigel Mansell pitted with a suspected puncture, setting up a famous finish.

Only six drivers finished the race on the lead lap. The fewest seen last year was five, at the Canadian Grand Prix.

That means only three drivers in the field have completed every racing lap this year: Nico Rosberg, Fernando Alonso and Valtteri Bottas. Daniel Ricciardo finally scored his first official podium finish in F1, after having his Australian Grand Prix podium taken away from him due to a technical infringement. He is the 204th driver to score a top-three finish.

Aside from the Mercedes pair, no driver has scored more than one podium finish so far this year.

During that time only Vettel, Hamilton and Rosberg have claimed victories. Not since the 1988 season have only three different drivers done all the winning over a 12-month period.

Finally, Pastor Maldonado racked up the most penalties in 2011 and 2012, but last year he fell short of the top spot. He’s begun 2014 strongly, however, and after clattering into Marcus Ericsson on lap one in Spain he’s back on top again.

Browse all Stats and Facts articles