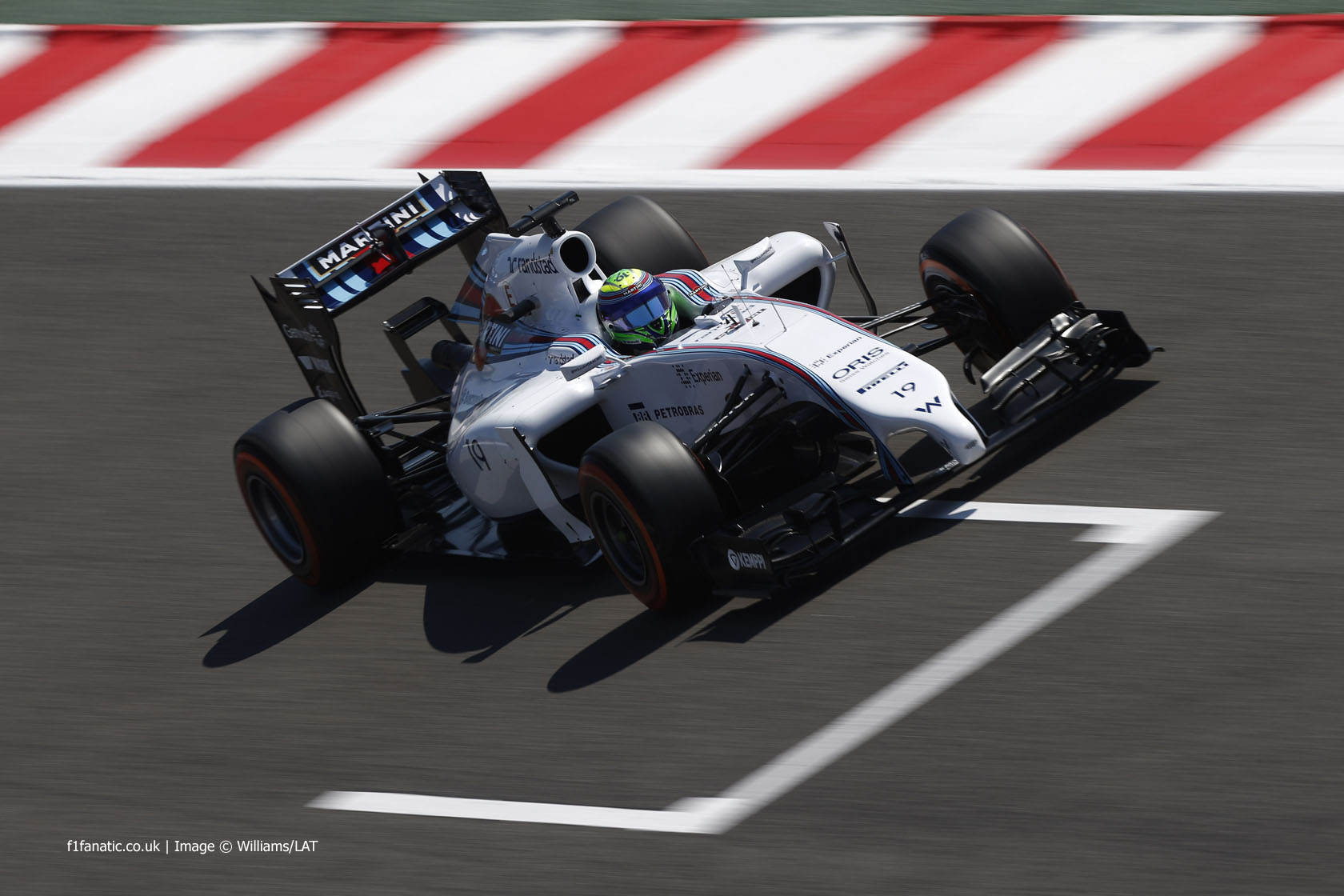 In the round-up: Rob Smedley says last week’s test at the Circuit de Catalunya helped restore Felipe Massa’s confidence in the Williams after a couple of difficult races.

“That just gives us all a great deal of confidence in our analysis methods and then going to test those methods in the track, it gives Felipe confidence that ‘I had a problem in the last two races, the guys have got stuck in and they’ve come out with a bunch of things, we’ve tested that all in Spain and it’s all worked’.”

Rob White: “We haven’t got anything in the engine that we think is insurmountable, in time, bearing in mind there are sporting restrictions and the real world development restrictions.”

The scores are in: How our athletes fare on Repucom’s DBI Index (SportsPro)

Lewis Hamilton is named as the world’s most marketable sportsperson ahead of Virat Kohli (cricket) and Robert Griffin III (American football).

“‘I could have a race at Long Beach this afternoon if I wanted,’ says Mr Ecclestone though he suggests that this isn’t a top priority as F1 ‘left there 30 years ago.'”

“He provided me with endless support and advice over the years and became a close confidante – even right up until the last couple of years when, after hearing the rumours that I might move to Ferrari, he told me he would be very disappointed if I went there because for him, it was the absolute betrayal because they were his motivation – the ones he wanted to beat in his day!”

Jackie Stewart: “Jack was a master of his art. Combining a fine brain with great experience, he would only have to drive a car around one or two corners to decipher what component area was preventing him from making the car do what he wanted.”

F1 champion Brabham ‘one of the greats’ (The Telegraph)

Alan Jones: “I think Jack’s achievements to win a Grand Prix in a car that he actually designed and built and engineered is an enormous achievement.”

‘A true racer of the old school’ (ESPN)

“He knew how to play the game. ‘Crafty’ doesn’t make a start. The change of engine formula for the 1966 F1 season sums up his attitude perfectly.”

“What did happen in Albert Park is that a few drunken fans shouted abuse at Ron Walker and threw their earplugs at his car one evening when he was leaving. This seems to have made an impression on sensitive old Ron.”

So taken aback by all the amazing tributes to my father. So nice to see so many people pour out their memories and emotions. #thankseveryone

Today we lost not just my grandad but a legend of our sport and someone I looked up to a lot, he is in a better place now. R.I.P grandad

Thanks so so much for everyone's condolences! Really means a lot to my family and we are grateful for… http://t.co/i7u9PNvlNG

Sorry to hear about Sir Jack Brabham. A great Australian who inspired many Aussies to pursue our dreams.

RIP Sir Jack Brabham. It was a privilege to get his trenchant comments for my book on the 1957 Pescara Grand Prix (he detested it).

Always amazed me that some engineers took 24h to make setup decisions here after FP2, that they'd normally have to make in 3h on a Fri eve.

My boots for the final !! And the best wishes to Michael. #keeponfighting #schumi #GunningForTheCup #poldi #wembley pic.twitter.com/oBmeOW1nq7

There were many fine tributes to the late Sir Jack Brabham yesterday, here’s

As an Aussie I can say its a sad day, not only for motorsport but for Australia. Jack Brabham was in the same class as our other sporting icons such as Sir Donald Bradman (cricket) and Dawn Fraser (swimming). I’m not sure if he realised just how much us Aussies are proud of his achievements on the world stage.

The only driver to win the world championship in a car of his own design and manufacture, the Repco V8-powered Brabham BT19 in 1966. A feat yet to be repeated and its highly unlikely if anyone will ever do that again.

I remember seeing Sir Jack at the Historic Sandown meeting in late 2009, though unfortunately I didn’t get to meet him as his health wasn’t the best. It was about 38 degrees that day and the heat was really affecting him, though he did tough it out to watch his grandson (Geoff’s son Matthew) go round in a Formula Ford.

Nigel Mansell finished on the podium for Lotus, grieving for his mother who had died of cancer before the weekend began.