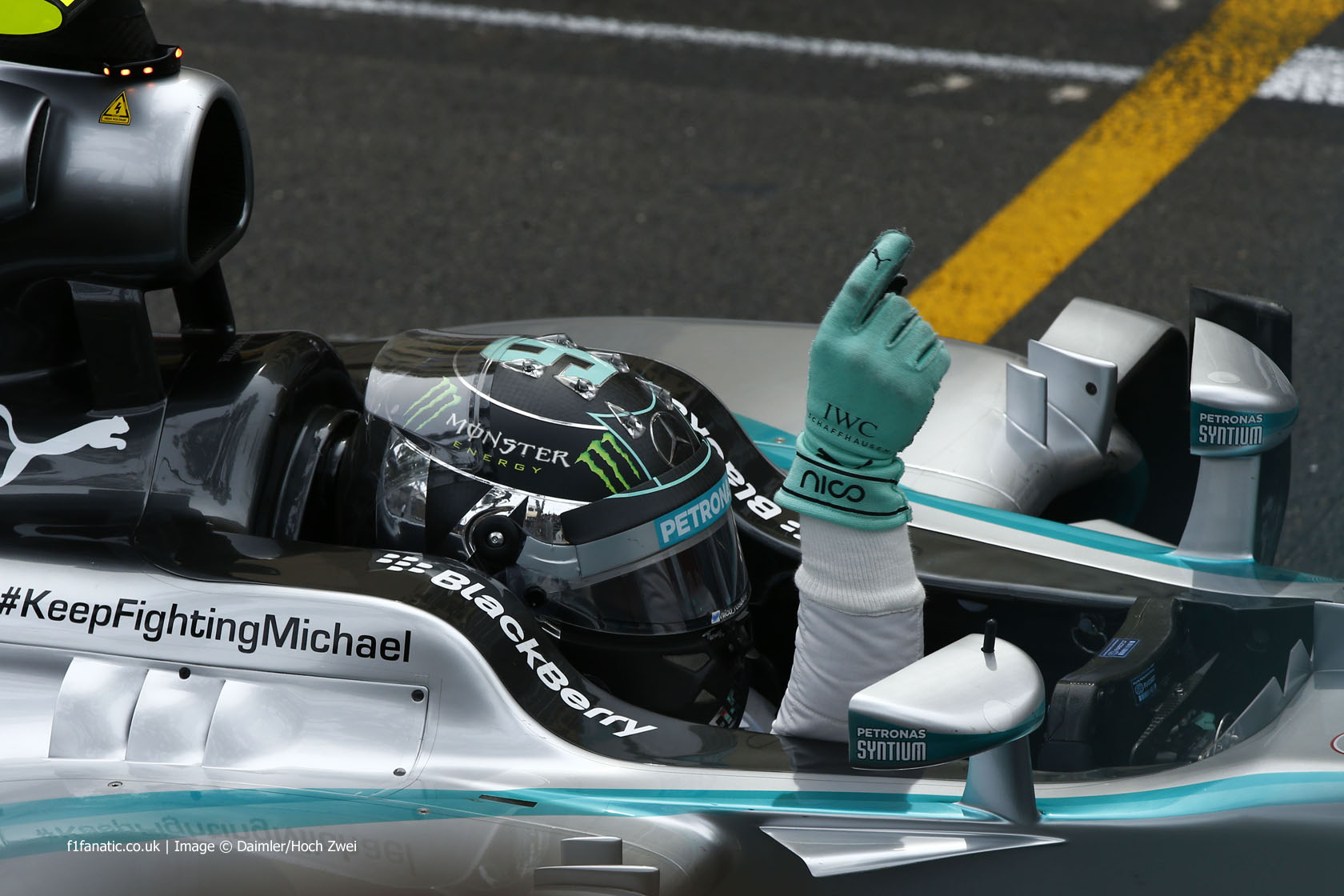 Nico Rosberg took full advantage of the benefit of starting from pole position to repeat his Monaco Grand Prix win of last year.

He held team mate Lewis Hamilton at arm’s length for much of the race, until Hamilton dropped back in the closing stages when his vision became impaired.

But while Rosberg claimed a badly needed victory in the ongoing battle of the Mercedes drivers, Marussia finally scored their long overdue first points score. Over four years since the team first entered F1 as Virgin, Jules Bianchi was classified ninth on the Monte-Carlo streets. The 78-lap race only realistically offered Hamilton two opportunities to pass his team mate. The first passed him by within seconds of the lights changing, as Rosberg made one of his best starts of the season so far to hold onto the advantage he had won in controversial circumstances on Saturday.

The second came 25 laps into the race, when Adrian Sutil’s Sauber skewered the barrier on the approach to the chicane and skidded to a halt. Hamilton considered diving for the pits immediately, before the Safety Car was deployed, but decided not to – something he quickly came to regret.

The Safety Car was summoned on the very next lap, and Hamilton had to take his pit stop immediately after Rosberg. Any chance of getting a precious lap of clear air to try to under- or over-cut his team mate was lost.

“I can’t believe that we just had to pit,” said a dejected Hamilton on the radio. Then he added: “We should have pitted on that lap, I knew I should have.”

Hamilton may well spend the days between now and the Canadian Grand Prix reflecting that had he announced his intention to pit, Rosberg would have been faced with the dilemma of whether or not to respond. Whichever course of action Rosberg had taken, Hamilton would have had the opportunity to do the opposite, and earn himself at least one lap in clear air to try to make the difference.

Hamilton’s fate was sealed by that Safety Car period, and even when he closed on Rosberg later in the race when his team mate had to save fuel, the chance of him putting a pass on an identical car in Monaco of all places seemed remote. Not for the first time this year an absorbing race had developed behind the duelling Mercedes drivers.

A poor start from third on the grid saw Daniel Ricciardo slip to fifth behind Sebastian Vettel and Kimi Raikkonen. But he soon took one of those places back, as Vettel lost his turbo boost just a few laps into the race.

It was the latest in a series of technical setbacks for the world champion this year, and all the more frustrating for occurring at a circuit where Red Bull expected to be closer to Mercedes. His unhappiness was made plain as he urged his team to find a solution, then headed to the pits and into retirement.

Vettel’s turbo problem manifested itself moments after the race resumed following a first-lap collision which eliminated Sergio Perez. The Force India driver had been knocked into the barrier by former McLaren team mate Jenson Button.

Ricciardo moved up to fourth courtesy of his team mate’s demise, and was destined to inherit third when misfortune struck Raikkonen. Misfortune in the shape of Max Chilton’s Marussia, who ran into him during the second Safety Car period, forcing Raikkonen to make an extra pit stop which ruined his race. When the race got going again Raikkonen was 13th, chasing Kamui Kobayashi while Bianchi stalked the pair of them. Following an unsuccessful attempt to pass at the chicane, Raikkonen eventually demoted the Caterham at the run to Rascasse on 40.

Bianchi opportunistically sprung to take advantage, squeezing into a gap between Kobayashi and the inside of the corner which was only a few millimetres wider than a Marussia.

That move paid off doubly when Jean-Eric Vergne emerged from the pits just behind the Marussia, having served a drive-through penalty for being waved out in the path of Kevin Magnussen during the second Safety Car period.

Bianchi had also had a brush with the stewards, picking up a five-second penalty for starting out of his grid position, as did his team mate and Esteban Gutierrez. Marussia attempted to serve it during his first visit to the pits, but the new penalties cannot be served under the Safety Car, so he was issued another one which added five seconds to his final race time.

But by now he was closing on the points places, and several key rivals were dropping out quickly. It began with Vergne on lap 52, who had nudged the Marussia at the Fairmont Hotel hairpin, then suffered another exhaust failure.

A power unit failure claimed Valtteri Bottas on the 57th lap, and four laps later Gutierrez clipped the barrier at Rascasse and spun out of the race with a damaged wheel.

Bianchi’s next gift began when Magnussen experienced a loss of power. Team mate Button passed him at Sainte Devote, then Raikkonen dived down the inside of the McLaren at the Fairmont Hotel hairpin – but couldn’t stop his Ferrari. The two stopped on the outside of the bend, and Bianchi motored by to pick up eighth place. By now a late drama had ended Hamilton’s hopes of passing Rosberg and put his second place in jeopardy. A dozen laps from home he reported to his team: “I can’t see out of my left eye, I’ve got some kind of debris in my eye.”

Understandably Hamilton’s lap times began to suffer. He later said the grit cleared up but not before Ricciardo got on his tail – despite telling his team with eight laps to go he didn’t care how close the Red Bull driver was getting.

Ricciardo fell short at the flag, leaving Mercedes to claim their fifth one-two in a row. Alonso took fourth ahead of Hulkenberg, who had run a long stint on the super-soft tyres which began with an extraordinary pass on Magnussen at Portier.

Button took sixth ahead of Massa, who postponed his first pit stop until lap 46. Bianchi’s eighth on the road became ninth after his penalty was applied, promoting Romain Grosjean. Magnussen rounded off the points-scorers after his late problem.

Having been in the hunt for a podium finish early in the race Raikkonen finished out of the points, and a disappointing day was capped by a reprimand for his collision with Magnussen. Chilton, 14th, received the same for hitting Raikkonen.

For Marussia the scenes of joy were unbridled – their long-awaited first points score a fitting rewarded for F1’s smallest team at a time when the financial challenges facing them has never been more apparent.

And while Mercedes outwardly had no reason to be displeased after taking their fifth one-two finish in a row, Monaco was the clearest sign yet that the simmering tension between their drivers is threatening to boil over.