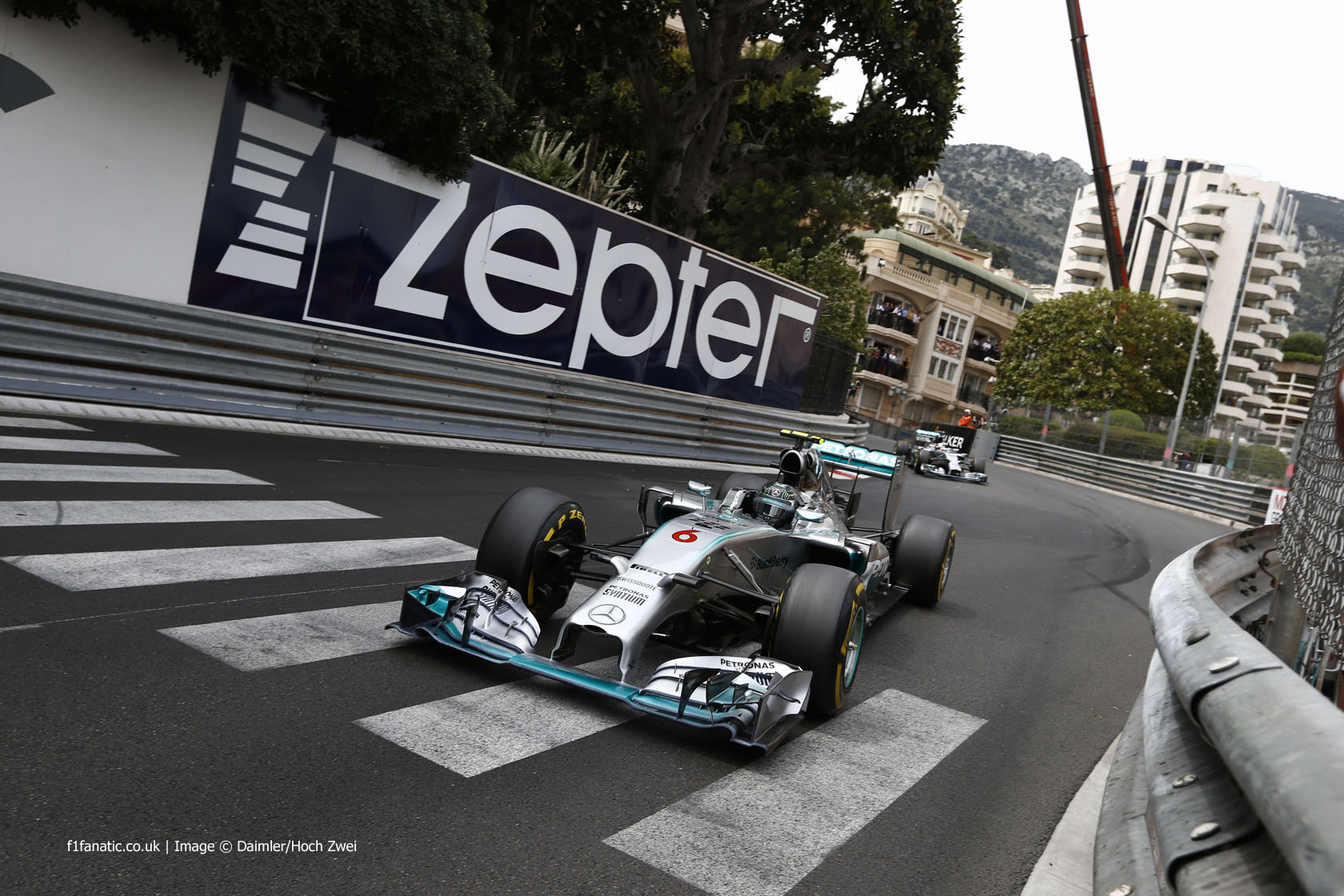 In the round-up: Lewis Hamilton raises suspicions over Nico Rosberg’s driving at Mirabeau when he went off the track during qualifying at Monaco.

“I wish you could have seen the data. I saw something late on last night and all I could do was smile.”

Toto Wolff on Hamilton and Rosberg using powerful engine settings when they are not permitted to: “It’s never going to happen again. I think they are probably exploring how far you can step above the line and what the consequences are. But isn’t that normal?”

“They are knocking on the door, but I don’t think we can do that.”

Alonso sure Bianchi has a great career ahead of him (Reuters)

“Hopefully with this result he can have a more competitive car next year and show his talent even more.”

“Despite their dominance, Mercedes keep developing their car in the hope of keeping their advantage for as long as possible.”

Where has the glamour gone? (James Moy)

“There is another type of Monaco Chav. The ones that sit on their boats, hugely overweight, surrounded by pretty Russian hookers whilst blasting out RnB at full volume. The ‘nouveau riche’ Chav.”

@LewisHamilton refused to go in to detail but says the evidence of Monaco wrongdoing is there for all to see on tv. I am damn curious #f1

Happy to have been chosen to give the start the 24h lemans, one of races that has defined the history of motor sport. pic.twitter.com/vyNDQLPS7z

@danielt_johnson Just doing our job and nothing against @Marussia_F1Team. Been covering the accounts of all teams for a decade.

The highlight for me was Bianchi and Marussia scoring their first points, it is something I didn’t expect to see this year. Those points are so valuable to them, it is easy to forget how smaller they are than other teams (even Caterham), not only is it a morale booster for the team it also brings them valuable FOM points.

I am a big Marussia fan so seeing them celebrate like they won the race was so special it almost brought a tear to the eye. It was not a points scoring occasion like in the past where a Jordan or perhaps a Minardi would only get in the points because of the high attrition rate that used to happen during races in the past. They did a better job on the weekend than the other teams, Marussia have built a reliable car, obviously got the strategy right on race day, Bianchi did everything he could dragging that car into the points, a brilliant overtake on Kobayashi all culminated in a fantastic weekend for them.
Lucas Wilson (@Full-Throttle-F1)

Ferrari, Sauber, Tyrrell, Minardi and Larrousse were the only teams to participate in the first practice session for the Spanish Grand Prix, held 20 years ago today. The remaining nine teams sat it out while they confronted the FIA over its plan to introduce drastic changes to the cars on safety grounds.

Once they did return to the track disaster struck again. Andrea Montermini, who had taken Roland Ratzenberger’s place at Simtek, crashed at the final corner. Fortunately his injuries were not serious.