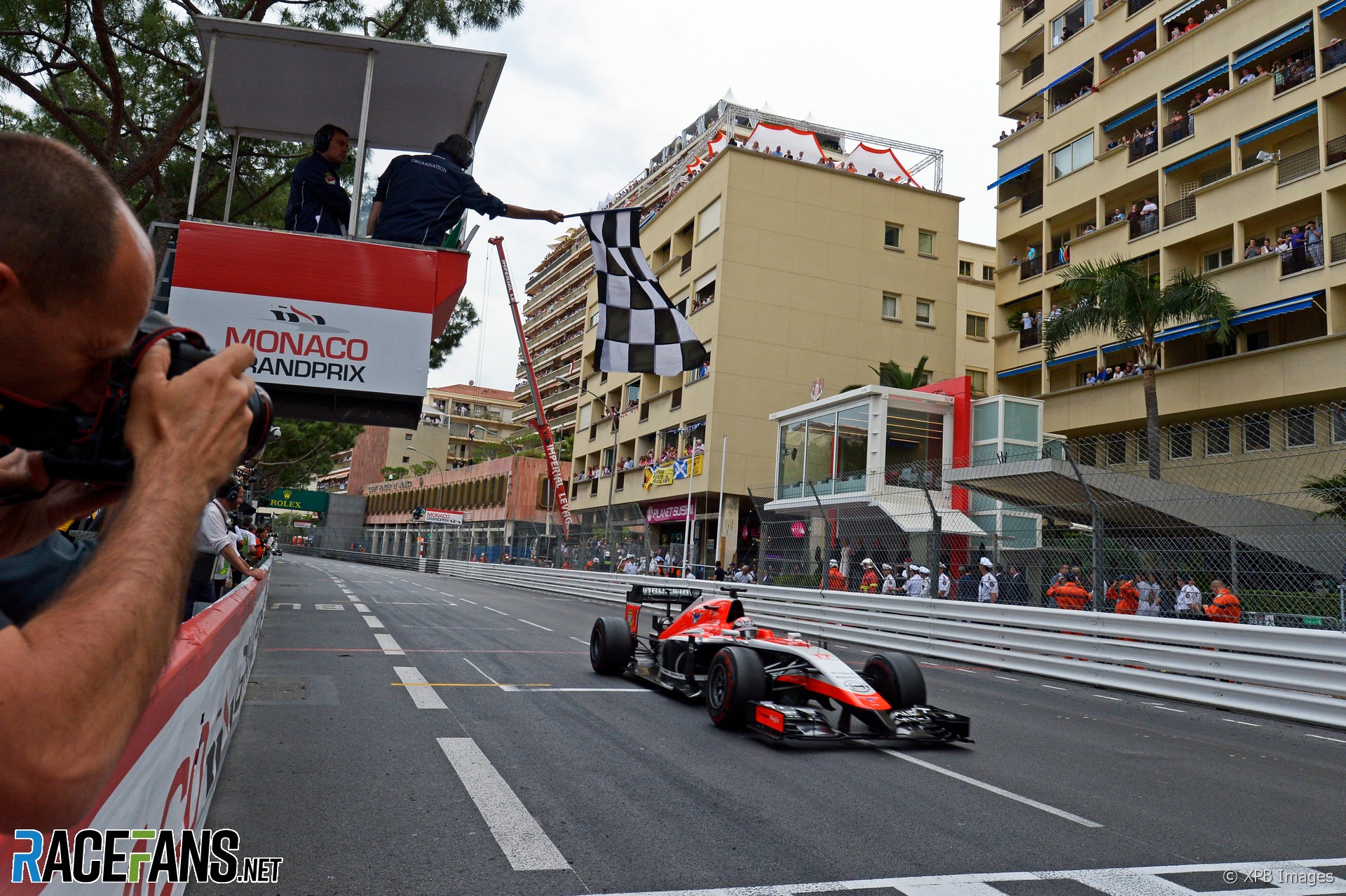 Jules Bianchi climbed thirteen places to finish eighth on the road in the Monaco Grand Prix.

And although a post-race time penalty dropped him to ninth he still scored Marussia’s first points – and was duly voted F1 Fanatic readers’ Driver of the Weekend. Bianchi claimed the highest percentage of any driver so far this year, taking 60.2% of the vote.

Race winner Nico Rosberg was second in the voting with 11.5%, and Daniel Ricciardo placed in the top three for the fourth time this year.

Jules Bianchi’s weekend was looking impressive from opening practice, where he managed to slot himself into 13th after the opening half an hour of running. He continued to push and ended qualifying half a second clear of team mate Max Chilton and just six tenths slower than the Sauber pair.

A gearbox change penalty demoted him to the back row, but a strong start undid some of the damage. However that was partly due to the fact he and several other drivers had started too far forward (Pastor Maldonado having failed to take the start), and was handed a five-second time penalty.

Bianchi served his penalty under the Safety Car and afterwards he kept his nose clean as he fought his way back through the field, which included elbowing Kamui Kobayashi aside at Rascasse.

As rivals ahead dropped out Bianchi found himself in tenth, but was then handed another five-second penalty for taking the first one under the Safety Car. With no more stops to make the penalty was added to his race time at the end.

Romain Grosjean was closing fast and it looked as though Bianchi was going to miss out. But in the closing stages Kimi Raikkonen and Kevin Magnussen tangled, promoting Bianchi to eighth. He kept calm and brought the car home eighth on the road – ninth after his penalty – to secure his and Marussia’s first ever points.

Has to be Bianchi. He was mixing with the Saubers and the Lotuses in free practice, battered Chilton in qualifying, and produced the race of his life to finish in ninth. The overtake on Kobayashi will be controversial but it was still a top move.
@Craig-o

Bianchi; scoring points in a Marussia, in a dry Monaco race with three penalties and 14 finishers.
Nick (@Npf1)

Jules Bianchi is the only driver deserving ten out of ten last weekend.

Even though he made a fault starting in the wrong grid position – and admitted he could have make Q2 – Bianchi was faultless when the action really started.
JayfreeseKnight (@jeff1s)

Despite having failed to finish outside of the top two in any race this season, and having won twice, Monaco marks the first time Nico Rosberg has appeared in top three of the Driver of the Weekend vote all year.

He did it under somewhat of a grey cloud however, following his controversial moment at Mirabeau during qualifying that ultimately helped him to pole. It divided opinions in the paddock – and here on F1 Fanatic – as to whether it was intentional or not.

Rosberg had been working on his starts in the build-up to Monaco – having lost out to team mate Lewis Hamilton in Bahrain last time he’d beaten him to pole – and it paid off, with a clean getaway meaning he held the lead into turn one. From there Rosberg held track position and in identical cars he matched whatever Hamilton threw at him.

After some consideration I gave it to Rosberg. While Bianchi helped Marussia to their first ever points, a lot of variables fell into place. Not taking away anything from Bianchi or Marussia’s progress, Rosberg gets it for withstanding immense pressure from Hamilton throughout the weekend.
Sankalp Sharma (@Sankalp88)

I picked Rosberg because I believe him and the stewards that he did nothing wrong, and even though he did make a mistake I think the pressure is so much bigger for him than, for example, Bianchi. And the fact that Rosberg drove a flawless race, again, with big pressure and Hamilton always right behind him, sealed it for me.

I was quite concerned for Rosberg’s start, but he nailed it at exactly the time and race he needed to.
@Robbie

Daniel Ricciardo looked ‘best of the rest’ all weekend and even showed hints of challenging the Mercedes duo in qualifying, but ultimately fell short with a lap that left him far from impressed, despite putting him third.

With overtaking being difficult in Monaco another podium looked a near certainty but Ricciardo nearly threw it all away with a torrid start, falling behind team mate Sebastian Vettel and the fast starting Raikkonen. As they suffered problems however Ricciardo ploughed on, and even challenged Hamilton’s Mercedes for second late in the race following the latter’s eye problems.

My vote goes to Ricciardo. Absolutely rock-steady consistency in both qualifying and race-pace once again. First time this year we’ve seen any team place any real pressure on a Mercedes as well. Kudos.
Philip Osmulski (@Philprojectd)