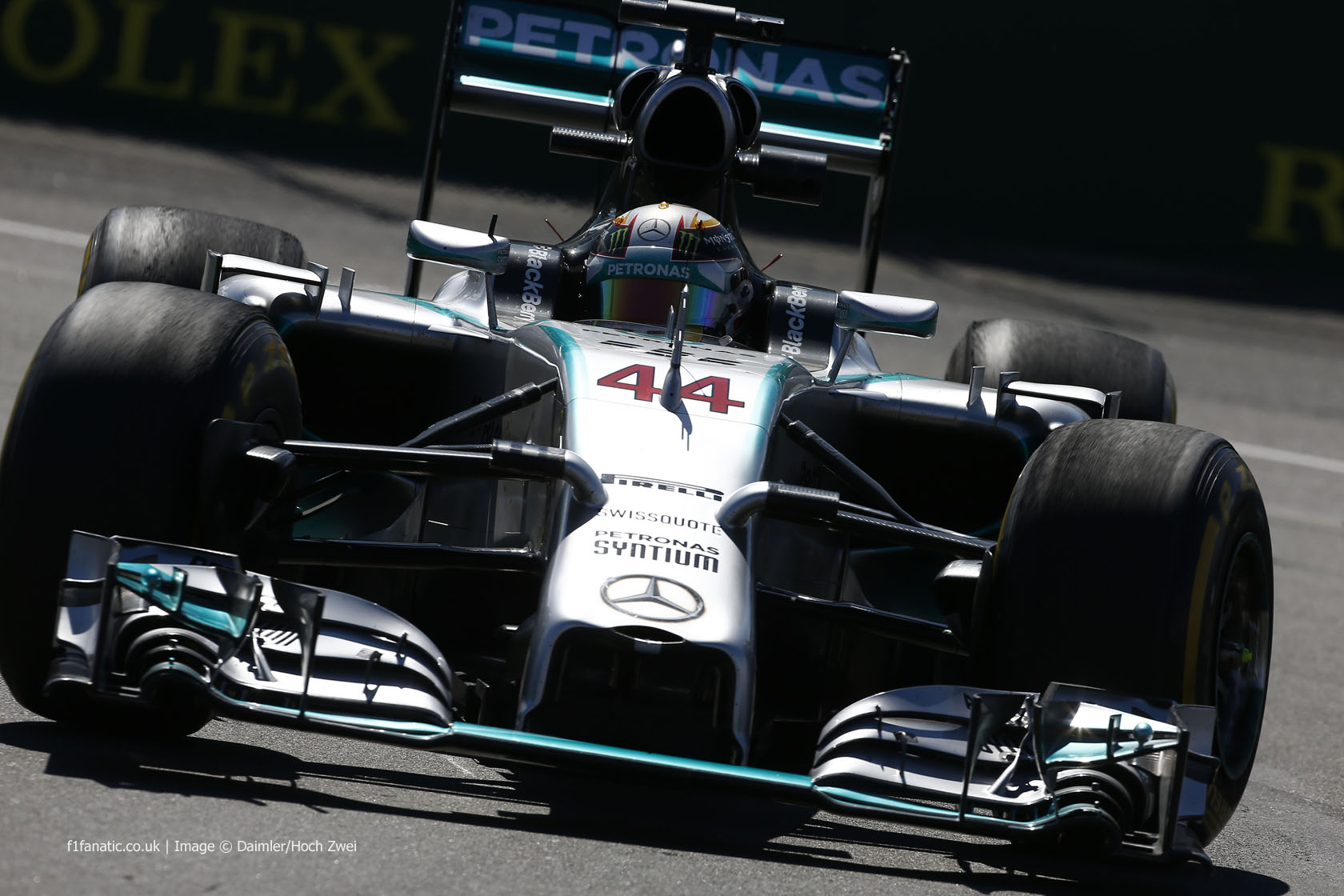 The Mercedes pair are the only drivers to have lapped the Circuit Gilles Villeneuve in less than 75 seconds this weekend, and look like having the race to themselves on Sunday.

But that’s no bad thing as we’ve seen more than once already this year. And behind them we look set for an equally absorbing battle between Red Bull and Williams, whose four drivers were covered by a mere 0.041s in qualifying.

The run from pole position to the turn one left-hander at the Circuit Gilles Villeneuve measure little more than a quarter of a kilometre. So it tends not to see many exchanges of position at the start of a race.

“It is hard to overtake at the start here because there is not enough room through the first two corners,” explained Fernando Alonso. Turn one quickly leads into the turn two right-hander, and while passes here on lap one are uncommon, collisions between rivals are not.

Lewis Hamilton has beaten Nico Rosberg to turn one from second on the grid once already this year, in Bahrain. But it will be an especially tall order this weekend, particularly if Rosberg gets away as well as he did in Monaco.

The cars to keep an eye on for fast starts this year are the Williams duo, who line up fourth and fifth. Felipe Massa has gained a total of 12 places on lap one over the six races so far and Valtteri Bottas has made up eight.

So third-placed Sebastian Vettel can expect to feel the heat from them at the start. Daniel Ricciardo, who lines up sixth on the grid, needs to get away much better than he did in Monaco, where he lost two positions in a very short space of time. If he can’t get past at the start Hamilton may not need the benefit of an alternative strategy to make a move on Rosberg. As we saw last year, Canada’s single DRS detection point and two activation zones can make it very easy for drivers to pass in the right circumstances – to the extent that some drivers were even slowing down before the DRS line to try to gain the benefit.

It’s not beyond the realm of possibility we could end up seeing a ‘slipstreamer’ type of race, where the pair swap positions in successive laps. That would create some interesting discussions on the pit wall, for as we saw in Bahrain the driver who is ahead gets first call on pit strategy.

Tyre tactics are going to be strongly influenced by hot weather conditions, more of which are expected tomorrow. “It’s going to be hard to read the tyres’ behaviour in these very hot conditions,” said Jenson Button.

“They’re very easy to grain, so if you can look after them throughout a stint, it could make a big difference in the race.”

With all the top ten runners starting the race on the super-soft tyres they used in Q2, the first question will be how long can they make them last – and can they then stretch their stints long enough to run a one-stop strategy. Pirelli suspect some drivers will prefer to make two.

But the the harder soft tyre likely to perform better in the race, those starting outside the top ten have a strong incentive to start the race on it. That could play into the hands of Nico Hulkenberg.

“P11 is a good starting position,” said the Force India driver, “it gives us some flexibility in terms of the strategy – I get to choose my starting tyres and I’m feeling quite optimistic about our race pace.”

While the two Mercedes drivers enter round four of their fight for supremacy in identical cars, the differences between the cars immediately behind them will create a different kind of battle.

Red Bull have their usual top speed weakness, but the Williams cars are faster than almost anything else in a straight line. That should add up to another exciting contest.

Which of the Mercedes drivers will come out on top this time? And who will claim ‘best of the rest’ honours?

25 comments on “Mercedes vs Mercedes, Williams vs Red Bull in Canada”