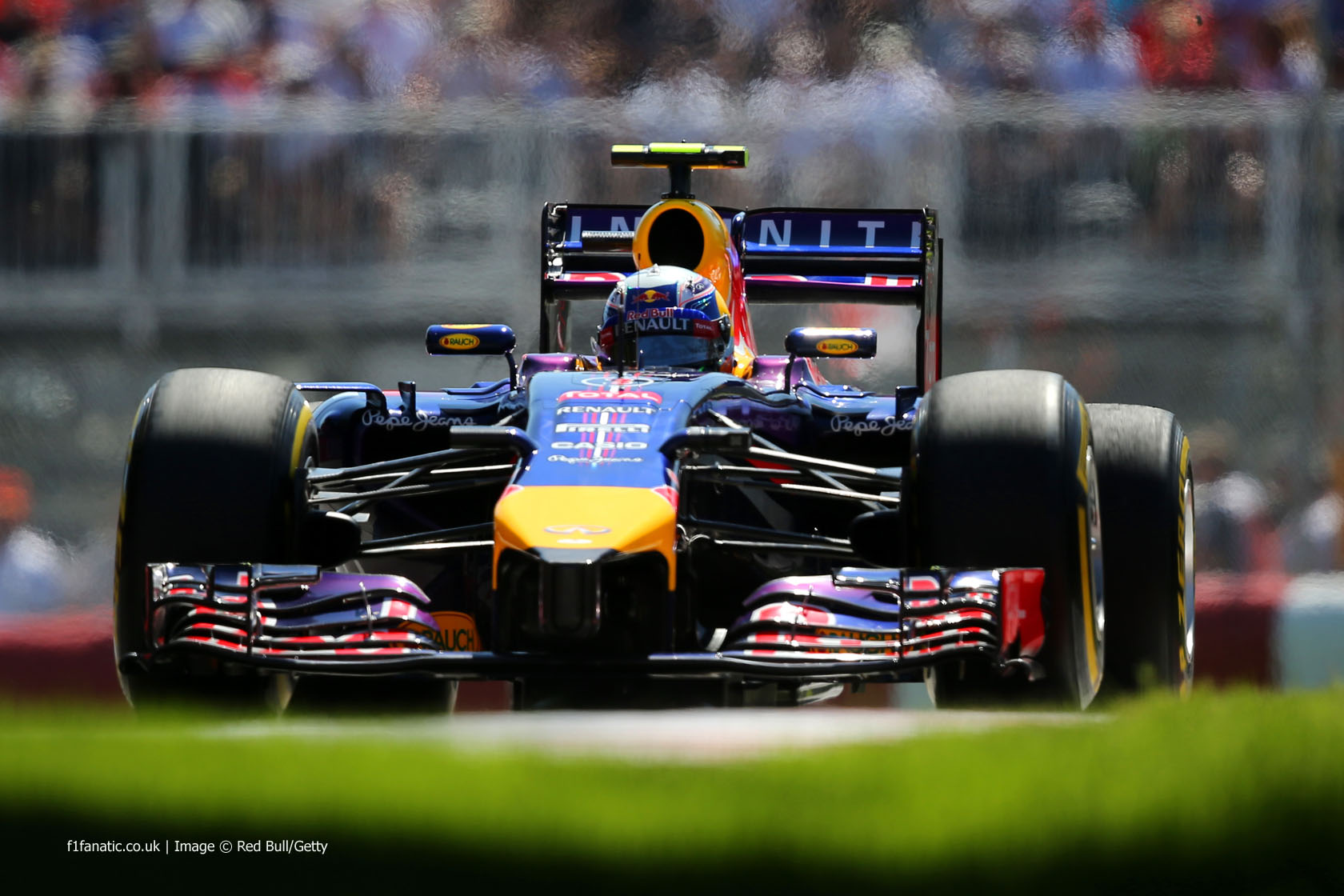 Australia’s Daniel Ricciardo has claimed his first grand prix victory after a chaotic and thrilling Canadian Grand Prix in which Lewis Hamilton was forced to retire with brake issues.

Nico Rosberg finished second after Mercedes were struck by a mysterious problem that slowed both cars. Sebastian Vettel finished third.

At the start, Hamilton appeared to get the better start of the two Mercedes drivers, but was pushed out wide by Rosberg at the apex, forcing Hamilton to tuck in behind Vettel into third.

Then, chaos ensued into Turn Four when Max Chilton lost control of his Marussia and collected team mate Jules Bianchi, sending the Frenchmen into the wall and eliminating both cars on the spot.

After a long period behind the Safety Car, the race eventually resumed on Lap 8 with Rosberg able to make a clean jump on Vettel behind. Hamilton took immidiate advantage of DRS being activate on Lap 10 to breeze past the Red Bull on the long back straight while Daniil Kvyat spun at Turn Two, dropping him to last on the track.

Daniel Ricciardo was the first of the front runners to pit on Lap 14, with Bottas, Vettel and Massa following suit in the following laps. A long stop for Massa with a sticking left-front tyres dropped the Williams driver behind Alonso and Vergne.

Rosberg pitted first of the Mercedes drivers from the lead on Lap 18 after almost throwing the car into the wall at Turn Four on his in lap. Hamilton pitted the following lap, rejoining with around a two second gap to his team mate. The Force India pair of Sergio Perez and Nico Hulkenberg inherited third and fourth respectively having stayed out.

Hamilton began chipping away at the gap to Rosberg, closing to less than a second behind the leader. On Lap 25, with Hamilton in DRS range, Rosberg locked up on the approach into the final chicane and ran through the tarmac run-off on the inside of the corner, holding on to the lead in the process. Despite Hamilton not actively attempted to pass his team mate, Rosberg was investigated by the stewards for exceeding track limits and later received a final warning but no penalty.

After half a race distance on a single set of Supersoft tyres, Perez eventually pitted from third, rejoining in 9th. Hulkenberg stayed out, maintaining his third position. Both Red Bull drivers pitted, with Ricciardo successfully leapfrogging his team mate.

Suddenly, there was drama as both Mercedes drivers reported a loss of power. Instantly, the leading Mercedes dropped over two seconds over their previous pace. Frantic radio calls suggested that both cars may have been suffering a energy recovery issue.

Both Mercedes pitted for a second time, handing Felipe Massa the lead of the race, but, more crucially, Hamilton was able to get out ahead of Rosberg. But then, Hamilton suddenly ran wide at the hairpin and Rosberg was through. Hamilton immediately tucked back in behind his team mates slipstream, but ran straight through the final chicane.

Hamilton was forced to allow Rosberg back through, but after missing yet another corner, this time at Turn Five, it was obvious that Hamilton was suffering a severe braking issue. Inevitably, Hamilton was pulled into the pits and forced to retire for only the second time this season.

With Hamilton out, Massa pitted and Rosberg regained the lead but was quickly under pressure for Perez with the two Red Bulls immediately behind. Despite an obvious mechanical issue, Rosberg was still quick enough to hold off the chasing pack behind him, but entirely unable to pull away.

There was a similarly tight battle for fifth with Nico Hulkenberg, Bottas, Massa and Alonso line astern. With Massa on fresher tyres, the team informed Bottas to let his team mate through, which he achieved by running wide at the hairpin. Massa then passed Hulkenberg soon after.

With Massa released, he was able to catch the leading pack ahead. With five laps remaining, Rosberg, Perez, Ricciardo, Vettel and Massa were all together on the race track. Then, Perez was heard complaining of braking issues and Ricciardo was able to dive down the outside of the Force India into Turn 1 and take second place. Vettel then passed Perez himself soon after.

Ricciardo then chased down Rosberg and with just over two laps remaining was able to pass the Mercedes into the final chicane to take an unlikely lead. At the start of the final lap, Massa attempted to pass Perez but the two collided, sending both crashing into the wall and out of the race in a violent accident.