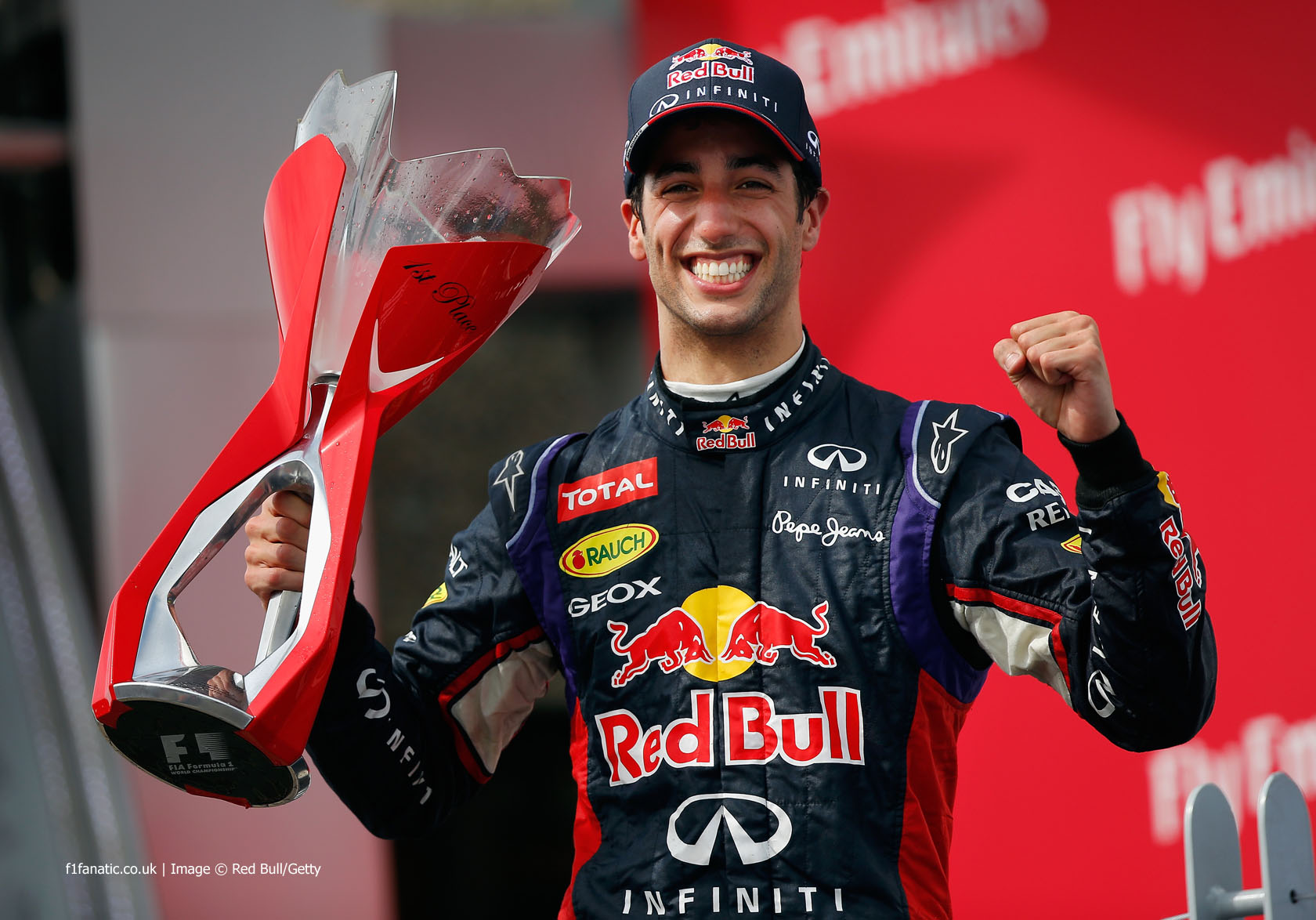 Mercedes’ crushing start to the 2014 season had to end eventually. But few could have expected it to be so soon, or to happen at a venue which so obviously played to their strengths.

But after both their cars were struck by the same glitch halfway through the Canadian Grand Prix, it seemed at first as though no one was going to take advantage of the rare opportunity to beat the W05s.

In the end it was the driver who’s been one of the stand-out performers of the season so far, Daniel Ricciardo, who pulled off a stunning maiden grand prix triumph. The first half of the race followed the usual 2014 script. The contest at the front was an all-Mercedes affair, and following the tense events of Monaco there seemed to be a bit more needle between the two of them.

That was certainly the case at the start, when Lewis Hamilton got away more cleanly from second on the grid and reached turn one before Nico Rosberg. But pole position is on the inside line for a reason, and Rosberg used that advantage to edge Hamilton wide and off the track, allowing Sebastian Vettel up into second place.

Hamilton was deprived of the chance to hit back immediately as the Safety Car was summoned following a first-lap crash. Max Chilton had blundered into his team mate at turn three, and any hopes Marussia had of repeating their giant-killing feat from Monaco was wrecked along with both their cars.

It took seven laps to get the mess cleaned up, during which time the likes of Vettel and Hamilton helpfully alerted race control about debris and oil patches which needed attending to. Or were they hoping to drag the Safety Car period out for longer and reduce the need for fuel-saving later on in the race?

Whichever, when the restart finally came Hamilton didn’t seem ready for it, which allowed some breathing space for Vettel, who had been having trouble whit his KERS harvesting behind the Safety Car. But any hopes the Red Bull driver had of staying ahead when DRS was enabled two laps after the restart. The Canadian track usually has a single detection point followed by two activation zones, and Hamilton only needed half of the first straight to sail past Vettel. After normal Mercedes-versus-Mercedes service was resumed at the front, the first sign Rosberg was feeling the heat came following his first pit stop on lap 18. Having switched to the soft compound tyres his car skidded alarmingly at the exit of turn four, and only his quick reactions kept it out of the barrier.

Hamilton’s stop on the next lap was a few tenths of a second slower, but even without that he wouldn’t have jumped Rosberg at that point. But he immediately began cutting the gap to his team mate and within four laps was in DRS range.

He was closer than ever when they reached the final chicane on lap 25 and Rosberg braked too late, sailed across the run-off area and did so quickly enough to set a new fastest lap – which stood until the end as his best of the race.

Given that, and the fact his ploy pulled him out of DRS range of Hamilton, he was perhaps fortunate to escape a sanction from the stewards. He wasn’t alone, however – Daniil Kvyat also cut the chicane while defending from Kimi Raikkonen and also went unpunished. But Rosberg was put on notice that he wouldn’t get away with it again.

It took Hamilton five laps to regain the deficit, but soon after he got within range of the other Mercedes he began dropping back again. Suddenly the gap opened up to two seconds. The next time by, lap 37, the pair were over two-and-a-half seconds off their former pace.

It transpired a control electrics fault had struck both cars at around the same time, leaving them without the boost from their MGU-K.

“When you lose ERS then it doesn’t harvest any more,” Rosberg explained, “and then all the braking on the rear is being done by the brakes and then the rear brakes overheated”.

“So it was one problem and then the next problem happened. That just made it massively difficult. I needed to cool the brakes a lot, I lost a lot of power on the straights.”

The pair coped with the problem as long as they could, even making it to their second pit stops. This time Hamilton, despite pitting after Rosberg, made up the deficit and finally got ahead of his team mate. But it proved cruelly short-lived: his brakes had already begun to fail and he retired on lap 46.

Rosberg had also fallen behind Massa at his pit stop, and if the Williams driver had been able to reach the end of the race without pitting again the win would surely have been his. But his tyres soon began to fade, and on lap 48 he made for the pits.

Now Rosberg had a queue of potential winners behind him: the one-stopping Force India of Sergio Perez, followed by the two Red Bulls, with Ricciardo ahead of Vettel, who had caught traffic after his second pit stop.

Massa reappeared behind his team mate, who in turn was following the other Force India. Massa was soon on the radio urging the team to move Valtteri Bottas out of the way – an ironic role-reversal of the situation in Malaysia.

It didn’t look like Bottas complied, but even so he could scarcely have helped his team mate more. He made an ambitious attempt to pass Hulkenberg at the second hairpin but ran wide. That allowed Massa through and teed him up beautifully for a run past Hulkenberg as well.

With the rate Massa closed on the lead quartet it seemed he might breeze past the lot of them. But with three of the cars ahead of him all using DRS they were not easy to pass. When he got a run on Vettel on lap 64 the world champion defended fairly and Massa paid the price of not activating his DRS in the first zone. Ahead of them Rosberg had settled back down into a rhythm. “Once I re-sorted my braking points and everything – because I arrived with so much less speed – so once I sorted out those out, then the power one was actually OK,” he said.

“But the brakes, that was more difficult because I also had to run the brake balance forwards, very very far forwards just to use the front much more, so it was just much more difficult with front locking, and to find my way with that.”

But with Perez increasingly struggling for tyre life and dealing with an electrical problem, Rosberg was able to keep ahead at the all-important DRS detection point. That in turn allowed Ricciardo onto the tail of the Force India, and on lap 66 he bravely dived around the outside at turn one and prised second place out of Perez’s hands with two wheels in the dirt.

“He was driving well and wasn’t making any mistakes and realistically I needed a bit of a mistake from him because they were just getting off the corner so well,” said Ricciardo.

“But then I think, yeah, he got quite close to Nico and perhaps just overshot the braking a little bit in the last chicane. I managed to just stay with him on the exit, get the tow and use the DRS. I knew we were strong braking into turn one, we were really quick into there so, yeah, once I had the outside line free I just basically went in and made it work.”

Now the chase was on and a few laps later came a most unusual sight: a Red Bull slipstreaming past a Mercedes on a straight. Rosberg could do nothing to defend and was finally forced to surrender what might have been an incredible victory in adversity.

Vettel, meanwhile, was unhappy his team had brought him in for his second stop when they did. He’s been stuck behind Hulkenberg during his second stint and believed he should have stayed out until the Force India driver pitted.

“As we saw, until the end there was no way to get past for us down the straights,” said Vettel, who made an unsuccessful move on the Force India on lap 23.

“The Mercedes-powered cars were just too quick. Equally we were in trouble defending to the Williams behind. Basically I was asking to do something with strategy, which I think was possible.

“On the pit wall they have a much better overview but in my case they didn’t really help me to create something different and to use the pace we clearly had. So in the end I pitted and also lost a position to Daniel.”

Nonetheless Vettel grabbed his chance to pass Perez at the end of the penultimate lap. But it all went wrong when Massa tried to follow him by.

They were in the right-hand kink before the first real corner when the pair made contact. Massa appeared to be following the curvature of the road, and Perez jinked left, leading to a catstrophic collision. Both drivers made heavy contact with the tyre wall and were fortunate to escape without injury following a check-up in hospital.

The carnage handed fourth place to Jenson Button, who had pounced on Hulkenberg and Fernando Alonso at the hairpin on the previous lap.

It was a forgettable weekend for Ferrari, as Raikkonen only took tenth thanks to the last lap shunt after spinning on his own at the hairpin, much as he had in practice. Ahead of him were Bottas, Jean-Eric Vergne and Kevin Magnussen. When the Safety Car came out in response to the last-lap crash it virtually guaranteed Ricciardo the win. He duly crossed the line to collect his first ever grand prix victory, and a totally unexpected one at a track which historically has not suited Red Bull.

“I’m just really pleased that I was able to really capitalise today on the opportunity,” he said afterwards. “I could see it in front, when Nico was there and Perez was in between us. I was like, ‘if we can just get Perez I think we’ll be able to make a charge on Nico’. Really pleased.”

“It’s going to take a little bit to sink in but OK, so very proud, great to hear the Aussie anthem. It’s been a few years since I won a race, I think 2011, Monaco in World Series or something, so like three years, it’s a long time, standing on a top step. It’s a feeling I missed a lot.”

After a performance like that, you wouldn’t bet on it taking him three years to score another.