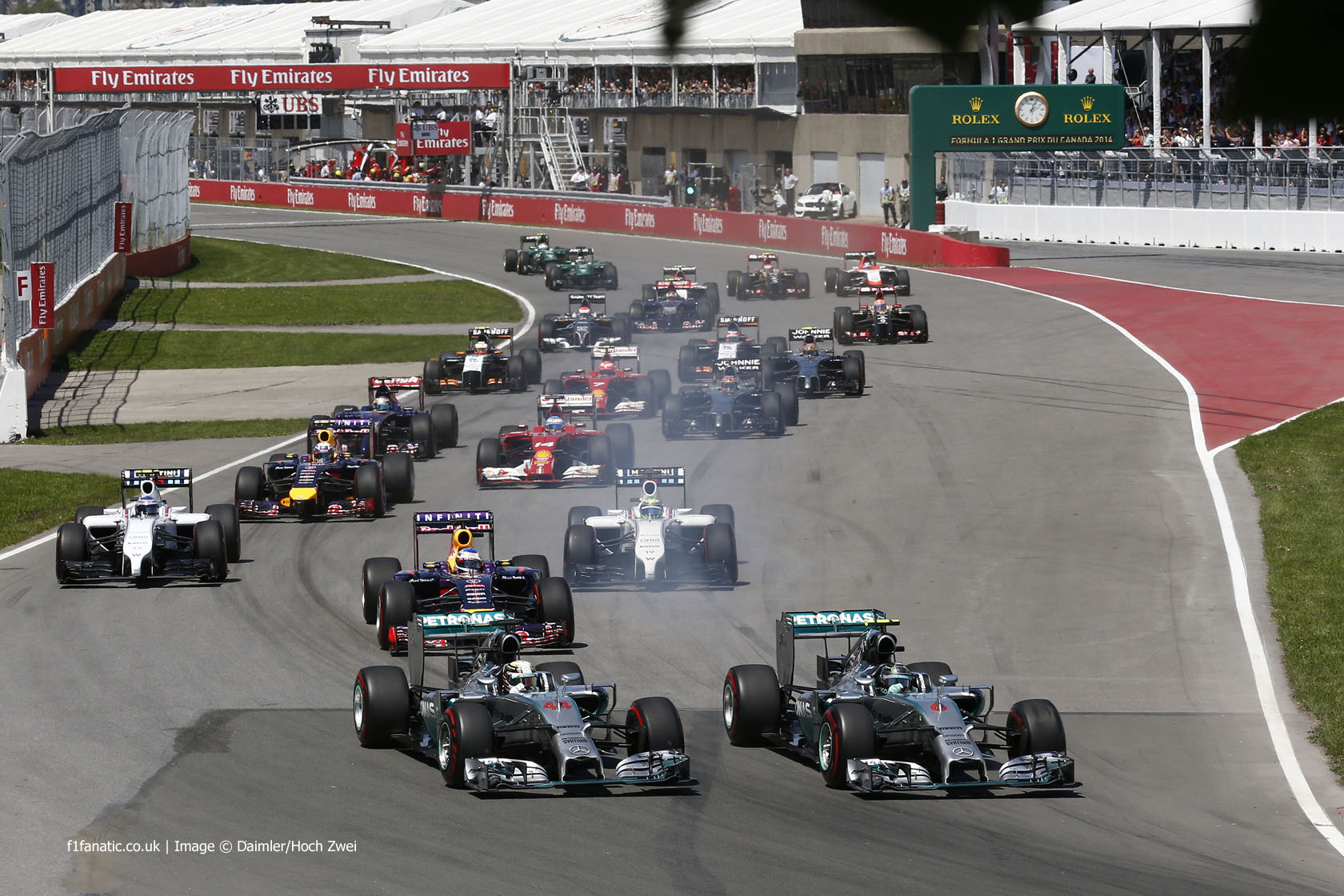 Sebastian Vettel – Came out on top of a very close battle for third on the grid despite saying he didn’t get the first sector right. Took his chance to pass Hamilton at the start but was never going to stay there once DRS was enabled. During the race he questioned his team’s decision to make his second pit stop while he was following Hulkenberg, who hadn’t made his first yet. It dropped Vettel into traffic, and cost him a place to Ricciardo who pitted a lap later. A late pass on Perez – and lightning reactions when an out-of-control Massa flew past him – earned his second podium finish of the year.

Daniel Ricciardo – Was at the opposite end of that four-way battle for third, after struggling with his balance in Q3, so lined up sixth on the grid. Stuck behind Massa, he made an early pit stop on lap 14 which got him ahead. His next visit jumped him past the other Williams and Vettel. Suffering Red Bull’s usual lack of straight-line speed, he finally unleashed a brilliantly-judged pass on Perez to take second with five laps to go. After that he quickly caught Rosberg and enjoyed the rare satisfaction of being able to drive past the Mercedes in a straight line to clinch his first grand prix win. Nico Rosberg – Usually lacked a few hundredths of a second to his team mate in practice but capitalised on Hamilton’s error in Q3 to take his third pole position of the year. When Hamilton got off the line better Rosberg edged him wide to maintain his advantage. But he felt the pressure from his team mate later in the race and nearly put his car in the wall at turn four. Then he out-braked himself at the chicane and cut the corner, setting his fastest lap as he did, but said he eased off on the next lap to hand back any advantage. When the MGU-K problem hit he was briefly jumped by Hamilton in the pits before his team mate retired. Managed his ailing car impressively well, keeping Perez at arm’s length at the crucial DRS detection point (contrary to some reports, the Force India’s DRS had not failed). But when Ricciardo appeared in his mirrors he was powerless to stay ahead.

Lewis Hamilton – “I went wide a couple of times in turn six and then turn eight,” said Hamilton when explaining how he missed out on pole position to his team mate by less than eight hundredths of a second. Rosberg’s firm defending left Hamilton behind Vettel on lap one, but he was soon past the Red Bull. Piled the pressure on Rosberg in the second stint, but after their cars developed MGU-K problems his then succumbed to brake failure, possibly exacerbated by running in Rosberg’s slipstream. He’s now 22 points behind his team mate.

Fernando Alonso – As usual Ferrari flattered to deceive on Friday. Alonso’s seventh on Saturday behind the Mercedes, Red Bull and Williams cars was a fair reflection of what the car could do. Unable to make any progress from there in the race, he would have been eighth had it not been for Perez and Massa’s last-lap smash.

Kimi Raikkonen – Experienced more technical problems on Friday. Reached Q3 but could do no better than tenth, where he finished after replicating his spin from practice at the second hairpin.

Romain Grosjean – Lotus expected Canada’s long straights and short corners wouldn’t suit them, and sure enough Grosjean could only manage 14th on the grid. An unusual rear wing failure put him out late in the race.

Pastor Maldonado – Seemingly cursed with technical problems on Saturday, he pulled over with a turbo inlet problem, then collected a reprimand when he failed to reattach his steering wheel. Having started on soft tyres and made it up to eight by lap 15, a points finish might have been possible. But he’d been coping with power unit problems since the start of the race and they eventually caused his retirement.

Jenson Button – Eighth in Q2, he slipped back one place in Q3. Preferring the soft tyres, he found it difficult to make progress amid groups of cars using DRS, but an opportunistic pass on Alonso and Hulkenberg set him up for an unlikely fourth place.

Kevin Magnussen – Traffic on his out-lap during his final run in Q2 compromised his tyre warm-up procedure, and the result was he came out on the rough end of a very narrow cut for a place in the final ten. Was preoccupied with tyre preservation in the race, trailing Vergne in ninth. Nico Hulkenberg – Narrowly missed the cut for Q3 again, but starting the race on soft tyres proved an ideal strategy in a car that treats its rubber well. Wasn’t able to pass the Red Bulls after his pit stop, and was unfortunate to lose a place to Massa having been forced wide by Bottas. He was also demoted by Button in the closing stages, leaving him fifth for the fourth time this year.

Sergio Perez – Was consistently the slowest Mercedes-powered runner in qualifying and nearly got caught out in Q1 when he had a spin. But in the race he got ahead of his team mate at the start then passed Button in the opening stint. Having picked off the Red Bull drivers following his first pit stop Perez was well placed to capitalise on Mercedes’ problems, but was having minor electrical problems of his own. That helped Ricciardo pass, and Vettel got him as well as the last lap began. Edging off-line in the flat-out kink leading to turn one while Massa was trying to overtake was an unwise move which caused a huge crash, cost him a big points haul and led to a penalty for the next race. Adrian Sutil – Struggling with poor engine drive-ability and a lack of downforce, he was pleased to make it into Q2. Was the last car running after another anonymous Sauber race.

Esteban Gutierrez – Was unable to take part in qualifying after hitting the wall during final practice. Despite the mild-looking impact a new chassis and gearbox was required, meaning he had to start from the pit lane. Struggled for grip in the race until his final stint, when he said “the car felt much better – I even enjoyed driving”. Then his power unit failed.

Jean-Eric Vergne – Missed much of first practice but replicated his excellent qualifying performance of last year by taking eighth on the grid. He was strong in the race as well, jumping Alonso at the start and leading him until the first pit stop. Kept Magnussen at bay to finally score his second points haul of the year.

Daniil Kvyat – Was half a second off Vergne in Q2 on his first visit to the Circuit Gilles Villeneuve, and started seven places behind the other Toro Rosso. Had a scruffy race with a spin at turn one and a trip across the chicane while racing Raikkonen, then suffered another Toro Rosso technical problem.

Felipe Massa – His team mate held him back at the start, and soon afterwards he was under severe pressure from Ricciardo. A slow pit stop droped him behind Vergne and Alonso, but he passed the pair of them and rejoined the leading group. Managed to stretch his second stint out until lap 47 but was never going to make it to the end on his tyres, so pitted again and came out seventh. But he had the pace to win, and looked in good shape after passing his team mate, who ran wide, and Hulkenberg. But he got stuck behind Vettel, missing at least one chance to pass the Red Bull when his DRS did not activate. A last-lap move on Perez ended in disaster.

Valtteri Bottas – Felt he might have found the few thousandths he needed to take third place for the second year in a row had he not caught traffic on his final lap in Q3. Made his second pit stop earlier than Massa and paid a high price, getting stuck behind a group of slower cars. Had just been told to let Massa through when he ran wide, losing the position. He then lost two more places to Alonso and Button, finishing seventh.

Jules Bianchi – Wasn’t able to do a second run in Q1 due to a problem with his car, which left him behind Chilton on the grid. Was in the process of passing his team mate when he was hit at the rear, pitching him into the barrier.

Max Chilton – After 25 race finishes in a row he committed a racing driver’s cardinal sin by spinning into his team mate at the start and putting both out of the race.

Kamui Kobayashi – A penalty for a gearbox change moved him behind Ericsson on the grid, and broken suspension put an end to his race.

Marcus Ericsson – Crashed during qualifying for the second weekend in a row. Said his power unit felt weak on the formation lap and retired early in the race. The team traced the problem to a pipe connected to the turbo.

Who was the best driver of the 2014 Canadian Grand Prix weekend?