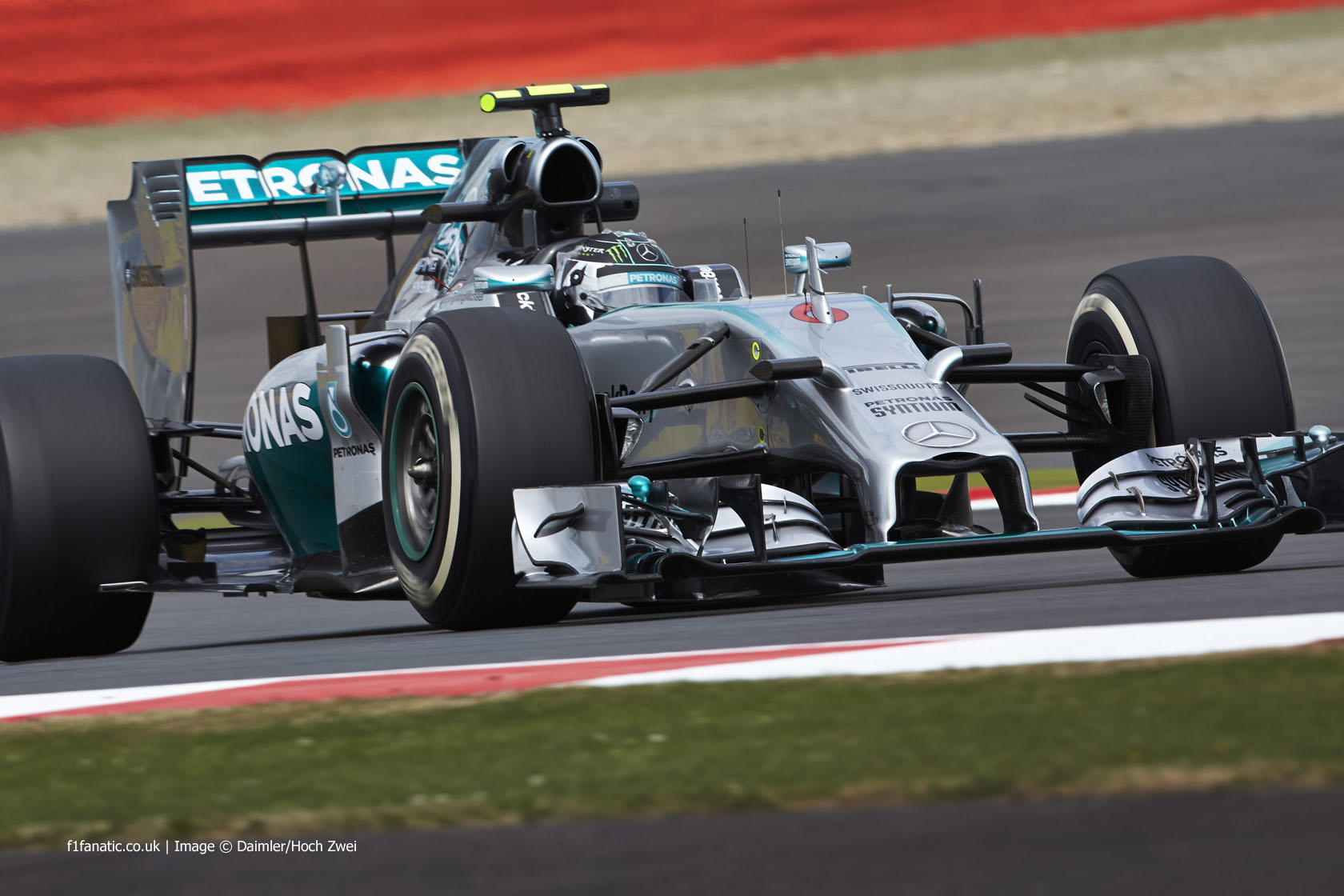 Lewis Hamilton was on course for pole position at home in Silverstone when he made the costly decision to abandon his final lap. That opened the door for Nico Rosberg to capitalise.

Hamilton slumped to sixth as Sebastian Vettel, Jenson Button, Nico Hulkenberg and Kevin Magnussen all beat his time on a rapidly-drying track.

But Hamilton was just one of several drivers to be caught out by rapidly-changing weather as a series of rain showers blew across the track.

Conditions in the 18 minute Q1 session could hardly have been better timed to catch the teams out – with the result that two of the top teams, including the cars which locked out the front row in Austria, were eliminated.

Qualifying began on a damp circuit, but in short order drivers found the rapidly drying track was hurting their intermediates. Dry-weather tyres were clearly the way to go for their final runs, but with time running out the final minutes were clearly going to be closely-fought.

Jenson Button was one driver who entered the dying moments, having had one lap time deleted for running too wide at the final corner. But the McLaren driver improved his team and accompanied his team mate into Q2.

The same could not be said of the Ferrari drivers. Fernando Alonso spun off, missing his only chance to set a time, and with his rivals improving by whole seconds he paid a high price for it.

Adrian Sutil successfully got his Sauber into Q2, but did so partly because he spun off the track, bringing out the yellow flags and preventing several other drivers from improving their times.

A late rain shower caught more drivers out. Among those to suffer were Kimi Raikkonen, who also had a time deleted for running too wide at Club, and both Williams drivers, who had occupied the front row of the grid in Austria.

The big winners were Marussia, who saw both their drivers make a rare venture into the second part of qualifying.

The rain lingered after the end of Q1, so that when Q2 began the moisture level was high enough for drivers to return to using slick tyres. But this time the track dried out more thoroughly, and the lap times tumbled as drivers switched to slicks.

The track remained treacherous off-line, however, as Esteban Gutierrez found out. He put a wheel onto the kerb at the exit of Brooklands and was still fighting to regain control of his Sauber as he reached Luffield. He spun backwards into the barrier, and as in Q1 drivers found themselves having to back off because of yellow flags.

With his final effort Romain Grosjean narrowly failed to make it into the final ten. Team mate Pastor Maldonado was once again sidelined by a technical problem, this time a loss of fuel pressure.

A further sprinkling of rain meant the final 12 minutes of qualifying yielded the biggest surprises yet. It began to fall on the final sector just as drivers were completing their first runs.

It looked like business as usual to begin with, Hamilton leading the way from Rosberg after the first runs. But as the rain intensified it forced Vettel to abandon his first attempt, and he returned to the pits without a lap time on the board.

The drivers waited and watched as the final minutes drew near and the rain once again faded away. For some it seemed inevitable the conditions would not improve: Daniel Ricciardo and Red Bull decided against running again. Team mate Vettel, with nothing to lose, rejoined the track.

Most drivers did elect to run again but they left it very late. Sergio Perez found it hard to warm up the tyres on his Force India and towards the end of the lap – to the displeasure of his team – let the Mercedes drivers past. Rosberg had been getting impatient behind Hamilton, urging his team to tell Hamilton to get a move on.

They cut it so fine that Rosberg crossed the start/finish line with barely a second to spare, and tucked up close behind Hamilton – far from an ideal position to launch a bid for pole position. But in the opening sector of the lap Hamilton decided he wasn’t going to find sufficient time to improve. His team had asked him to let Rosberg by if he found himself in that position, and he did so.

It proved a disastrous decision. The final sector had improved considerably, so much so that Vettel’s first lap moved him ahead of Hamilton. Four more cars beat his time including Rosberg, who ended up three and a half seconds faster than his team mate, illustrating the scale of the misjudgement Hamilton had made.

Button made the most of the opportunity to put his McLaren third on the grid alongside Nico Hulkenberg. He brought some cheer to Force India as Perez fell from third to seventh, ahead of a similarly disappointed Ricciardo.

78 comments on “Rosberg clinches pole as Hamilton slips up again”