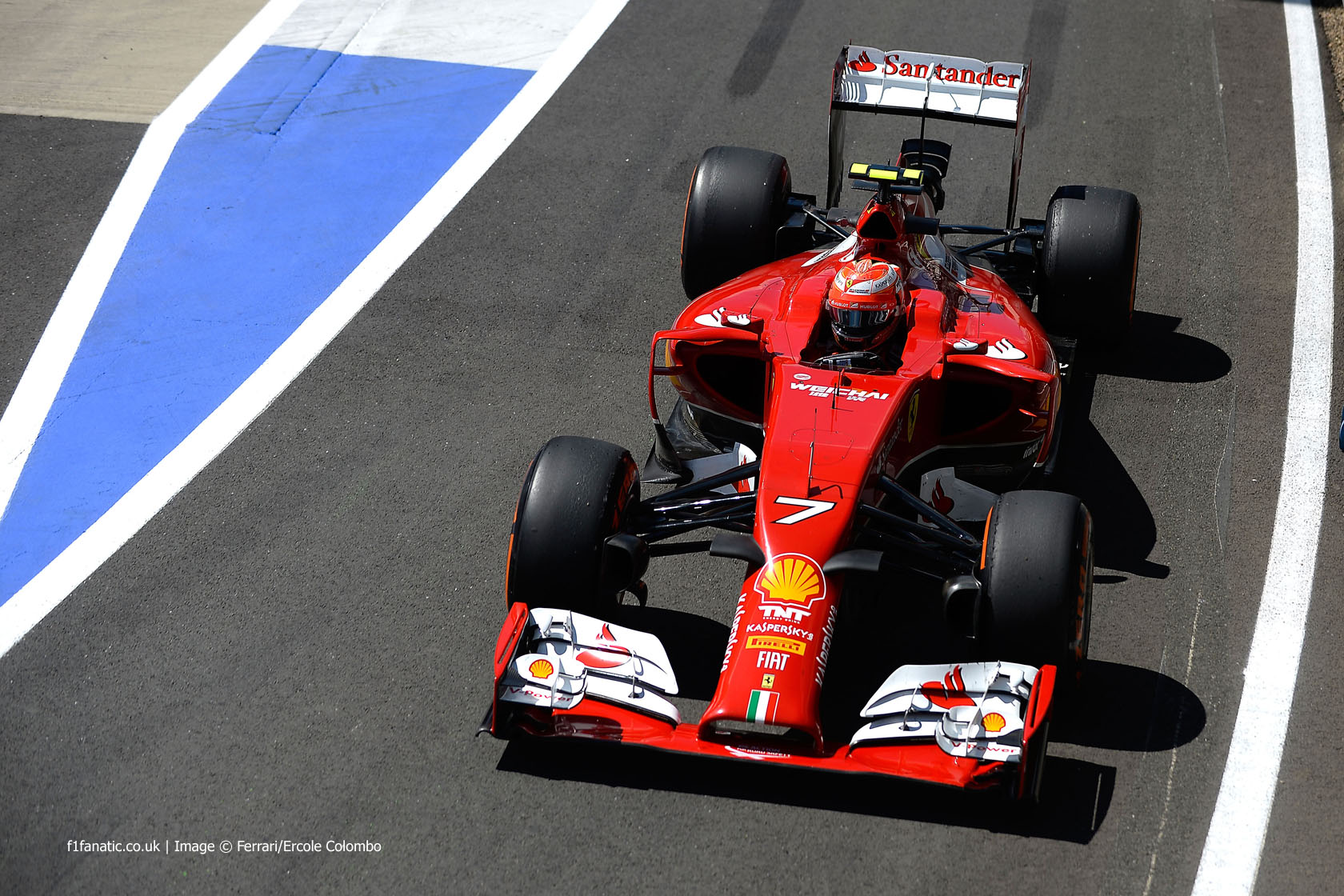 It was a relief to see Kimi Raikkonen climb from his battered Ferrari with no serious injuries after his high-speed crash on the first lap at Silverstone.

The same goes for the other drivers who were involved in the crash and emerged unscathed. They included Felipe Massa, who pitched has car into a spin which potentially spared Raikkonen from suffering a second direct blow to already destroyed nose of his Ferrari, the consequences of which might have been dire.

That contact forced Massa into retirement. Kamui Kobayashi also took avoiding action but was able to continue in the race, albeit with a damaged car.

Ahead of them Max Chilton and Romain Grosjean were showered with debris from Raikkonen’s smashed Ferrari. While Grosjean suffered a damaged visor, Chilton was extraordinarily lucky not to have been badly hurt after part of Raikkonen’s wheel smashed into his car. This photograph taken by a fan shows how close it came to hitting his head:

@maxchilton don't think many cameras actually saw how close you got to being hit today. pic.twitter.com/LbgkOCFETH

The race was stopped for over an hour so the barrier Raikkonen struck could be repaired. But should the Ferrari driver have faced a penalty for single-handedly triggering such destruction?

Raikkonen crashed because he was trying to rejoin the track at unabated speed without sufficient consideration for other drivers.

His initial mistake in running wide at the Aintree corner was innocent. But facing the choice of following the intended route from the run-off to the circuit along the smoother surface, or taking a straighter but potentially quicker line, Raikkonen opted for the latter.

Raikkonen’s path took him across the grass and a rain gully, where the Ferrari got away from him. That caused a crash which ended or spoiled the races of other drivers. Raikkonen shouldn’t be punished for losing control of his car, but for taking an unnecessary risk while rejoining the circuit.

Raikkonen had chosen a gap in the traffic to merge in with and it was just his misfortune that his preferred point had a bump in it which caused him to lose control.

First-lap crashes are not uncommon and are rarely penalised except in extreme cases, such as Grosjean’s at Spa in 2012 which – in the words of the stewards – eliminated leading championship contenders from the race.

The stewards have been asked to show greater leniency when ruling on incidents. Some incidents during the weekend, such as another first-lap collision between Jean-Eric Vergne and Sergio Perez, were ruled not to have been wholly the fault of one driver and so no penalty was given. Accordingly, they should not be penalising drivers for crashes.

The generous extent of the run-off at Silverstone was a talking point during the race weekend – as it had been in Austria. There was more than enough of it at the exit of Aintree for Raikkonen to rejoin the track safely. Any F1 driver – let alone one of his experience – should have been able to do so.

Nonetheless this was a rare error from a driver who is ordinarily a safe pair of hands. Giving him a race ban – as some have suggested – would be excessive.

Former GP2 driver and F1 tester Andy Soucek pointed out after the crash that he had made a similar mistake during a GP2 race at Monza in 2007 and been given a five-place grid penalty. Something similar for Raikkonen, perhaps in addition to a few points on his licence, would seem to me a fair penalty for an act of carelessness which nearly had very serious consequences.

Should Raikkonen have been penalised for causing yesterday’s first-lap crash at Silverstone? Cast your vote below and have your say in the comments.

Should Raikkonen have received a penalty for causing the Silverstone crash?

225 comments on “Should Raikkonen get penalty for Silverstone crash?”