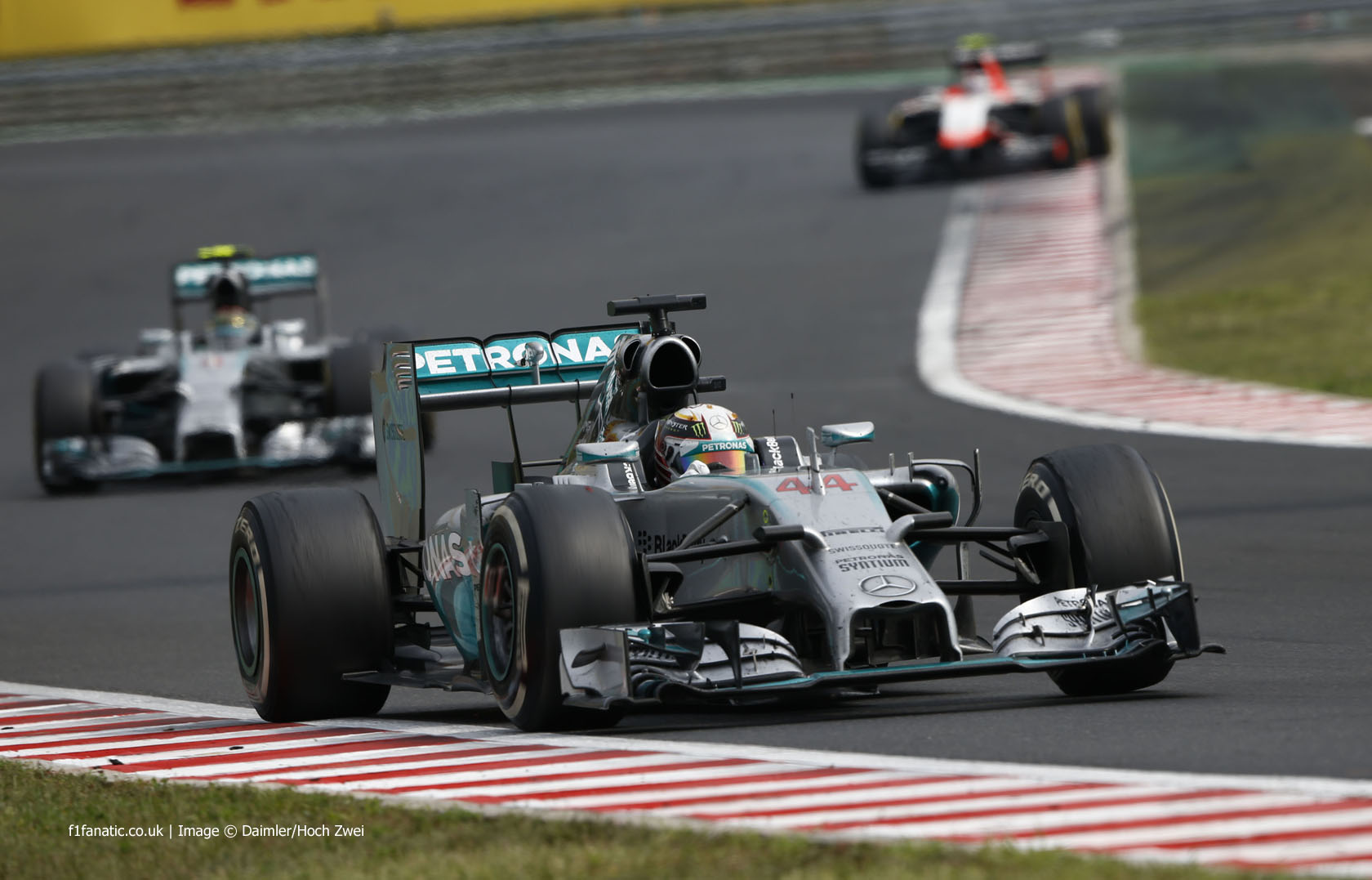 With the drivers’ championship almost certain to be won by Lewis Hamilton or Nico Rosberg, Mercedes’ treatment of its drivers has come under fierce scrutiny for signs of anything that might tilt the playing field in favour of either one of them.

That seemed to happen during Sunday’s Hungarian Grand Prix, when Hamilton was told to let his team mate past – an order he controversially, though perhaps not surprisingly, chose to refuse.

Mercedes have generally avoided putting their drivers on significantly different strategies because that can create exactly this sort of tension. They ended up doing so in Hungary because they hedged their bets on which was the best strategy for their drivers.

By lap 31 Rosberg had spent more than half his race stuck behind Jean-Eric Vergne’s Toro Rosso. With the track drying out and opportunities to overtake growing ever scarcer, Mercedes gave up on the possibility of Rosberg making a pass stick on the track. As they approached the pit lane he was told to take the opposite strategy to Vergne:

At this point, with 38 laps remaining, Mercedes could have put Rosberg on the medium tyre and run him until the end of the race. Toro Rosso had embarked on that plan with Daniil Kvyat two laps earlier.

But they may have doubted the tyre could last that long. It turned out they would have had good reason to, as Kvyat struggled horribly with his tyres at the end of the race.

It’s easy to look back on race strategies with the benefit of hindsight and say that one route was obviously the better choice. It wasn’t clear to Mercedes at the time, and that’s partly why they ended up putting their drivers on different plans – something they have tended to avoid doing in previous races.

Another reason why that happened was that Hamilton had seized the initiative in the following laps. He was shaping up to pass Sebastian Vettel when the Red Bull driver helpfully spun out of his way. He then attacked Vergne and pulled off the move which had eluded Rosberg – a quite brilliant one on the outside of turn four.

Crucially, that also put him far enough of Rosberg that he would stay in front of him when he made his next pit stop:

Hamilton’s tyres still had more to give, so he kept on pushing:

Because Hamilton pitted seven laps later than Rosberg, Mercedes faced a different scenario when deciding what to do with his strategy.

Since Rosberg had come in Vettel and Vergne had also pitted for medium tyres and would clearly be running to the end. Doing the same for Hamilton offered the opportunity to consolidate the places he had gained on them – and Rosberg.

Race strategy at the Hungaroring typically revolves around the sheer difficulty of overtaking. Even with two DRS zones (one of which was shortened slightly this year, reducing its effectiveness) passing remains very difficult. This was easy to forget in the first half of the race when the track was damp, but as it dried in the second half there were far fewer passes throughout the field.

Therefore at the Hungaroring there is greater value in being in front of a rival compared to having newer tyres than they do. Recall how last year a frustrated Vettel was climbing all over Kimi Raikkonen’s tail as the race ended, the Red Bull’s fresher tyres unable to tip the balance in his favour.

This was why Mercedes felt the best option for Hamilton was to make a final pit stop, put on the medium tyres and run to the end – splitting the strategies between their drivers.

“We put Nico on a three-stop strategy and Lewis on a two-stop,” Paddy Lowe explained afterwards. “This caused an interaction which we explained as best we could to each driver.”

This “interaction” was, of course, the controversial moment when Hamilton was told to let his team mate past. Although Hamilton later said he was “very shocked” by the order, he had a clue it was coming soon after his second pit stop when he was alerted to the difference between their strategies:

“Why is he not letting me through?” Mercedes’ decision to put their drivers on different strategies created a new tension. In order to maximise the potential result for the team, the logical thing to do was have Hamilton let Rosberg pass him at the earliest opportunity. That would put Rosberg in a stronger position at the end of the race.

This is fairly routine when two drivers are on different strategies. At the Nurburgring last year, Rosberg was told to let Hamilton pass for the same reason – and he complied within a couple of laps.

But on Sunday it was clear to Hamilton that letting Rosberg past could undermine his chance to stay ahead at the end of the race. Given the pair are locked in a tooth-and-nail fight for the championship, and that Hamilton was poised to finish ahead of his team mate despite his race being scuppered for the second week in a row by a car failure in qualifying, how many on the Mercedes pit wall seriously expected him to comply with the order?

Tellingly, from the messages that were broadcast it seems Hamilton only received a few requests to move over. And unlike when similar scenarios have unfolded at other teams – such as Red Bull in Malaysia last year – it was never escalated beyond the race engineers to more senior team staff.

After the race Rosberg pointed out he had not asked for Hamilton to pull over, but on the radio he made sure the team knew he thought it was time for his team mate to get out of the way: When Hamilton and Rosberg thrilled us with their wheel-to-wheel fight for victory in the Bahrain Grand Prix earlier this year, Mercedes did what they could to make it a fair fight. They put that commitment to fairness in jeopardy in Hungary by deciding to split the strategies between their two drivers.

But despite what the Sunday night strategists say, it was not obvious which was the better option to take. These same people would be fulminating with rage had Mercedes put Hamilton on a three-stop strategy only for him to get stuck behind another car as Vettel did last year.

There are reasons why Mercedes should have considered putting Hamilton on the more aggressive strategy. They could have anticipated Fernando Alonso trying to make it to the end on a set of soft tyres and the difficulty he would cause. And as Hamilton had further sets of unused soft tyres available he was the best-placed of their drivers to make a more aggressive strategy work.

But we only know with hindsight how quickly Rosberg was able to catch the front runners, which is what makes his strategy look better in retrospect. And had both Mercedes drivers been on it, Hamilton would not have been contributing to the slow pace of the leading trio, and they wouldn’t have been caught as quickly.

Nor was the order to Hamilton proof that Rosberg’s interests take priority over his – or, to adopt the tiresome mantra of the conspiracy theorist, that partisan ‘Germans’ at Mercedes are favouring their ‘German’ driver.

Rather, this was an object lesson that it’s not always possible for strategists to simultaneously do what’s best for the team and what’s best for each of their drivers. With Mercedes’ position in the constructors’ championship increasingly secure, now is the time to reaffirm their commitment to ensuring their drivers race on an equal footing.

Radio transcripts by @WillWood. ‘Lap’ refers to the lap on which the message was broadcast.