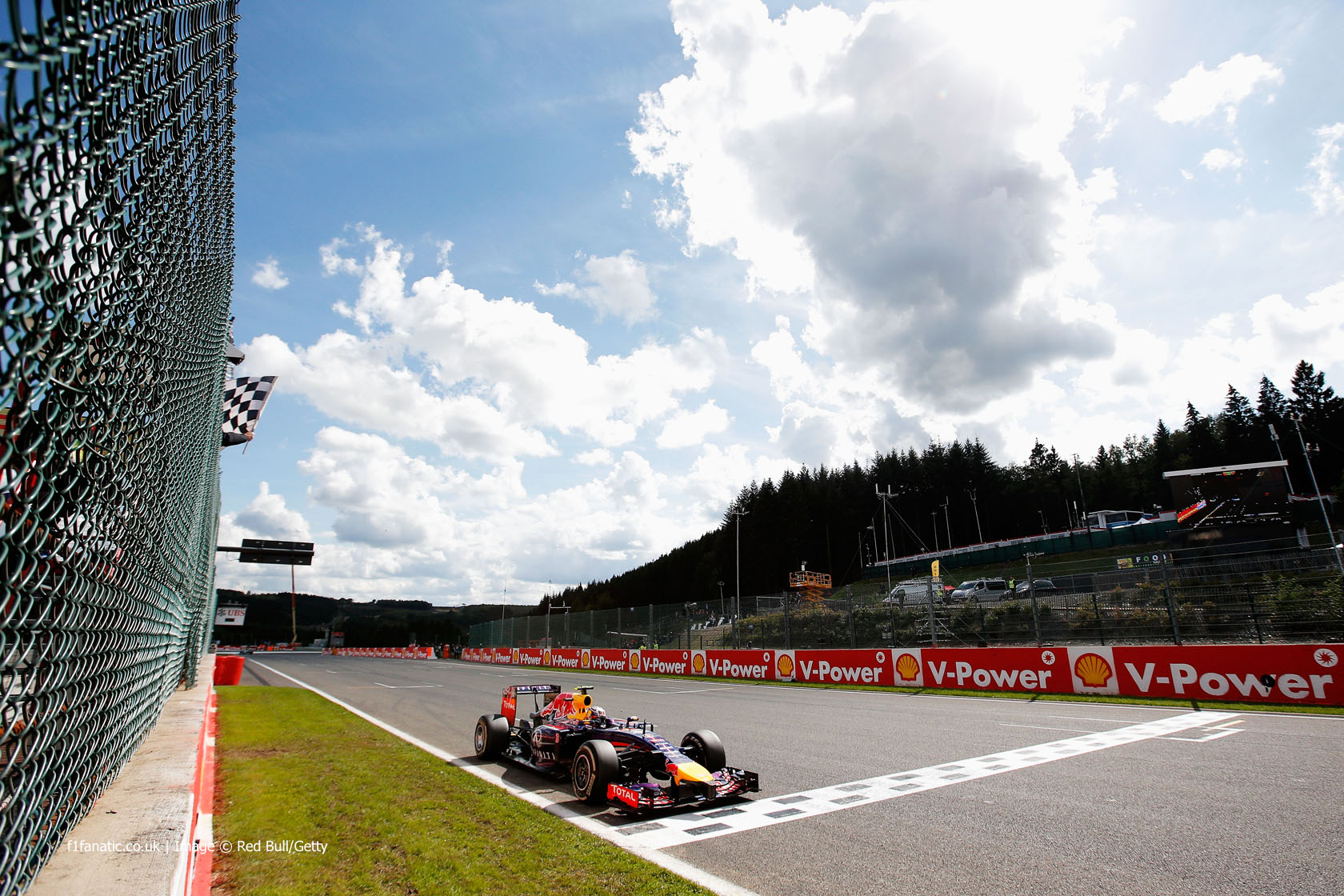 Daniel Ricciardo has made a name for himself in 2014 by being the one driver who is always ready to capitalise when something goes wrong for the Mercedes drivers.

In Montreal it was an unlikely double technical failure. At the Hungaroring it took another glitch for Lewis Hamilton and a timely Safety Car appearance.

And at Spa-Francorchamps the catalyst was a collision which has further jeopardised the fragile equilibrium between Mercedes’ championship-contending team mates. The opening moments of this year’s Belgian Grand Prix looked like a replay of the last one. Hamilton led the field as they plunged into Eau Rouge with Sebastian Vettel stalking him as they came over the crest on the long run towards Kemmel.

Like last year Vettel jinked to the left and drew alongside the Mercedes – but unlike last year he wasn’t able to make it past. The Red Bull driver ran out of room on the outside of Les Combes and took to the ample run-off area. In doing so, he surrendered second place to Nico Rosberg.

Rosberg had started from pole position but been beaten to the draw by Hamilton and Vettel. Hamilton had actually pulled up too late when they reached the grid and had to reverse back into his correct spot before the lights went out.

Having regained his place from Vettel, Rosberg quickly hauled in Hamilton over the remainder of the first lap, and the pair were separated by just half a second as they came past the pits. Even without the benefit of DRS, Rosberg had Hamilton on the defensive at Kemmel, and for the second lap in a row the race leader was covering the inside line as they approached Les Combes. What happened next has already been discussed exhaustively and no doubt will continue to be as it marked another significant moment in this year’s championship battle. But title contenders are supposed to be of sufficient pedigree to avoid such incidents, and team mates are supposed to exercise an extra degree of caution to avoid such collisions in the first place. All that being so, the pair had absolutely no business making contact, especially not in such a feeble, amateurish fashion.

Hamilton was clearly ahead and had the racing line, so the burden of responsibility falls entirely on Rosberg’s shoulders. It looked utterly careless, but Rosberg has already made one seemingly careless mistake which worked out very well for him this year. Now he has made two, and will therefore become the target of more intense suspicions.

The manner in which they collided – Rosberg’s front wing making contact with Hamilton’s left-rear tyre – evoked memories of a near-miss between the pair during their battle in Bahrain. On that occasion Rosberg took exception to a similar move Hamilton had made, albeit one which was entirely within the rules. Rosberg had further cause for irritation before the summer break when Hamilton declined to let him past when he was told to in Hungary – an incident which was still being discussed within the team when the Spa weekend begun.

No doubt this latest incident will have further consequences as well. But in the race it left Rosberg with a damaged wing – and Hamilton with a puncture tyre and three-quarters of a lap between him and the pits.

Meanwhile Rosberg now led, albeit under pressure from Vettel. That proved only temporary, as one Red Bull was soon replaced by the other. Ricciardo had already passed Fernando Alonso on lap four, and on the next tour Vettel nearly lost control of his car at Pouhon, allowing Ricciardo by into second.

He wasn’t able to do anything about Rosberg, however, even as the Mercedes driver struggled with a loss of downforce. But with Hamilton out of contention, Rosberg took the first opportunity to replace his front wing when he pitted for new tyres on lap eight. Kimi Raikkonen came in from sixth on the same lap, and two laps later Red Bull brought Vettel in, but he lost his position to the Ferrari. Ricciardo’s pit stop two laps later temporarily handed the lead to Valtteri Bottas, but once the Williams driver had made his final pit stop Ricciardo was back at the front of the field again.

Raikkonen’s early first pit stop therefore promoted him to second, and behind him Vettel was receiving attention from Rosberg. The Mercedes driver was unimpressed with Vettel using the run-off at Paul Frere curve as an extension of the track, and told his team on the radio Vettel was “cheating at turn 15”.

Shortly afterwards Vettel was told to pay more attention to the track limits, and Rosberg took the opportunity to get a run on him as they approach the chicane. He braked a touch too fiercely, however, locking up his front wheels, and now Bottas was tucked up under his rear wing. As they reached the DRS zone at Kemmel, the Williams driver used his car’s excellent straight-line speed to excellent effect, and having been lining up a move for third place Rosberg was now down to fifth.

The other Mercedes, meanwhile, was a very unhappy place. Hamilton was struggling with a badly damaged floor which was getting worse, and the gains he was making on the cars ahead were gradually diminishing.

Even so, from an early stage he seemed intent on parking his car, despite his team’s assurances that his pace was good and that a Safety Car appearance would give him a strong chance of scoring points. Had Hamilton fallen into the same mindset which led him to abandon his qualifying run at Silverstone?

“My thought is that I already had an engine that’s blown up in the last race,” he explained afterwards. “So I may have lost one engine, so I have one engine less than Nico already, which puts me on the back burner already for the next few races.” For the Mercedes drivers, everything is seen through the prism of their battle with each other. That suits Ricciardo fine as it keeps giving him chances to win. Rosberg’s damaged front tyres meant he had to make an early second pit stop, forcing him to commit to a three-stop strategy. Once he had done so both he and Ricciardo had one stop left to make – and the pair were separated by almost half a minute.

Rosberg came in for his final pit stop with nine laps left to go. Once back on track he lost little time in passing Bottas and Raikkonen, meaning Red Bull had little opportunity to pit Ricciardo in response had they wanted to.

Rosberg had eighth laps to cut Ricciardo’s 20-second lead, but despite lapping almost two seconds faster than anyone else on the track he simply didn’t have enough laps to get the job done. Unusually the Red Bull proved particularly fleet on the straight, a trait owed to its skinny rear wing. “We pretty much came here with a low downforce setting,” Ricciardo confirmed afterwards.

“We knew it would maybe affect us a bit in the second sector but we believe the car has a good base of downforce to sort of get through the second sector good enough and then what we lose naturally on the straights, running this type of wing, was something that put us back in with a fighting chance for sector one and two.”

Ricciardo used his tyres wisely, and set his fastest lap of the race on the final tour to win by a comfortable 3.3 seconds. Rosberg’s time lost behind Bottas had proved costly. Life was far from comfortable for their pursuers. Raikkonen’s early first pit stop left him with a long final stint during which he was easily passed by the flying Williams of Bottas. Even so, fourth represented Raikkonen’s best weekend’s work since he returned to Ferrari.

Vettel emerged from a thrilling four-way scrap to claim fifth. Kevin Magnussen defended his position robustly from Fernando Alonso, leading the Ferrari driver to shake his first at the McLaren while he was edged aside at Bruxelles.

But it was on the run towards Les Combes that Magnussen crossed the line, forcing Alonso onto the grass on the straight. The stewards handed him a 20-second penalty after the race which dropped him out of the points.

That promoted Jenson Button in his place, who discovered that being Magnussen’s team mate did not exempt him from similarly firm treatment, and Alonso. The Ferrari driver served a five second penalty in the pits after his mechanics were on the grid after the 15-second warning before the formation lap, and should be grateful his penalty wasn’t more severe.

Behind them the Force Indias sandwiched Daniil Kvyat’s Toro Rosso for the final points after Magnussen was penalised.

For Hamilton, however, the race had been over for some time. Mercedes finally decided there was no realistic hope of gaining anything from the race with six laps to go, and called him in to retire.

All season long there has been little to separate the Mercedes pair in terms of sheer performance, so perhaps it was inevitable that a collision like this was always going to happen. But the ease with which Rosberg could have avoided it, and his self-serving excuses afterwards about ‘not having seen’ the incident and so being unable to comment on it – as if he hadn’t had a better view of what happened than anyone – will not endear him to those inclined to see the worst in a collision which served him very well.

How well? His points lead over Hamilton more than doubled this weekend to 29. And that scoreline is all these two care about at the moment.