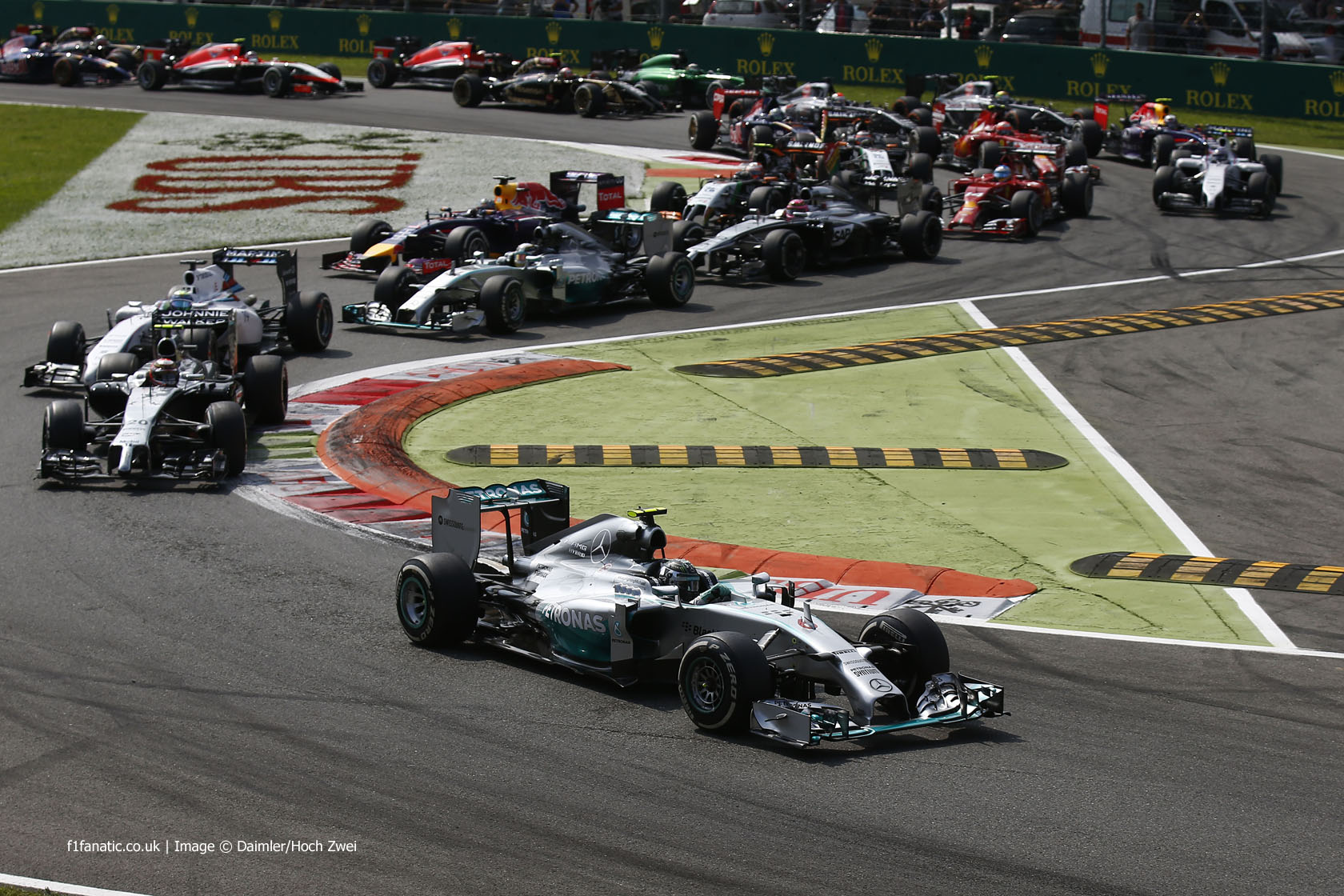 Which F1 driver was the best performer during the Italian Grand Prix weekend?

Sebastian Vettel – Started in front of Ricciardo but finished behind him. Red Bull used an aggressively early pit stop to jump him ahead in the queue, but he fell prey to Ricciardo at the end of the race.

Daniel Ricciardo – Started poorly but came on strong late in the race, picking off a string of other cars before finally out-foxing Vettel with a cunning move at the Roggia chicane to take fifth. Nico Rosberg – Missing final practice due to a technical problem didn’t help his cause but he generally seemed to be a couple of tenths slower than Hamilton, who at any rate was even less well served by Mercedes reliability. Messed up the chicane twice during the race, and each time took the conservative option of going down the run-off area, as to do otherwise would have risked a second pit stop and an even lower finish which would have sacrificed more points to his team mate.

Lewis Hamilton – Consistently the quicker of the two Mercedes drivers – but for a technical glitch in second practice he would probably have headed every session. On pole position for the first time since May, he kept his cool when his start mode failed and patiently passed Magnussen and Massa before closing on Rosberg. Using his initiative he spurned the team’s advice to look after his tyres at the beginning of the second stint, instead bringing pressure to bear on Rosberg which provoked the mistake which decided the race.

Fernando Alonso – The highest non-Mercedes-powered qualifier on the grid, he held his seventh place until an ERS failure put him out.

Kimi Raikkonen – Failed to make the cut for Q3 but edged into the points in the race. “As soon as I got close to the cars ahead of me, I lost aerodynamic downforce and the car was sliding all over the place,” he said.

Romain Grosjean – The E22’s handling looked even more dire than usual – both drivers struggled to get it stopped at the chicanes during practice. Grosjean’s qualifying was compromised by a technical problem so he failed to reach Q2, then a poor start left him last. Gutierrez inexplicably swiped his car during the race, but Grosjean continued to finish 16th.

Pastor Maldonado – Qualified and finished ahead of Grosjean, but couldn’t get close enough to the Toro Rossos to attack and finished a lap down. Beating the Saubers was an achievement under the circumstances. Jenson Button – Magnussen pipped him by six-hundredths of a second in qualifying and Button finshed behind him on the track as well, before his team mate’s penalty. Scrapped furiously with Perez but crossed the line behind his former team mate. “I had an amazing battle with Checo,” he said. “We took the first Lesmo side by side, which doesn’t happen very often. It’s a pity I couldn’t get past him – I tried so many times – but he was so strong under braking that to match him into the turns I was locking up the fronts and the rears, which left me struggling for position on the exits.”

Kevin Magnussen – Made a beautiful start from fifth on the grid and passed Massa for second at the first corner. He kept it clean when the Williams and Hamilton inevitably came passed him, and was unable to keep Bottas behind as well. He was somewhat hard done by with his penalty, but there’s no escaping the fact Bottas was ahead of him as they reached the corner and Magnussen elbowed him off. Nico Hulkenberg – Unlike in Belgium he made it as far as Q2, but no further. “The main issue was the heavy traffic on my out lap going into the final corner, which really hurt my preparation,” he said. “Everybody was backing up so I had to slow down and lost tyre temperature and pressure, and could not improve my time.” Despite a great start he never figured in the race – afterwards Hulkenberg revealed the team had discovered damage on his car which hampered his performance.

Sergio Perez – Got his car into Q3 and must have taken some satisfaction from beating both the McLarens. His fight with Button was superb, hard-but-clean stuff, and Perez showed restraint by not getting stuck into Magnussen who he did not need to fight.

Adrian Sutil – Didn’t think the car was capable of a higher qualifying position than his 14th place, and he finished one place lower after being passed by Maldonado at the start.

Esteban Gutierrez – Lined up behind Sutil after making a mistake at Ascari during qualifying. Unnecessarily made contact with Grosjean, which was dangerous, and deserved a tougher punishment than his largely inconsequential 20-second penalty. Jean-Eric Vergne – Started nine places ahead of his team mate and finished behind him. Vergne admitted afterwards he’d been struggling for pace all weekend.

Daniil Kvyat – Said he wasn’t comfortable with the car on Friday, and the next day it emerged he would have to take a ten-place penalty for an engine change. That left him 21st on the grid, but by making a late pit stop he was able to pass his team mate in the second stint and get within range of the points. Unfortunately a brake disc then failed, and Kvyat did well to avoid having a major crash at the Rettifilio.

Felipe Massa – Finally delivered his first podium finish of the season after a clean weekend. Qualified behind Bottas but got a clean start, though Magnussen muscled past him at turn one. Massa soon overtook the McLaren but was then told not to use his engine’s overtake mode, after which Hamilton got by. After that he had a quiet run to the flag.

Valtteri Bottas – Out-qualified Massa to take third but lost eight places with a horrible start. Drove a race of recovery from then on, patiently making his way through the field to take fourth. Lapped quickly in clean air at the end of the race – a glimpse of what might have been.

Jules Bianchi – Was disappointed to qualify behind Kobayashi and was unable to beat the Caterham in the race as well, having lost some time scrapping with Grosjean.

Max Chilton – The usual qualifying performance – half a second off Bianchi – was followed by an unusual retirement when he launched his car off a kerb and into a gravel trap at the Roggia chicane.

Kamui Kobayashi – Demonstrated his class on his return for Caterham, beating Ericsson by almost nine-tenths of a second in qualifying (despite having to give his car to Roberto Merhi in first practice) and beating the Marussias in the race.

Marcus Ericsson – Qualified last, then ordered to start from the pits and given three penalty points on his licence for failing to slow for yellow flags during final practice. Therefore it was no surprise to see him running last at the flag.

Who was the best driver of the 2014 Italian Grand Prix weekend?