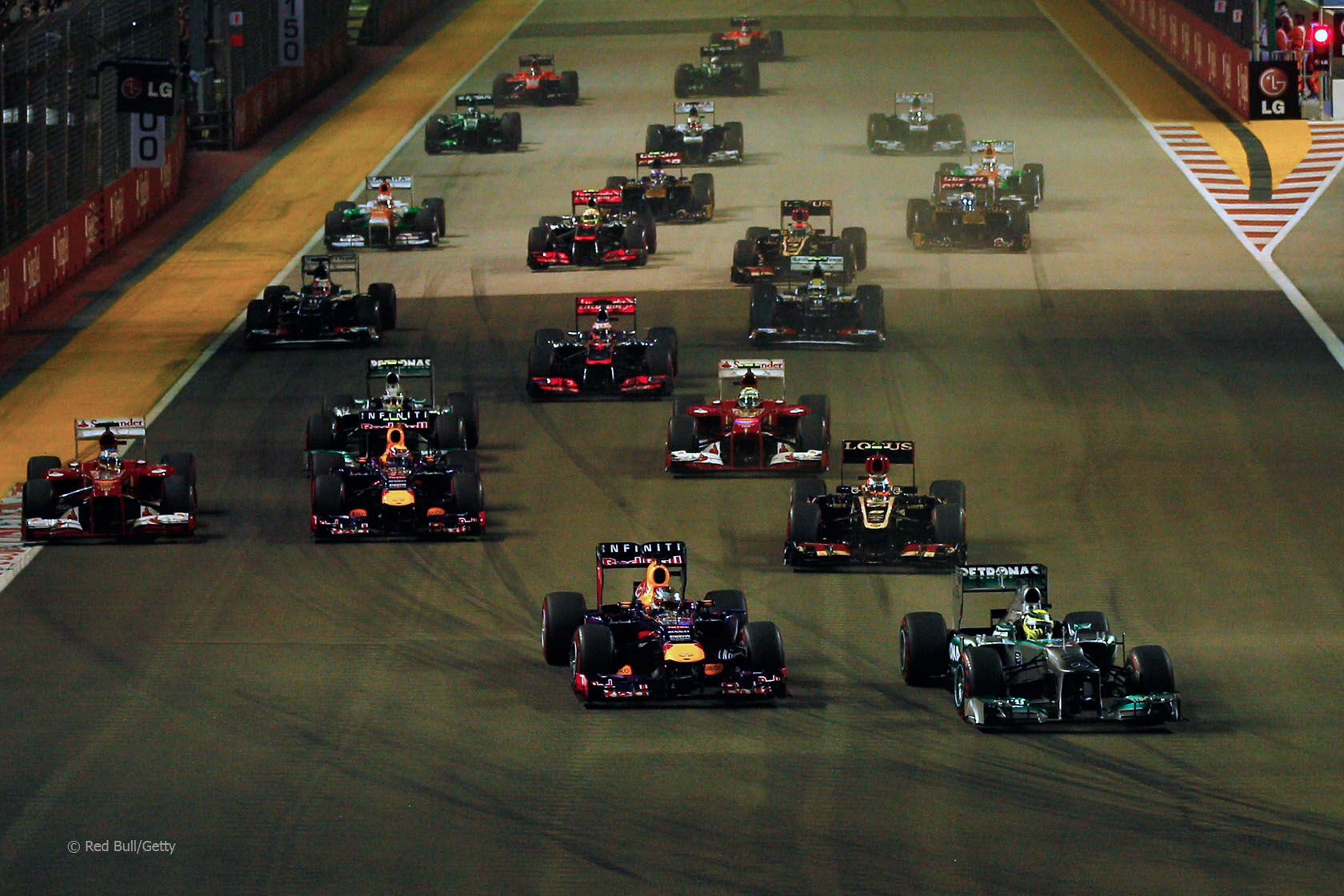 Over its first six seasons as part of the Formula One calendar, Singapore has proven to be one of the longest and most demanding grands prix of the championship.

Drivers and cars alike are pushed to extremes over the course of the two-hour race. The Marina Bay course sports more corners and braking points than any other circuit on the calendar.

But this year, the challenge of the Marina Bay circuit will be that much greater for the drivers with the FIA having suddenly enforced a ban on many types of team radio communication in the build-up to this weekend.

Drivers must now face the prospect of one of the most demanding races of the season knowing they will no longer receive the endless stream of reminders about tweaking their power unit settings and improving their racing lines that they had once relied upon.

With Singapore being one of the toughest races of the season in terms of braking, drivers will be relived that warnings about brake wear levels will not be imposed until the next round in Japan.

Despite its many corners and the close proximity of barriers lying in wait to punish any mistake, Singapore has produced some entertaining races over its relatively short history. This is partly due to the handful of genuine overtaking opportunities that exist, especially into Memorial Corner (turn seven), turns ten and fourteen.

With the slowest average race speed of any circuit on the calendar bar Monaco, the Singapore Grand Prix becomes as much a test of endurance as of speed with the high humidity, even after the sun has set. It is dependably one of the most strenuous races of the year, notwithstanding the fact the new cars are less physically demanding.

The risk of a Safety Car intervention is at its highest in Singapore, with Bernd Maylander being called into action at least once during every Singapore Grand Prix thus far. Although the first appearance of the Safety Car made at this track will always be the most notorious.

Due to the high braking demands, F1’s new turbo hybrid engines will also be pushed to the limit this weekend. According to Renault, the energy stores and MGU-Ks will face one of their toughest challenges of the season this weekend due to the high workloads around the circuit.

The enthralling battle for the drivers’ championship between Lewis Hamilton and Nico Rosberg has been slowly building to a boiling point all season long – and even more memorable moments may yet unfold this weekend under the lights in Singapore.

The first of the final six flyaway races of the year, Singapore plays host to the second night race of the season and is one of two street circuits that will round out this year’s championship. After two races on very low-downforce circuits, the Marina Bay track puts emphasis firmly back on downforce and mechanical grip – providing an opportunity for some teams to claw back performance with aero upgrades. On paper, Singapore offers Red Bull their greatest opportunity for a fourth victory of all the remaining races. The frequent corners, lack of long straights and high downforce demands of the Marina Bay circuit will likely negate the advantages the Mercedes powered cars enjoyed in Monza and may play right into the hands of the RB10.

Daniel Ricciardo beat his four-time world champion team mate to the chequered flag for the third consecutive race in Monza. But Sebastian Vettel has won the last three races in Singapore, and must consider this a vital chance to put one over his team mate on Sunday for a change.

Hamilton’s Monza victory could prove vital should he claim his second world championship in Abu Dhabi. Although the gap to Rosberg remains at 22 points, he know another setback could leave him in a very weak position.

Having seemingly thrown away victory in Italy, Rosberg will be desperate to show that he is not buckling under the pressure from his team mate by delivering a clean and consistent performance this weekend.

The pair disputed victory here in 2009 and the battle was settled in Hamilton’s favour when Rosberg made a rare slip-up at the pit lane exit, incurring a penalty. The seismic news following the Italian Grand Prix of Luca di Montezemelo’s impending departure may not have an immediate effect on the day-to-day running of the team, but is likely to be a focus of interest for the media this weekend.

It will be business as usual for them, and the challenges and unpredictability promised by this weekend’s race gives them a glimemr of hope they could yet avoid their first win-less season for over 20 years.

But having struggled to master the new brake-by-wire systems in this year’s cars, Kimi Raikkonen is facing another challenging weekend.

Fernando Alonso will be feeling somewhat more confident, having taken one of his most memorable victories here in Singapore in 2010, capitalising on a slip-up by Sebastian Vettel in qualifying to take pole position and hold off the Red Bull by less than three-tenths of a second at the chequered flag.

After a difficult weekend in Monza, Singapore should prove a better venue for Lotus. With Renault having identified Singapore as a race where their engines should be closer in performance to the Mercedes, Romain Grosjean will be looking to maximise the E22’s performance at a circuit where he achieved his best qualifying result of 2013. After some encouraging signs in the last two races, McLaren will know that the advantage they enjoy with their Mercedes engine will not prove so effective this weekend.

Kevin Magnussen delivered some impressive performances in Spa and Monza but has seen his efforts undone with two consecutive post-race penalties for avoidable incidents.

He arrives at Singapore as the only driver in the field with no previous experience of the circuit. As well as getting to grips with one of F1’s most challenging races, he must avoid giving the stewards any further reasons to take away any more of his hard-earned points.

One point is also all that separates the team from McLaren in their battle for fifth in the constructors’ championship. As Monza showed that this particular duel could well be decided on track, Force India will be looking for a similarly effective performance from Sergio Perez this weekend.

Sauber came closest to ending their record points drought at the last high-downforce circuit in Hungary. With this in mind, the team are looking for an improvement in performance with some significant upgrades this weekend, according to the team’s Head of Engineering, Giampaolo Dall’Ara.

“We will be introducing an aerodynamic update package with a new engine cover and a modified front wing,” he said. “The team is feeling quite positive about regrouping in Singapore.”

It would be a timely shot in the arm as rumours point to a potential takeover of the team in the near future.

With just six races left to convince another team to sign him for 2015, Jean-Eric Vergne has become increasingly vocal about his belief in his abilities. But he badly needs a strong performance this weekend to help him find a seat for next season.

Unreliability remains a major problem for the team. In Monza brake failure scuppered Daniil Kvyat’s pursuit of a points finish, which will not inspire confidence for this particular race.

Mercedes have clarified how the Williams drivers can access the ‘overtake’ mode on their engines, which became a point of discussion at the last race following the battle for position between Massa and Hamilton.

Mercedes’ High Performance Powertrains engineers are embedded within Williams to control the technical parameters of the engines and it is only this which determines whether the overtake button can be used.

As for whether Williams are allowed to use their overtake button to defend against Mercedes drivers, note that Valtteri Bottas was told he could use his when racing Hamilton during the German Grand Prix.

The last time Marussia raced around a street circuit, they left with their first ever world championship points. Naturally, the team are hoping for another good weekend in Singapore, although another points finish may be a little too much to ask for this time around.

Having been a part of the Caterham takeover deal ahead of the British Grand Prix, Christijan Albers departed from the Leafield team immediately following the Italian Grand Prix. Whether this is a sign of further troubles to come for the team remains to be seen.

Kamui Kobayashi will once again retain his race seat for this weekend.

Are you going to the Singapore Grand Prix?

If you’re heading to Singapore for this weekend’s race, we want to hear from you.

Who do you think will be the team to beat in the Singapore Grand Prix? Have your say below.