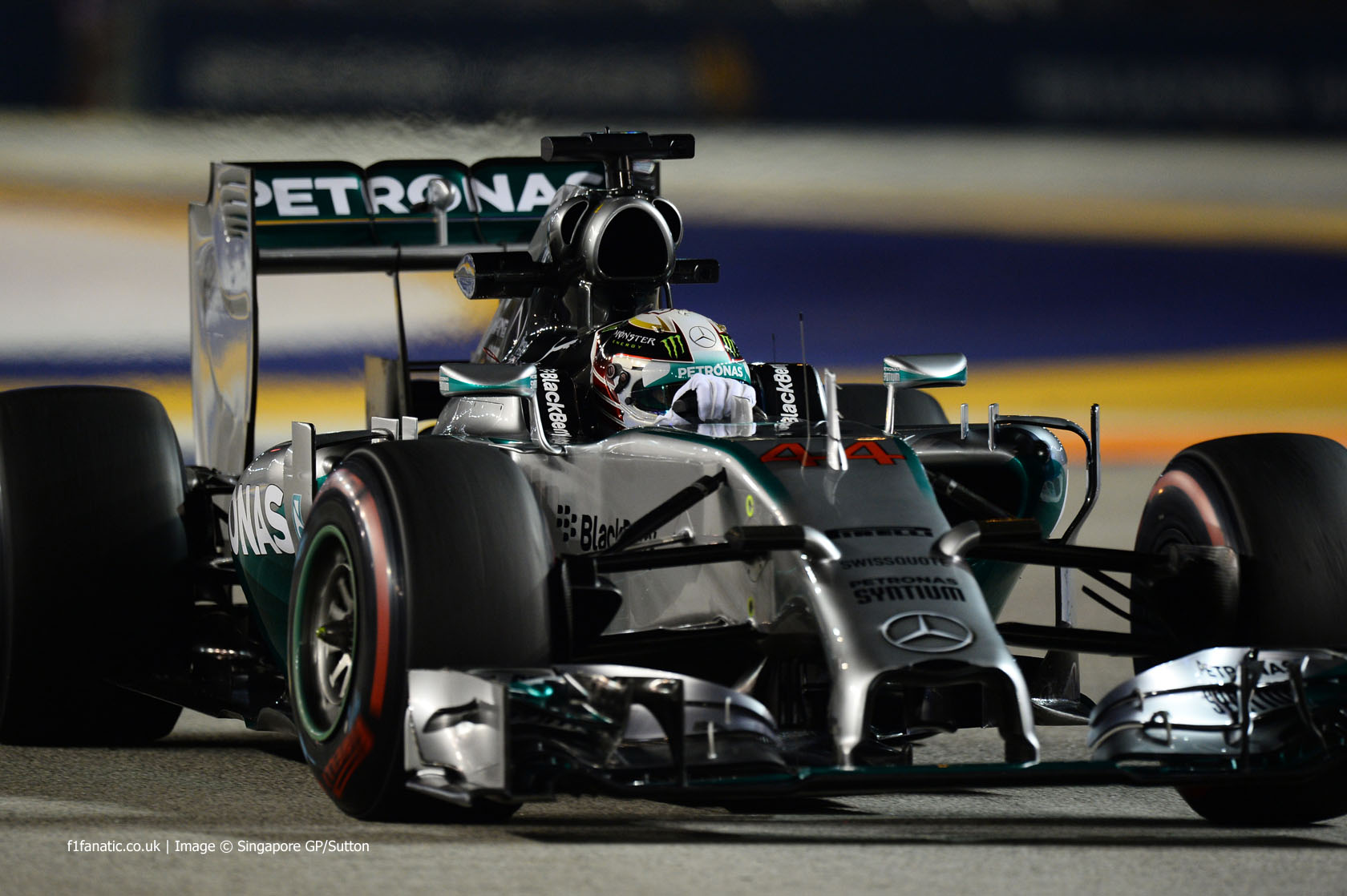 With two minutes to go in Q3 there was no Mercedes in the top five. But they bounced back to claim their seventh front-row lock-out for 2014.

Ferrari looked like being the closest challengers to Mercedes to begin with but the Red Bull pair evicted them from the second row with their final runs.

With the super-soft tyres offering a lap time gain of two-and-a-half seconds over the soft compound, every driver had to use the softest tyres to ensure a place in the second phase of qualifying.

Nico Rosberg slipped up on his first run. He braked too late at turn eight but opted to use the run-off to avoid damaging his tyres.

The importance of preserving his rubber for the grand prix was clearly uppermost in his mind as he was later heard reminding his team on more than one occasion to “tell me when I need to go slowly because it’s race tyres”.

Rosberg and Hamilton both later got clean laps in but the Mercedes drivers weren’t quickest at this stage. As in two of the three practice sessions it was Ferrari who led the way, but this time it was Kimi Raikkonen on top, followed by Fernando Alonso.

Sebastian Vettel had to abandon his first run on super-soft tyres when he was held up by Marcus Ericsson and Daniil Kvyat. But he comfortably made it through on his next attempt, leaving Adrian Sutil and Pastor Maldonado to accompany the usual quarter of Marussas and Caterhams in elimination.

Rosberg’s attempts to minimise his tyre consumption suffered a setback in Q2 when he had to make a second run to guarantee his place in the final ten – unlike his team mate.

Hamilton’s first run put him on the top of the times, albeit with the two Ferrari drivers within seven-hundredths of a second of him. Rosberg was next, but with his time looking vulnerable he elected to run again. Despite complaining about being held up by Vettel, Rosberg set a 1’45.825 which put him comfortably on top.

Jenson Button narrowly failed to make the cut with his last run, falling short by 17 thousandths of a second.

But his disappointment was nothing compared to that of a furious Romain Grosjean, who directed his anger at his engine after setting the slowest time in Q2.

With all eyes on the contest between Mercedes and Ferrari, the first runs in Q3 produced a surprise.

Hamilton posted the fastest time through the first sector but clambered across the kerbs at turn 17 and slipped to sixth. That at least put him one place higher than Rosberg, who began the session on used tyres.

The Ferrari drivers were unable to take advantage as Felipe Massa and Daniel Ricciardo claimed the provisional front row – but that all changed with the final runs.

Rosberg seemed to have found enough time when he crossed the line with a 1’45.688 to jump into first place. But despite a brief lock-up at turn one, Hamilton found enough to unseat his team mate from first place and clinch his sixth pole position of the year.

He did it by a mere seven-thousandths of a second. “Damnit!” Rosberg exclaimed when told his team mate had taken pole position off him.

Ricciardo moved in front of Massa with his final run and Vettel took fourth – but believed he could have found the missing three tenths of a second needed to challenge for pole.

That pushed Alonso down to a familiar fifth place while Raikkonen didn’t even get to do his final run after the team spotted a problem with his power unit and told him to stop.