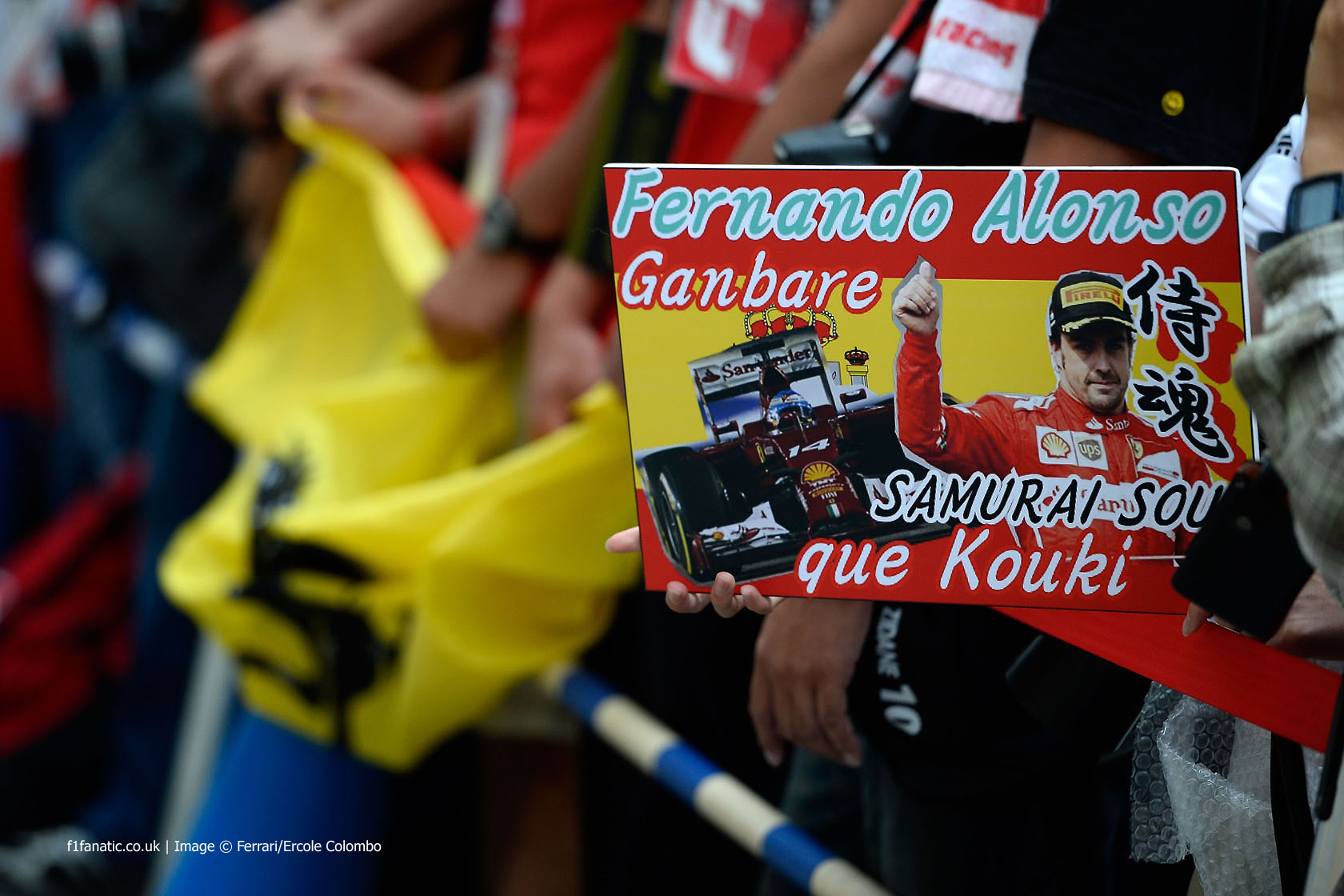 A series of spins and crashes during the two practice sessions showed Suzuka is tricky enough in dry conditions. But the impending arrival of Typhoon Phanfone remained a cause for concern on the first day of action in Japan.

It was far from the only talking point however. Fernando Alonso’s future remains very much in the spotlight – so much so that even such trivial matters as which team members he offered a bunch of grapes to did not pass without comment.

And Caterham team principal Manfredi Ravetto appeared to have done little to assuage concerns about his team’s financial situation after talking to the media.

Here are the Twitter highlights of an eventful day at Suzuka.

Three days after his 17th birthday, Max Verstappen became the youngest driver ever to take part in a grand prix weekend – two months younger than the television graphics said he was:

There he is, the youngest #F1 driver #Verstappen pic.twitter.com/l54XaydPtM

Button: "The cockpit's getting very hot by the way, especially on the right side." Was a problem for Magnussen in Singapore. #F1 #JapaneseGP

Fernando Alonso shares a bunch of grapes with his @InsideFerrari mechanics during FP1 #JapaneseGP #F1 pic.twitter.com/osGcunjYwi

Crazy that Jenson Button, Kimi Raikkonen and Fernando Alonso have now shared an F1 circuit with both Jos Verstappen and Max Verstappen

Button giving similar feedback to Magnussen. "Felt like I've got even more understeer in high-speed now." Gone up one turn on front wing.

And you know you're in a grand prix paradise when even the hotel entrance has a racing line… pic.twitter.com/wJrNjsjhmU

"No balance at all" reports Massa. #F1 #JapaneseGP

Verstappen’s session came to an end with a few minutes to spare.

Max Verstappen's debut #F1 session ends prematurely as smoke pours from the back of his @ToroRossoSpy car #JapaneseGP pic.twitter.com/Iz0KQCrfEr

Yellow in turn 6 with a @ToroRossoSpy on fire! What's the legal age for smoking?! #JapaneseGP #F1

Before his engine failed, 17-year-old @MaxVerstappen3 did 22 laps with no plagues of frogs or slaying of the first born. #hesyoungdealwithit

Good FP1. Love driving here in Suzuka, a drivers track! New front wing felt good. Although only used it on old tyres in the end #F12014 #ME9

Happy boy at the moment :) not bad speed at all :) pic.twitter.com/JmYaPryH7z

Really cool to see the response everywhere to @MaxVerstappen3 FP F1 debut. And impressive it was indeed! 👍

Reports say the FIA have no plans at this stage to hold the race on Saturday. We'll remind them of that when we're knee deep in water. #F1

The Japanese crowd did not see much of their hero today, as Kamui Kobayashi quickly crashed out of the afternoon session, while Roberto Merhi drove in his car in the morning.

Kamui Kobayashi loses the rear of his @CaterhamF1 CT05 and spins into the S Curve barriers #JapaneseGP #F1 pic.twitter.com/6ZdfD46Cap

Sebastian Vettel checked whether his team mate was alright after a crash similar to the season-ending one Timo Glock had had five years beforehand.

Some drivers were still having to be reminded their colleagues on the pit wall are no longer allowed to answer all of their questions:

Kvyat: "I think the rain is coming soon." Hamilton: "How was that first sector?" Bonnington: "Can't say, Lewis." #F1 #JapaneseGP

Bottas goes up to second, 0.8 off Hamilton who had a huge moment on his fast run. #F1 #JapaneseGP pic.twitter.com/DyHFjKVuRc

Vergne back on track, fishtailing out of the chicane under darkening skies. #F1 #JapaneseGP pic.twitter.com/JI2AvIpxXi

Car 25 stops for the third time today, more problems for Vergne, and the red flags are out again. #F1 #JapaneseGP pic.twitter.com/Vg9JMTSS29

A Caterham press conference left more questions than answers about the seriousness of the team’s financial troubles.

Ravetto: "I can't provide you with a guarantee we will survive the rest of the season." #ABCF1 #JapaneseGP #F1

Caterham's Ravetto insisted not "a single spanner had been taken". Later accepted a test car had gone, a simulator, Japan GP car parts…

Caterham press conference a frustrating experience of avoided questions and confusion. One thing for sure, the team's been left in a mess.

#F1 FIA says there will be no decision today if race will be moved forward. Saturday race is off the table. Start likely stays Sun 3 p.m.

As noted earlier Suzuka promoter Honda does not want a Saturday race, which could lead to refunds for Sunday tickets

What happens if you race on a proper old school track with less runoff? Driver errors get punished! See #f1 FP2 Suzuka!

Fascinating to see Marco Mattiacci and ALO's manager in a lengthy and animated conversation in the paddock. Must be talking about typhoon

The floor of the Red Bull, Adrian Newey won't like this shot #JapaneseGP pic.twitter.com/6d3pfoEZBJ