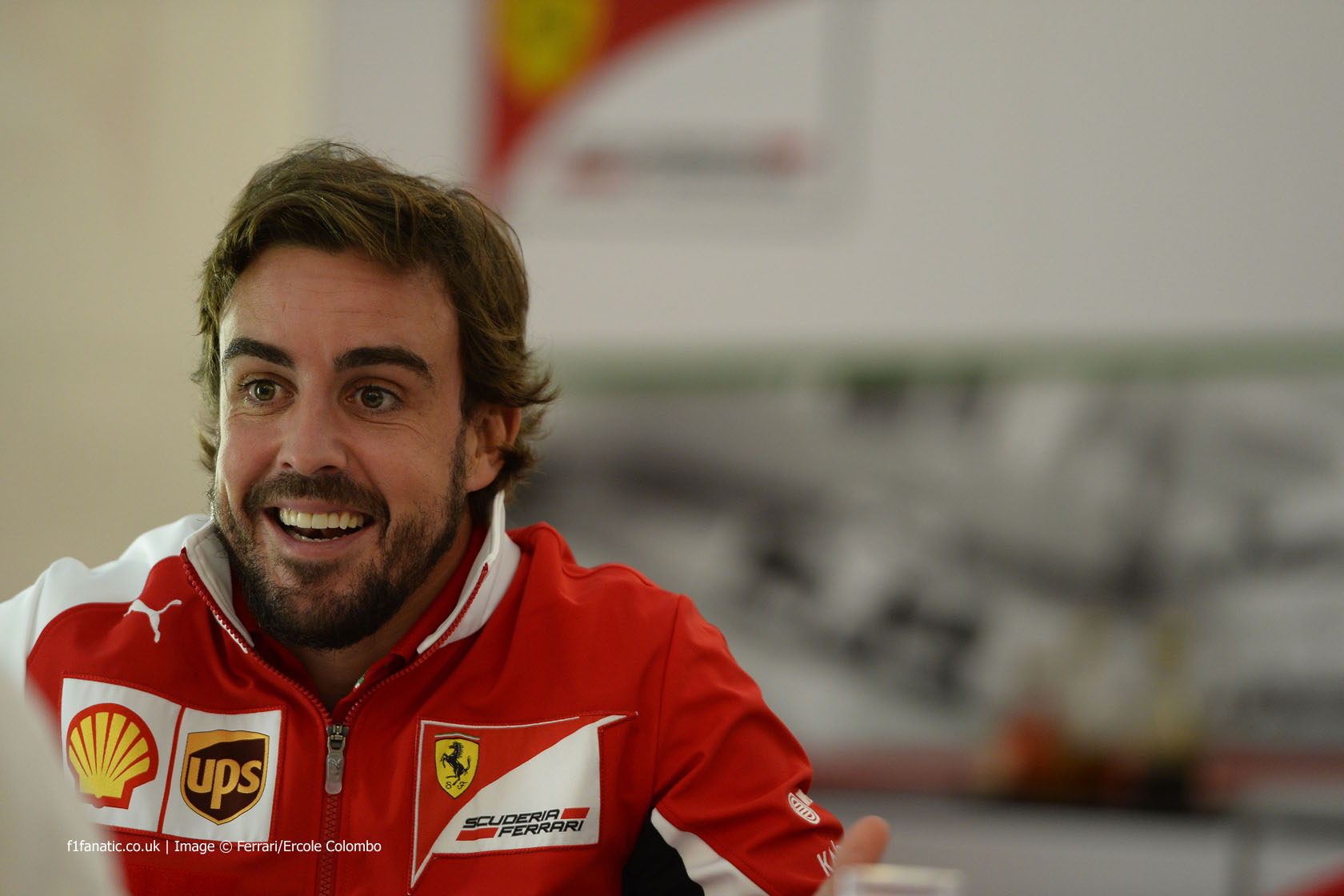 In the round-up: While Fernando Alonso does not deny he could leave Ferrari for a rival team next year, fresh rumours claim he will not see out his contract with the team.

“Fernando Alonso on Thursday refused to categorically rule out leaving current team Ferrari as soon as next season for either former outfit McLaren or reigning champions Red Bull.”

Italian journalist Leo Turini believes Alonso is on his way out of Ferrari.

Ferrari and Alonso heading for divorce – who will the Scuderia go for next? (James Allen on F1)

“The Spaniard has been told by the new Ferrari management that he can leave and well placed sources say that unless there is an 11th hour change of heart the clamorous split will happen.”

“Max Chilton is to step down so close pal Will Stevens can become Britain’s newest F1 ace in Japan on Friday.”

“At their regular Thursday meeting team managers were told that an early start on Sunday – it’s currently scheduled for 3pm – could create a bigger window in which to get the race run.” Red Bull’s chief mechanic Kenny Handkammer (pictured with Sebastian Vettel) has left the team since the last race at Singapore and is not with them in Japan, according to Bild.

Hamilton: This is my best F1 season (BBC)

“This has been the most consistent, best performing season I remember having.”

“Not at all [does it matter where he finishes on the timesheet] because for me this year I am just preparing for next year and I need to get experience of the new engine as it is a bit different than the last few years.”

“The Williams Formula One team has elected to change the steering assembly on Valtteri Bottas‘ car for the Japanese Grand Prix, following the problems that compromised him in Singapore.”

Japanese Grand Prix Betting: Rain Could Be A Gift For Red Bull in Suzuka (Unibet)

The Stevens deal has nothing to do with the bailiffs who raided Caterham's factory earlier this week.

Confusion over which rakes to fit for aero testing at the #JapaneseGP @AeroJRo pic.twitter.com/Y5RPI8OpVu

Have you ever just thought to yourself, 'I really wish I looked like Nigel Mansell'? Well, today is your lucky day… pic.twitter.com/6WFG3dWW70

Talked to @maxchilton about challenges of jet lag. Said before last year's Korea race he got just 90 minutes sleep. Ouch…

The Japanese fans couldn't be more polite if they tried. Love this race and the track. pic.twitter.com/DNGtS83pUK

@GT-Racer recalls a rain-lashed weekend at Suzuka ten years ago:

I remember been there in 2004 where all of the Saturday running was cancelled due to a typhoon threat which ultimately never materialized. Although the rain was bad enough that it was unlikely they could have driven in it anyway and it did flood parts of the TV paddock and damaged/destroyed several broadcasters TV equipment.

This is always a risk for racing in Japan, Many local categories regularly have races postponed/cancelled due to the weather because when it rains in Japan at certain points of the year it really rains and not even the best wet weather tyres can cope with it.

An additional problem with Suzuka is the undulation as that creates areas where rivers can form on the rises/falls and water can collect on the flat bits at the bottom of those and various different approaches to drainage over the years has failed to solve this problem.

One of the bad areas tends to be exiting the final chicane as the water flows down that very steep downhill right at the point where you need the most traction under acceleration and because the river tends to cross the track/racing line aquaplaning there is always a massive issue although the slow speed tends to limit problems to big slides/minor spins.

The biggest issue is in the middle of the Esses and through the exit on Dunlop just before Degner, a big puddle nearly always builds in those places and again aquaplaning is a massive issue but the higher speeds make it significantly more dangerous (See Morbidelli/Brundle in 1994).
@GT-Racer

Five years ago today Sebastian Vettel took pole position for the Japanese Grand Prix but a string of penalties for other drivers created confusion over the exact order of much of the rest of the grid.