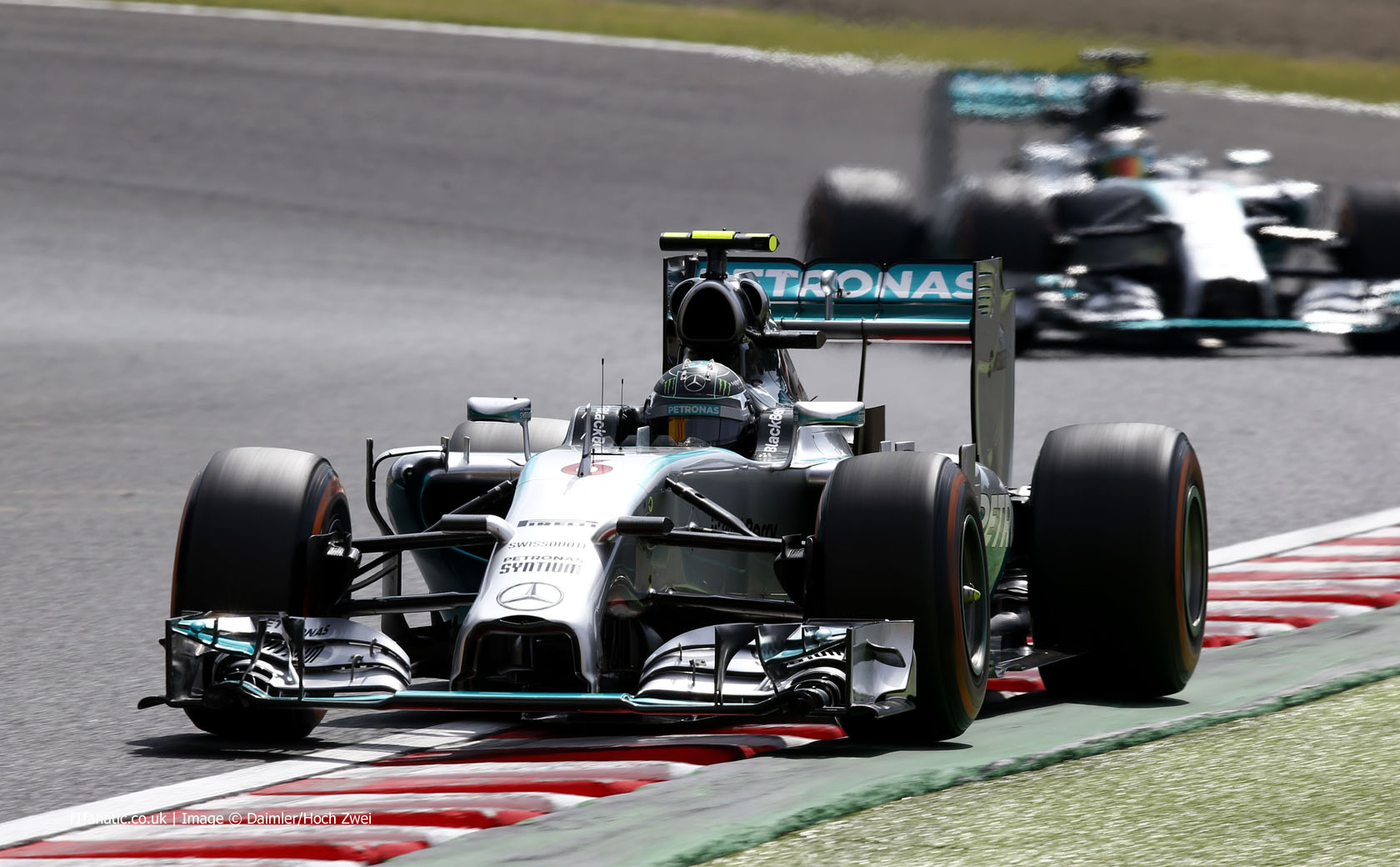 Nico Rosberg will start the Japanese Grand Prix from pole position after prevailing in a session-long battle with team mate Lewis Hamilton.

The two Mercedes drivers were very closely matched in the first two parts of qualifying. But when the final shoot-out began Rosberg revealed he had more time in hand and was quicker than Hamilton on both of their final runs.

Hamilton brushed off any after-effects from his crash in the final practice session by putting his Mercedes at the top of the times in the first part of qualifying, six-hundredths of a second faster than his team mate.

Q1 proceeded according to its usual pattern, although the Red Bull drivers fell close to the drop zone after deciding against using the softer tyres, to save them for the later stages.

Both Sauber drivers gained places in Q2 with their last run at the expense of the Lotus pair, who were separated by a few hundredths of a second.

Behind them Marcus Ericsson was best of the rest, pipping Jules Bianchi by a tenth of a second after the Marussia driver failed to get to the chequered flag in time to start his last lap. Kamui Kobayashi was another tenth of a second slower, his engineering complimenting him on his first run on the medium component.

There remained little to choose between the two Mercedes drivers in the second part of qualifying. The difference between the pair was just 0.032 seconds at the end of Q2, though this time Rosberg was the quicker of the two.

“I threw it away in the last corner,” rued Nico Hulkenberg after locking his brakes at the chicane. It left him on the rough end of a very tight scrap: team mate Sergio Perez was one hundredth of a second quicker, Daniil Kvyat separated the pair, and all three failed to reach Q3.

Kvyat, meanwhile, was frustrated by his rivals slowing in the final sector in preparation for their flying laps, saying it caused his engine’s anti-stall to cut in.

The finely-poised fight between Hamilton and Rosberg took a twist in Q3. Rosberg found a crucial margin in the middle part of the lap, and at the end of their first runs he held a useful margin of three tenths of a second over his team mate.

Behind them some drivers were becoming concerned about how traffic on their out-laps was affecting their running. The Red Bull drivers elected to begin their final laps first and Daniel Ricciardo was rewarded with a time improvement, although surprisingly he remained behind Fernando Alonso’s Ferrari as well as the Williams and Mercedes pair.

With his final run Hamilton recovered some of the lost time to Rosberg but remained two-tenths of a second slower than his team mate in the middle sector, where he locked his brakes at the hairpin.

Rosberg gained a few hundredths in the first and last sectors as well, and delivered his eighth pole position of the season by two tenths of a second over his team mate.

32 comments on “Rosberg beats Hamilton to pole position at Suzuka”