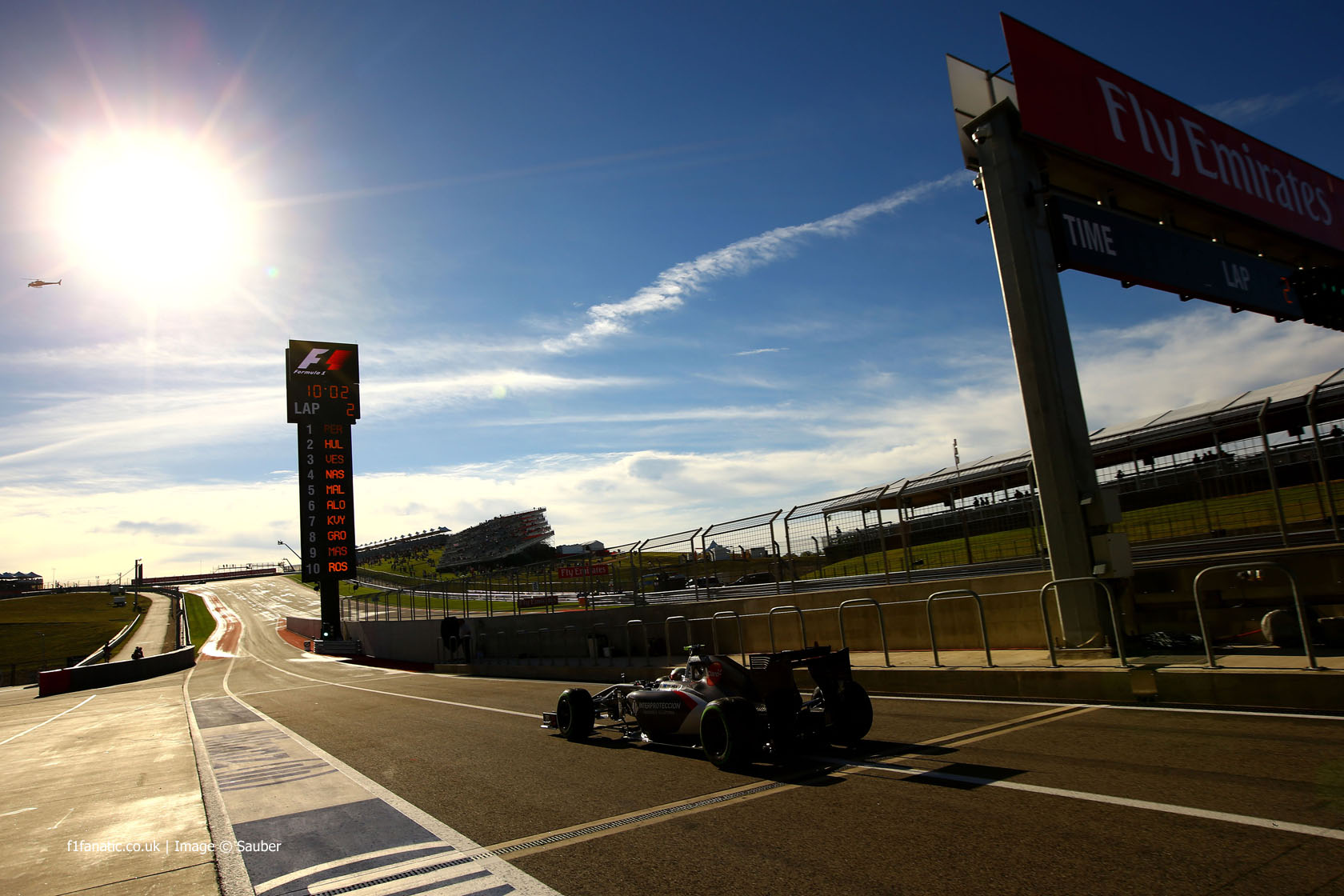 The possibility of a race boycott by Force India, Lotus and Sauber provided the main talking point of Saturday in Austin.

Following a series of meetings, by the end of the day Bernie Ecclestone believed the threat of a boycott had been averted, but suggested he was unsure how to solve F1’s financial crisis.

Meanwhile qualifying served up the best results of the season so far for Adrian Sutil and Pastor Maldonado.

Here’s how Saturday at the United States Grand Prix happened on Twitter.

Kvyat complains about his elbow again: "Can you continue running like that?" "Yeah I can but it's annoying." "OK we will fix it." #F1 #USGP

Rosberg says his braking problem "feels like a puncture". He suggests they stop to look at the problem more closely. #F1 #USGP

Hamilton went fastest in the first sector then spun at turn 12, looked much like his FP3 spin at Sochi. #F1 #USGP pic.twitter.com/C9t64p4qEr

Met some cool fans during my suite visit for @circuitamericas, now heading to the #LegendsClub for a quick meet&greet pic.twitter.com/3gCOZT7MbG

Time for qualifying, fair to say thoughts more on the potential for a boycott. Three rebels meeting later today – still on the table.

When Red Bull told Vettel he was having a complete power unit change, he must have hoped they meant to a Mercedes. #F1

Qualifying performance was irrelevant for Sebastian Vettel as he was on for a pit lane start anyway. Still, there was an unusual sight at the bottom of the times table at the end of Q1.

Hamilton: "It's getting a bit ridiculous but the thing keeps locking. I try to take it easy and it just locks." #F1 #USGP

Sauber made the final part of qualifying for the first time this season as Adrian Sutil took ninth on the grid.

As @MBrundleF1 says, SUT getting into Q3 kinda knocks thought of Sauber boycotting race on the head… #F1

Pastor Maldonado was another driver with their best qualifying result of the season, as he joins Sutil on row five of the grid.

Very much well done @Pastormaldo, we had potential for Q3, best qualy of the year, well done again….

"I've got time in my pocket" was an eye-catching line from Rosberg yesterday. And he delivered on that promise. #F1

If @InsideFerrari change @alo_oficial's gearbox, both their drivers will start from the clean side of the grid… http://t.co/zsx8N54C3c #F1

Rob Smedley: We came into this weekend expecting to have the 2nd fastest car & we have met our expectations by finishing 3rd & 4th

Here's DFF highlighted for those not used to these technical terms. pic.twitter.com/vdBOskagvU

Is this cameraman asleep, praying, working, hungover – or all of the above?! #F1 #USGP pic.twitter.com/GCQNJjKCRX

Three drivers asked about potential boycott. "No comment" the answer from all three. Pretty appalling really.

For an absence of doubt, we will be racing on Sunday. That's kinda why we're here. (We have have tweeted this statement once already)

Crisis averted? Big promises from Mr E to help stop the boycott threat at the US GP.

Despite Bob Fernley's remarks, we understand that there will be no race boycott. It appears to be sabre-rattling for whatever reason

Bernie on current F1 cash crisis: “Frankly, I know what’s wrong but don’t know how to fix it.

Bernie claims he is hamstrung by regulations and contracts with the teams. If he had his way he would rip up all contracts and start again

Mr E clear on U.S. GP boycott threat, though: "Forget all that crap. I promise you they will be racing. I give you an absolute guarantee."

@F1Photographer Not a given yet….Bernie says sport is in a mess and cannot fix it….#StickToPhotos

Historic day already as far as I am concerned. Bernie has offered to give up some of his F1 revenue if the leading teams will do the same