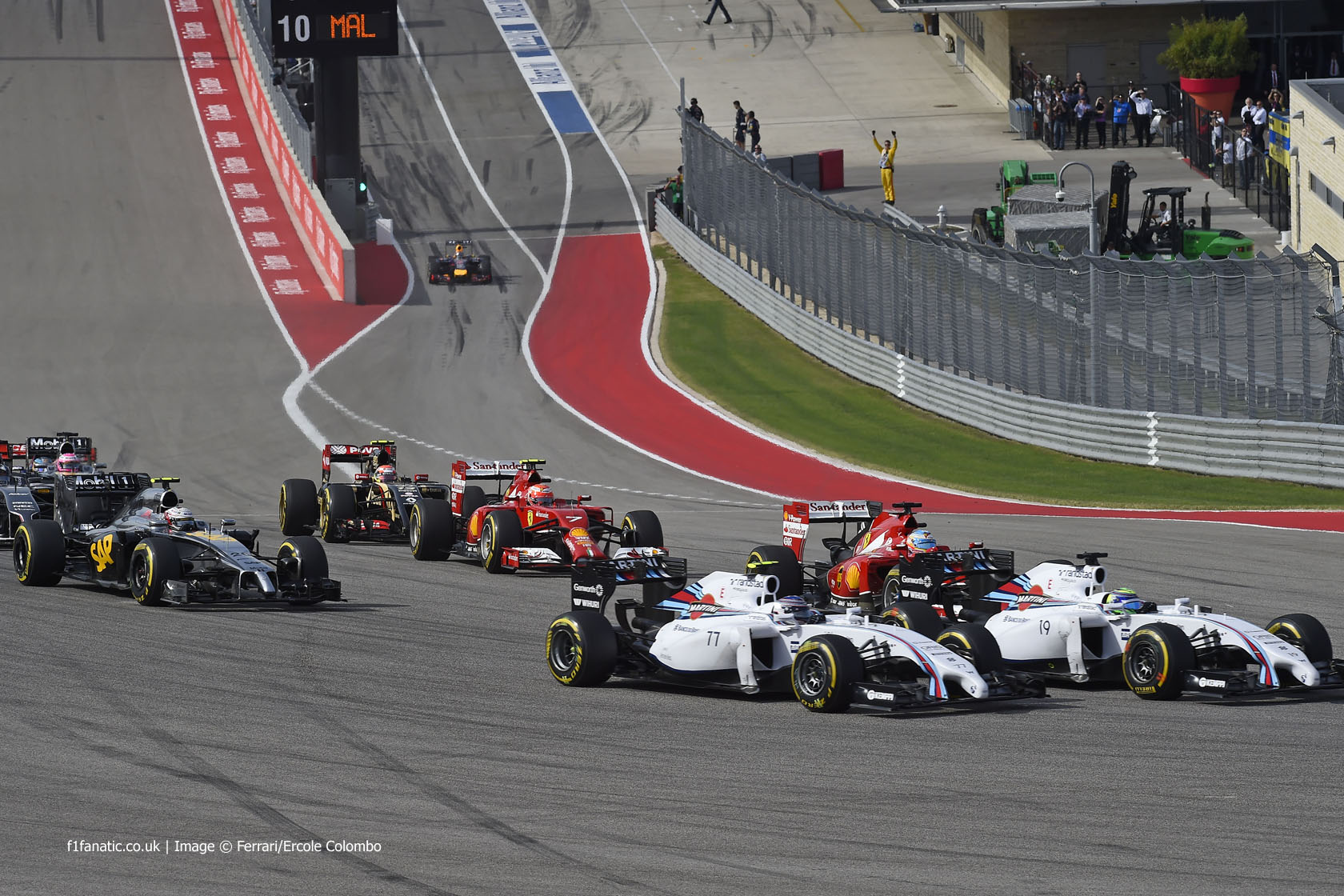 After a fraught build-up to the United States Grand Prix, a lively race and an enthusiastic crowd provided a welcome tonic for Formula One.

Serated screeen Rosberg's car, Hamilton's does not have the cut outs pic.twitter.com/d8vSBof83M

A rumoured boycott of the race by three teams dominated talk earlier in the weekend, but it was clear well before the start that it would not happen.

90 mins before #USGrandPrix and Force India, Lotus and Sauber call off threatened boycott of the race

It just wouldn't be a US sporting event without an accompanying marching band. @circuitamericas #USGP #F1 pic.twitter.com/ucNIg0uXRs

Look at the beast @danielricciardo has got for the drivers' parade today. Mega pic.twitter.com/eudLSvcULG

Since #F1 first raced at @CircuitAmericas two years ago the field has shrunk by 25%. A sorry sight. #USGP pic.twitter.com/u9LcLfFuCk

That said, great to see a healthy crowd for #F1's third race at @CircuitAmericas. Long may that continue. #USGP

Guests have a brilliant view of the race start from up here #USGP pic.twitter.com/lTjJgj1Hq2

A Force India hits a Sauber… is this a strange form of boycott? #F1 #USGP

There is a lot of debris on the track following that crash between Sutil and Perez, who have both retired #USGP #F1 pic.twitter.com/FCixXUlhJL

Schupbach: "Adrian, can you continue?" Sutil: "No, [censored by FOM] Perez just kicked me off the circuit." #F1 #USGP

McLaren mechanics were busy early on as both drivers pitted at the end of lap one, taking advantage of the Safety Car period.

The crew take their seats in the McLaren garage after a frantic start to the #USGP. Good work, guys.#Mobil1Insider pic.twitter.com/Dh4gLNidqg

After Sergio Perez’s crash, the other Force India of Nico Hulkenberg failed.

Force India's race done on lap 18. May as well have boycotted…

Breathtaking stuff at the front – big lunge from Hamilton, and Rosberg has to yield the lead of the #USGP #F1 pic.twitter.com/qx82rsnBB0

Anyone else get the feeling in the last few races that Jean-Eric is trying to fill out his CV with as many ballsy moves as possible?! #F1

Superb drive from HAM today, efficient when needed to be, pushed hard when required & executed the overtake perfectly. Big blow for ROS #F1

That was a terrific US Grand Prix. Battles right down the field and right to the flag. Just what was needed after the last few weeks.

Lots to learn for us from the race. 5th place not what I was targeting today.. But good points overall… http://t.co/dfcsZ3Z8gE

Massa: I had a good start to get up to 3rd & we showed strong pace throughout, but unfortunately a slow pitstop allowed Ricciardo to jump me

You fans made this weekend what it was. Thank you for coming to #COTA for the #USGP! We'll see you next year. pic.twitter.com/wEKs0SHtQY

Disapointing weekend in the end. Drive train issue forced us to stop. Good points were on the table as i was def on a good strategy! Shame!

Not the result we hoped for but we tried our best and fought hard till the end. Brazil in a few days. #BelieveInMcLaren