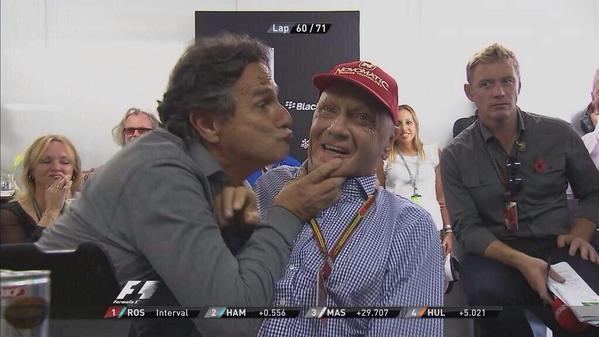 Three-times world champion Nelson Piquet conducted one of the more unusual podium ceremonies in Brazil, choosing to ask championship leader Lewis Hamilton about his girlfriend rather than the race.

However of more interest to the crowd was a podium appereance by home favourite Felipe Massa, despite an earlier gaffe when he pulled into the wrong pit box.

Here’s the Twitter story of Sunday at the Brazilian Grand Prix.

Race day in Brazil. Currently dry but rained overnight and more forecast. Will it arrive for the race? #BrazilGP #ForzaJules

We now know why @danielricciardo smiles so much… it's in a Honey badger's genes. pic.twitter.com/W44i6TM7vh

Time for some pre-race cake and birthday celebrations for @eboullier. Save us a slice, Eric. #BonAnniversaireEric pic.twitter.com/yZ6viFV8pG

Valtteri Bottas strapped into his car before the race. The seat belts later caused him some problems as he needed assistance during his second pit stop.

There had been a chance rain would affect the race, but it never arrived on what turned out to be a sunny Sunday.

Unfortunately, Adrian has to start from the pitlane as we made a small technical change to the C33 #AS99 #F1 #BrazilGP

Lewis Hamilton had a spin at Interlagos’ turn four, the corner he’s all too familiar with after his 2007 and 2013 adventures.

Wow! Not often you see @LewisHamilton crack under pressure

Massa eventually finds us and switches to another set of primes! too many mechanics in white! pic.twitter.com/eufzrzfSrH

Massa became the fourth driver in five years to go to another team’s pit box.

We're boycotting the final five laps of this race with @rgrosjean

Really solid job from Nico under immense pressure this weekend, if Lewis had got past it would've destroyed him mentally. #F1

Crowds go wild!!!! And the garage!! Massa on the podium at the #BrazilGP!

Nice to see a couple of Ferrari guys under the podium for MAS.

Sebastian Vettel lost two places on lap one. He was cautious because of a previous incident that nearly cost him the 2012 championship.

Nelson Piquet always loved a good looking woman but was so fascinated by Lewis's he forgot the race. time for podium celebrity chat to end?

Nelson Piquet chooses the podium to tell Lewis Hamilton he is jealous of his girlfriend. Then doesn't ask him a question… Hilarious!

Good to see Nelson Piquet hasn't lost his ability to completely creep everyone out :)

Bernie WANTs 'celebrity' interviews, FOM wanted to use proper journalists…an example of why FOM should use someone to ask actual questions

I think we can all lip-read what @nico_rosberg's verdict on that podium ceremony was! #F1 #BrazilGP

Jack Nicholson and I pulled off a reasonable photobomb. pic.twitter.com/GIUBEmKK1Z

Can Hamilton and Rosberg not be fined for bringing sport into disrepute completely ignoring each other and looking miserable after race??

Great result for @JensonButton in fourth. Fired another timely reminder to Ron. Magnussen was ninth.

Unbelievable noise here at Interlagos – we can STILL hear the crowd chanting from inside the press conference. Epic! #F1 #BrazilGP

A very popular man in Brazil tonight @MassaFelipe19! What a reaction from the crowd! #BrazilGP #F1 pic.twitter.com/In2rjlnTWQ

#Massa is greeted by his family as he returns to the paddock #BrazilGP after his podium. pic.twitter.com/wMBLzSilxL

A day to forget. Surely lots to learn from as well. Now back to Woking to find out where we lost out. #NeverGiveUp

And no, our fastest stop wasn't Felipe Massa's that we took part in. Always happy to help though 😄 #BrazilGP

Even if today wasn't what we wanted we can still take some positives. My first dnf since round 2. So we had a pretty good run of points!

..@redbullracing sealed 2nd in points & I sealed 3rd in drivers. A great recovery from pre season so a lot to be proud of for the whole team