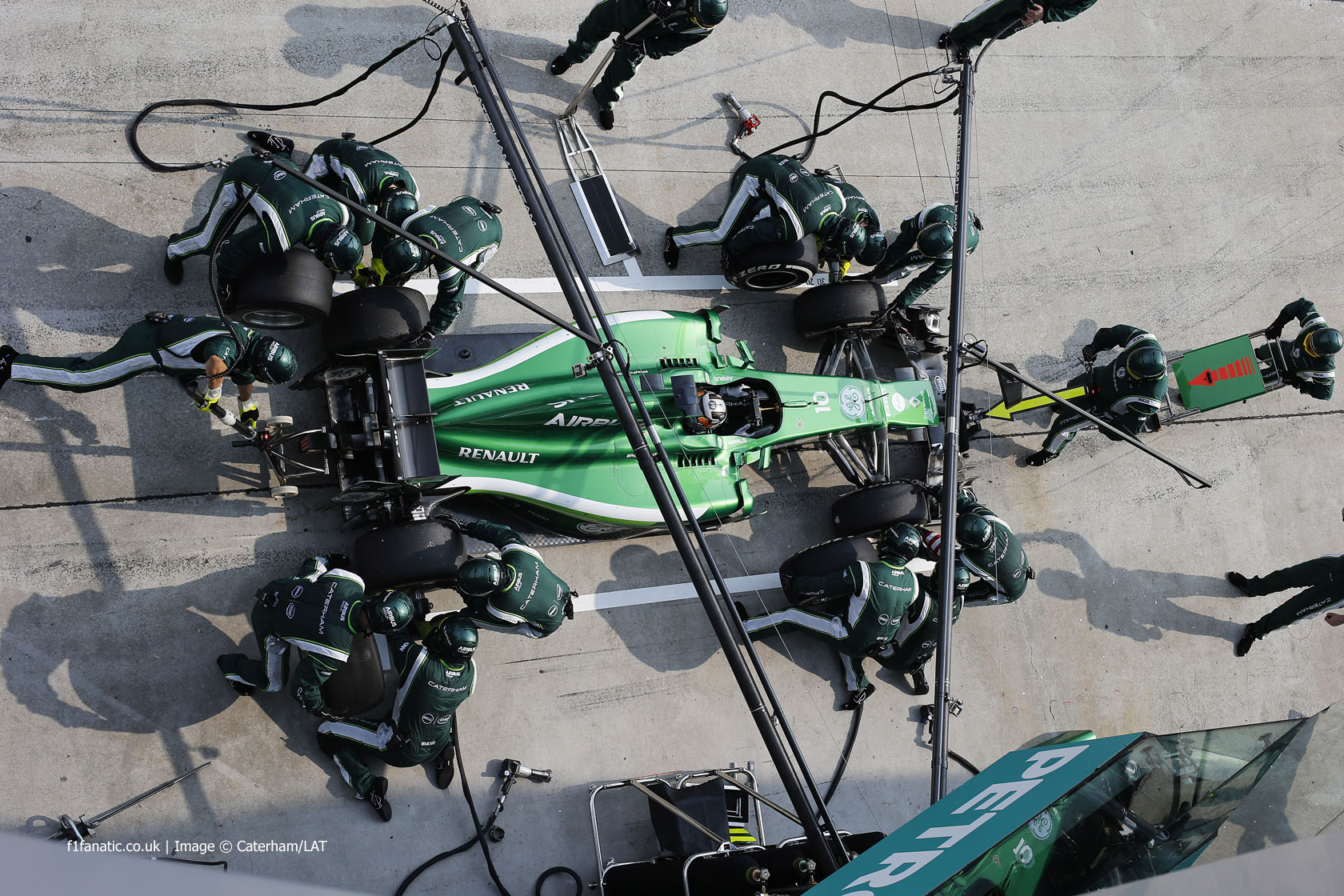 In the round-up: Caterham have laid off the bulk of their staff despite announcing their crowdfunding initiative had enabled them to participate in the last race of the season.

“Caterham made their 230-strong race team redundant on the very day they announced they were going to go to Abu Dhabi for the last Formula One race of the season on Sunday.”

“Caterham wants me to race in Abu Dhabi but I am not sure if I will take up the offer.”

“You ask yourself, ‘What has this to do with racing? But what is the alternative? Yes the cars have become slower, but they are still the fastest you can race.”

“Race pace for example wasn’t an easy [lesson to learn] one because it’s a lot longer race than it is in GP3 and takes some time to have full control of the race pace. These were things that came more together during the year. They had to come together, at the beginning it was a little bit harder but I managed better and better, so I would highlight this one.”

Karun Chandhok: “Formula E is absolutely not intended to supplant F1. It doesn’t compare with F1, Indycars or Le Mans, and that’s far from its purpose. It’s totally different.”

What’s a hot lap with Kimi Raikkonen in a Ferrari F12 really like? (Auto Express via YouTube)

Thanks to @Jaanusl for the tip!

Jules, every day for one or another reason I remember you, and I send you strength. All that I have. #ForzaJules pic.twitter.com/SawBeHKqhk

Bernie Ecclestone has generated a storm of attention recently with his comments on the future of the sport, young fans, double points and more. But is there a method behind the apparent madness?

Although my personal opinion on Bernie has been wavering lately I have generally been a supporter of his. Sometimes you have to look at the wider implications and pressures on the decisions he makes, and what his public comments are (often two different things). His role is so diverse and encompassing that his main mission must often get lost in the storm of controversy that perpetually surrounds F1.

However with the exception of safety his overriding focus has to be on maintaining the global profile of F1. Many criticize his methods, his courting of the corporate machines, his sometimes zany ideas. But sometimes we have to remember that a calm, settled, and non-controversial F1 attracts fewer articles and less column inches.

I’m of the same belief as some others here, Bernie is up to something, I can’t believe the the ring master has suddenly lost all sense. If you take his public comments just on face value then surely CVC would have done something about this sooner. Bernie has a plan!
@Bigbadderboom

The Caption Competition winner will be chosen tomorrow so you still have 24 hours to join in here:

Happy birthday to Craig and Cduk_Mugello!

Five years ago today Mercedes confirmed their return to Formula One as a full constructor by taking over reigning champions Brawn GP: