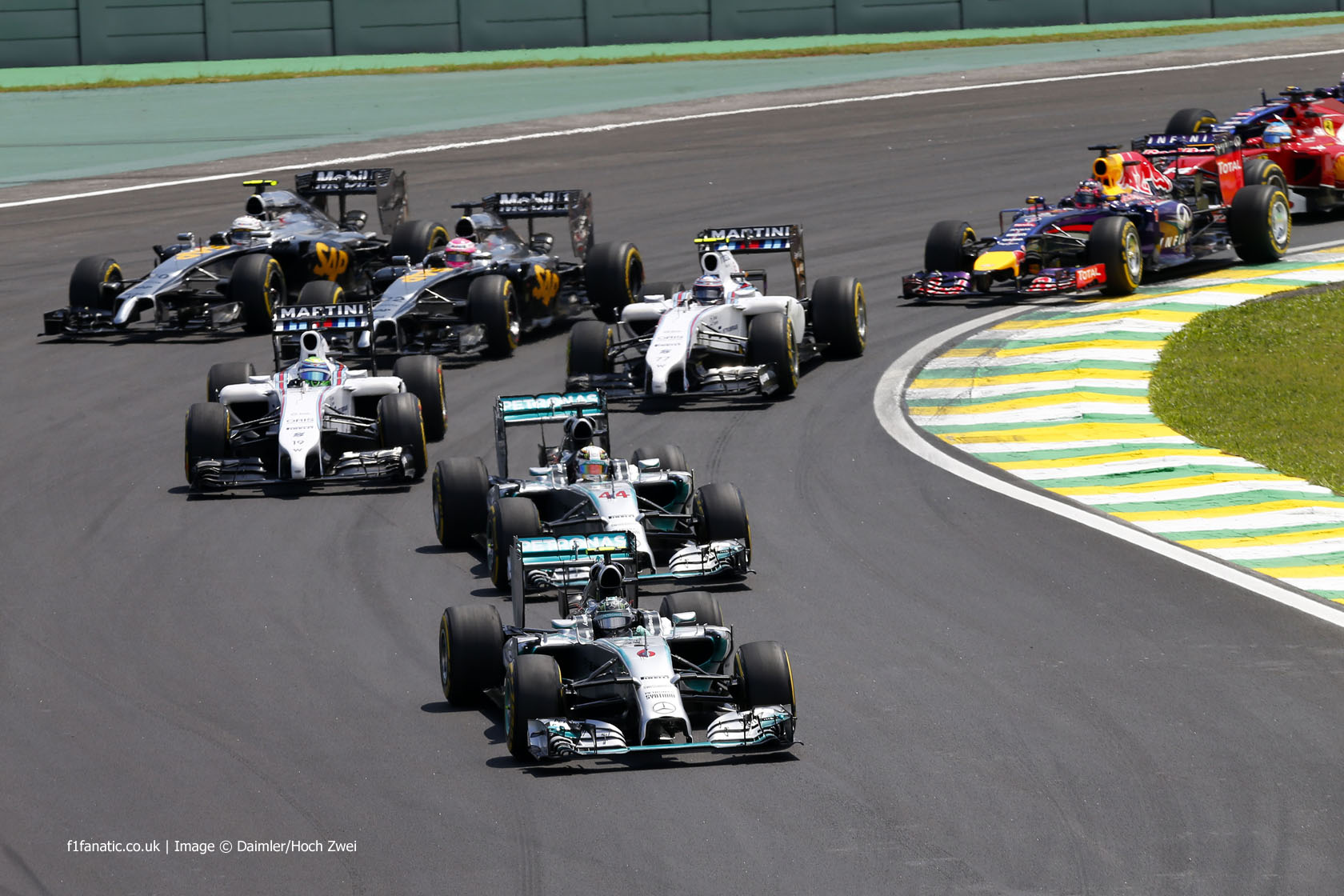 The atmospheric Interlagos circuit makes the Brazilian Grand Prix a consistent fan favourite and this year was no different.

Although the threatened rain never materialised the Mercedes drivers provided another close battle for victory. Further back there were some good scraps for positions, partly aided by drivers encountering problems in the pits and emerging lower down the running order.

Mercedes achieved their record-breaking eleventh one-two finish of the season, headed by Nico Rosberg after Lewis Hamilton spun off the track late in the race. Although Hamilton closed on Rosberg in the final stint he didn’t get close enough to make a pass and the championship situation gave him little incentive to risk anything.

F1 Fanatic readers rated the race 7.2 out of ten, a fairly average score both for this race and for the season so far.

With one round remaining, 2014 has been a well-received season on the whole, and Brazil was another race which scored well.

Really enjoyed this weekend. Rosberg delivered a drive worthy of a champion. Hamilton was relentless throughout the race, watching him claw ever closer to his rival was riveting. Raikkonen was simply marvellous, scrapping with Button and Alonso. Massa battled through several difficulties (including a hilarious pit stop) to a well-deserved third. Interlagos usually serves up exciting races, and this was no exception.
@Thegrapeunwashed

Good tension and battles throughout, some surprises (no Bottas or Ricciardo being factors), excellent race by Rosberg. Overall, a fitting penultimate championship round leaving for a dramatic conclusion in two weeks. Not a classic, but a good one.
@Drvoo

And what was that Bernie Ecclestone was saying about only being interested in older fans?

Watched the race with my parents who are completely out of love with F1 right now; there wasn’t much reaction from them at all this race.

Still, I rather enjoyed it. There was a good battle for the lead and plenty of ‘will he or won’t he’ concerning Hamilton. The battle throughout the field was interesting, as were the strategies. I gave it an eight, a race I could very well enjoy multiple times.
@Npf1 This was the second race in which F1 fielded a depleted field of just 18 cars, which continued to draw comment from fans. However Caterham has said it will return in Abu Dhabi.

A race of Formula One, “the pinnacle of motorsport” only with 18 cars? Godfather Ecclestone and his bankers are killing the sport.
@Jorge-lardone

I don’t know why, but since Marussia and Caterham dropped out, my view hasn’t been the same. It’s really hard to say why, as you don’t see them so much on the TV anyway, but I just couldn’t enjoy the race.

I guess the Mercedes dominance has slowly but surely faded my interest to an absolute low, which I’m struggling to get out of. I can only hope 2015 will bring it back up.
@Rigi

I think my voting is being swayed by the lack of Marussia and Caterham. I’m watching it and it just doesn’t feel right. Here and Austin just felt empty with 18 cars. It is a pitiful number. I’m trying to enjoy it but the current state of this sport is really making it difficult to enjoy.
@Deej92

Objectively, it had everything a race needs to have. A close battle for the lead, different strategies and a fair amount of overtaking. It was way above the 2013 standard or those horribly dull Bridgestone years, but we’ve gotten used to that.

Still, it didn’t excite me over the moon. Maybe it’s because of all the negativity overshadowing the action on the track. Or the lack of cars involved therein. 18 isn’t the new 22, it’s a mutilated grid.
@Nase

The shadow of double points

Brazil was the last ‘normal points’ race of the season before the double points finale at Abu Dhabi. This created an unusual situation in which the drivers’ championship couldn’t be decided at the penultimate race, which some felt detracted from the action in Brazil:

The race would have been much, much, much more thrilling if we wouldn’t have the double points.

If we didn’t have these, the battle between Rosberg and Hamilton would have been very interesting of course, because Hamilton could have won the title had he won the race. I personally thought Rosberg wouldn’t be able to resist, but he did, and for more than 20 laps at the end.

There were also interesting battles behind, like the battle between Raikkonen and Alonso and earlier with Button.
@Dan_the_mclaren_fan

Would Hamilton have fought harder to win if Abu Dhabi would be single points, and try to clinch the title here, rather than risking all with a DNF next race?
@Coldfly

Although it didn’t affect the race, Nelson Piquet supplied fresh ammunition for critics of the current podium ceremony as he seemed more interesting in Lewis Hamilton’s romantic life than the race he had just completed.

Piquet was so disrespectful of Rosberg and Hamilton during the podium interviews. For him to ask Hamilton about Nicole Scherzinger was so brazen and had Hamilton taken aback, he did not even know how to react. Terrible, terrible display.
@Svianna

Again the podium interviews conducted by someone that isn’t an interviewer left a lot to be desired. With the championship down to the wire, with only one race to go, after a fantastic battle, it would have been brilliant to get some real insight from the drivers, but no, Piquet made a total mess of it.

He managed to creep everyone out by just Hamilton Lewis he’s jealous of his girlfriend, and leaving him there alone with nothing to say until someone obviously told him ‘you forgot to ask Hamilton something’ and came back after Massa to just go: ‘tell us about the race’.

Horrible. Even worse than Placido Domingo a couple of years ago. Being a legend in motorsport doesn’t mean you can show up and do a good job interviewing others. Some can (Brundle, Herbert, Hill, Coulthard, Webber, Stewarty), others simply can’t. Piquet is a prime example.
@Fer-no65