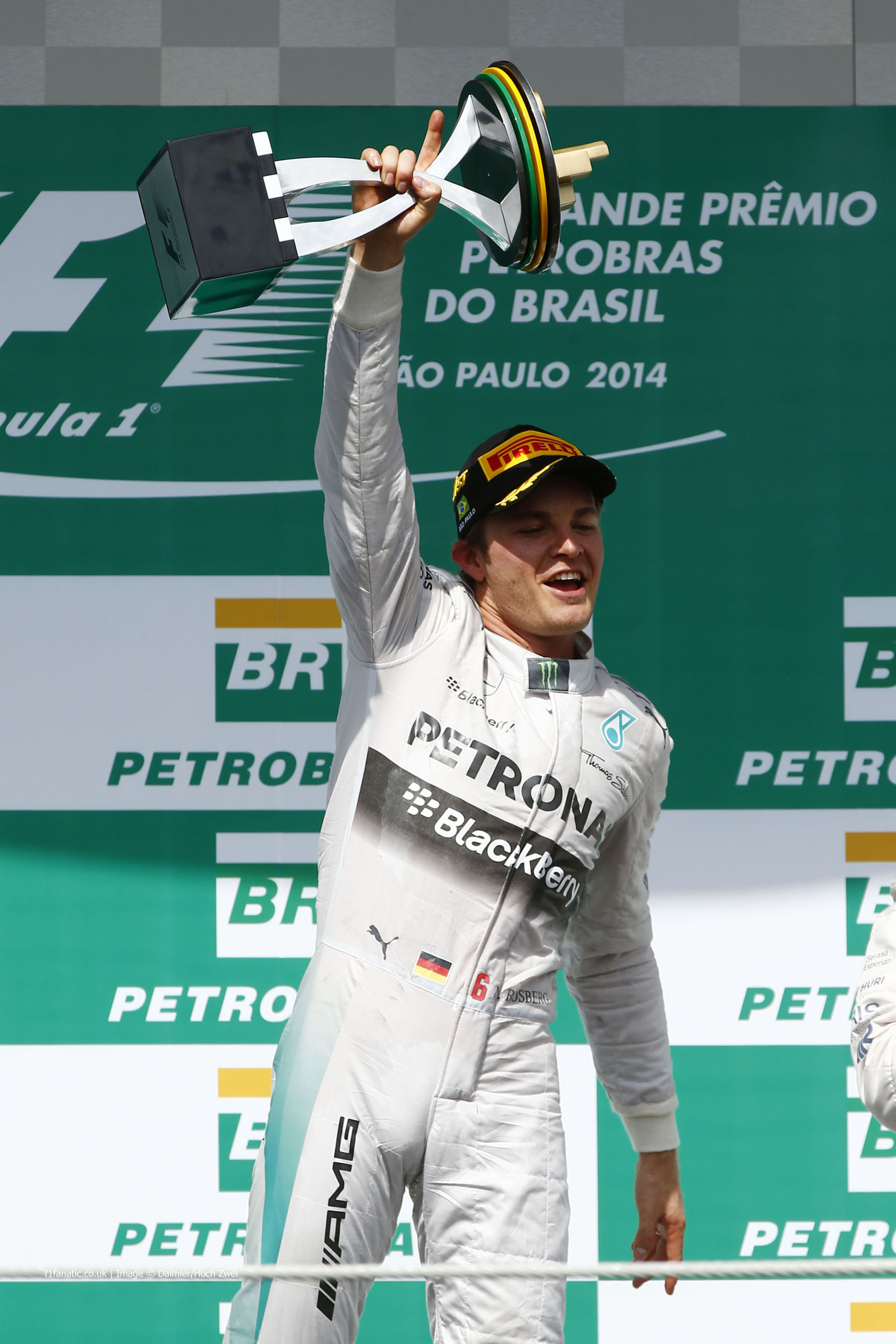 Despite having won five races and led the championship for most of the year, Brazil marked the first time in 2014 that Nico Rosberg was voted Driver of the Weekend.

His performance over the weekend was hard to fault: he topped every session in practice and qualifying and resisted strong pressure from team mate Lewis Hamilton to take an important win and keep his championship hopes alive. With over half the vote, Rosberg was the most emphatic Driver of the Weekend winner since Jules Bianchi scored Marussia’s first points in Monaco.

Jenson Button was voted second in the poll following his strong run to fourth in an ever-improving McLaren – doing just what he needs to do to show the team he deserves to keep his seat.

After a somewhat troubled run to the podium in front of his home fans, Felipe Massa, marking his first appearance in the top three of the vote all season.

Rosberg had to deliver in Brazil following Hamilton’s five consecutive wins – two of which Rosberg had been on pole for.

He started out well by topping all three practice sessions although qualifying looked like being a closer contest, as both Hamilton and the Williams of Massa found some speed. Rosberg had enough in his pocket however and took his tenth pole position of the season – claiming the rather pointless pole position trophy with it.

From pole he got the start he needed to hold Hamilton at bay, and quickly pulled a gap, although Hamilton reeled him back in as they approached the second round of pit stops. As with the first stops Rosberg pitted first, allowing Hamilton his ‘hammer-time’, although this would ultimately prove his demise.

Engineer Tony Ross’s words “the other car has made a mistake” was music to Rosberg’s ears. Once Hamilton pitted, Rosberg had a comfortable seven-second gap.

For the second time in the race Hamilton reeled his team mate back in, but unlike Japan and the United States, Rosberg managed to keep him at bay and take his first win since Germany back in July, drawing praise even from Hamilton supporters.

Unambiguously Rosberg. Led every session in the whole weekend and didn’t spin anywhere on the circuit. A very Hamilton-esque performance!
Sumedh

I voted Rosberg, in spite of not being his biggest fan. I did so because, had it been Hamilton in his place, he would have had my vote.
@Drmouse

Rosberg, one of the easier votes this season and long overdue!
@Psynrg

As in Russia, the McLaren looked strong in Brazil from the first practice session, and throughout the weekend Button maximised this to great effect.

A strong effort on Saturday saw him bested by only the Mercedes and the Williams cars, and despite not being too confident on race pace, Button stuck with the latter through the opening stint.

He passed Bottas when the Finn suffered a slow pit stop to re-tighten his seatbelts and with a 5-second stop-go penalty looming for Massa, he was in with a shout of third, although he missed the chance by pitting one lap too late.

I believe Button in a car that isn’t great drove, once again, a car to a place it shouldn’t be.
@Broke84

Agree, Button all the way… Challenged for a podium in the McLaren, beat his team mate by 21 seconds and 4 places. Deserving of a seat at any top team, still has it.
@Abbinator

Massa pipped his team mate to third on Saturday – although arguably threw away a chance at a front row start with two lock-ups on his final lap.

After Bottas fell out of contention early on with his seatbelt problem, Massa looked set for an easy run to third. By speeding in the pit lane and then stopping in the wrong pit box on a later visit, he made it a little more difficult than it should have been

Went with Massa, because he not only scored a podium, he was the quickest Williams in qualifying and the race. That involved beating a driver I consider streets ahead of him, so credit where it’s due.
@Neilosjames