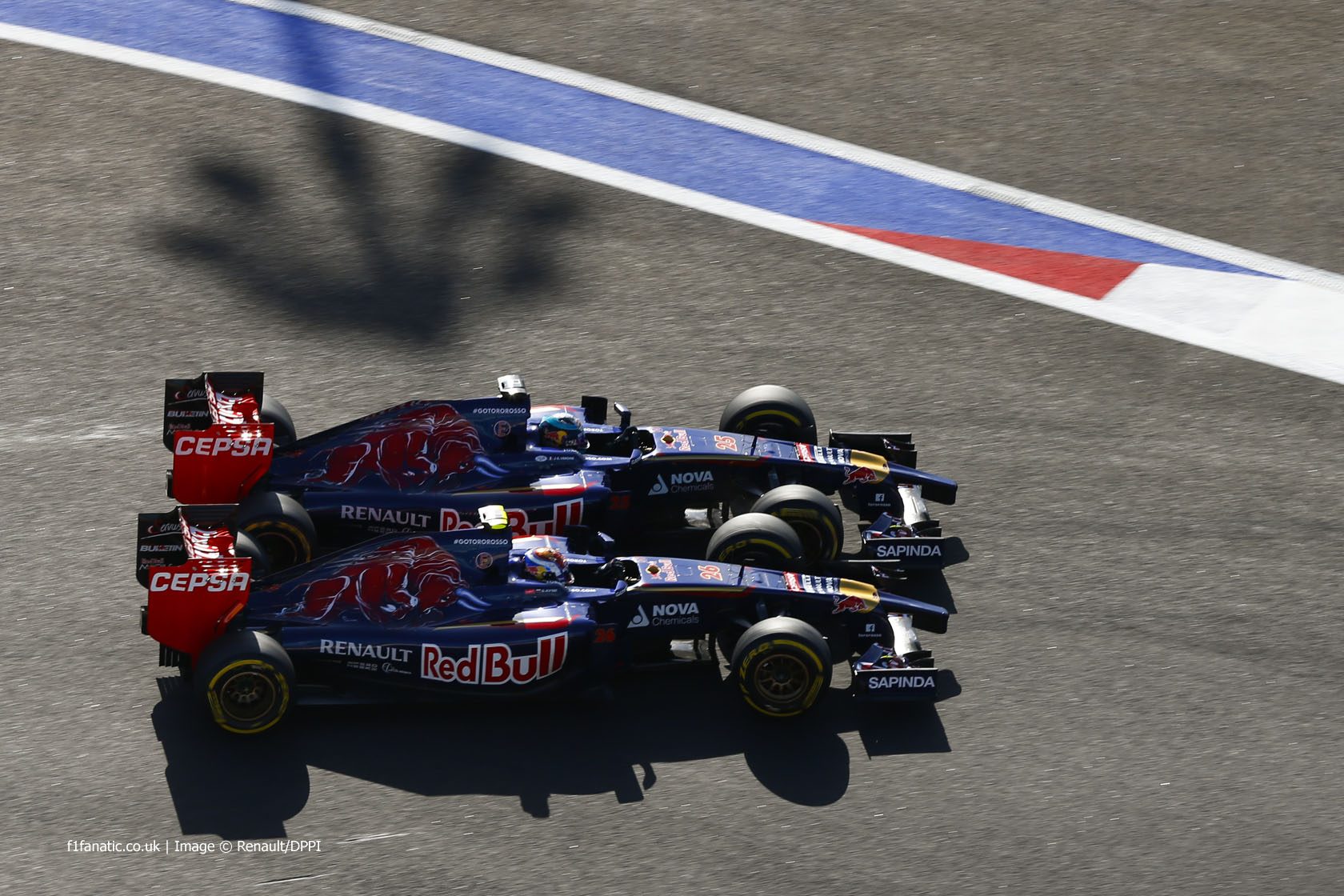 While independent outfits like Marussia and Caterham are increasingly priced out of Formula One, teams like Toro Rosso are considered by some to be the future for the sport’s midfield: satellite outfits to the rich and heavily subsidised teams, which serve to hothouse young talent for them.

If that is the way the sport is heading, Toro Rosso serve as a model for how these teams may promote new drivers. This year, Red Bull’s tenth season in F1, was the first time both their cars were occupied by graduates of their young driver programme. And when Sebastian Vettel decided he would move to Ferrari the team did not hesitate to promote from their junior squad once again.

But the timing of Vettel’s announcement in October proved unfortunate for Toro Rosso. In August the team decided to promote Max Verstappen – a 17-year-old with less than a year’s racing experience – to F1 in 2015. He would take the place of Jean-Eric Vergne alongside Daniil Kvyat.

Vettel’s departure then meant Kvyat was gone, leaving Toro Rosso with one rookie and one empty seat for next year. Although they appear to have considered it, eventually decided not to go back on their earlier decision to drop Vergne, and instead chose to appoint Carlos Sainz Jnr.

This was to Vergne’s considerable chagrin, who not unreasonably pointed out he had taken 22 points to Kvyat’s 9 by the end of the season. Significantly, however, at the time Toro Rosso chose to drop him the gap between the two was much closer. The bulk of Vergne’s subsequent points haul came in Singapore, where a Safety Car and a late switch to soft tyres brought a big pay-off, while Kvyat ended the race in a bad way having driven for two hours in suffocating humidity without a drinks bottle.

Even so, it must have been a close decision which driver to promote, particularly in light of the handicap Vergne had at the beginning of the season when his car was over the minimum weight limit, owing to him being taller than most drivers. It’s not hard to find reasons why Franz Tost considers him the best Toro Rosso driver not to get a seat at Red Bull.

Vergne’s clearest weakness is his qualifying pace. Even in an era where overtaking is less of a challenge due to DRS and designed-to-degrade tyres, securing the best possible grid position remains a vital skill for a driver. Having been emphatically beaten by Daniel Ricciardo in 2012 and 2013 Vergne also lost to his rookie team mate this year. Although rearing young drivers is Toro Rosso’s primary concern rather than championship success, it will be a source of pride for them that having switched to Renault engines this year they finished the season ahead of two teams with the same equipment. That Toro Rosso would beat Caterham was to be expected, but claiming the scalp of Lotus was a bonus.

The STR9, Toro Rosso’s first design from the pen of James Key, showed a good turn of speed, too. But while it reached Q3 on 16 occasions – four more than Force India managed – Toro Rosso ended the year 125 points behind the cars from Silverstone. The reason for that can be summed up in one word: unreliability.

As was the case for most Renault-powered teams, testing threw up “major problems”. On one day in Jerez the car never even left the pit lane. It was therefore quite a surprise when the team turned up at the first race in Australia and got both cars in the top ten in qualifying and the race.

But thereafter they were plagued by problems. The car’s exhaust was a recurring source of difficulty, and Vergne especially suffered in the opening races. Making matters worse, he was hit by Pastor Maldonado in Bahrain, had a grid penalty in Spain after a wheel fell off in practice, and his Monaco run was ruined when he was released from the pits too soon.

Meanwhile the impressive Kvyat scored in three of his first four appearances, which included reaching Q3 on the first occasion he’s driven the STR9 in the rain. But while Vergne went over his power unit allocation once, Kvyat did so on two occasions, leading to a trio of grid penalties due to the FIA’s ‘carry-over’ rule (which has already been scrapped for next year). This included at Monza, where he superbly raced back to the outskirts of the points following his ten-place penalty, only to suffer brake failure.

On other occasions the team simply couldn’t get the car to work as well over a race stint as it did in qualifying. Russia was the most glaring example of this: Kvyat produced the team’s best qualifying performance of the year with fifth, but both finished out of the points as they struggled with their rear tyres and high fuel consumption.

Kvyat inherited another fifth on the grid in Abu Dhabi and was on course for points once again when he was halted by an ignition problem. As well as introducing two rookies to Formula One, ‘improve reliability’ will be high on this team’s to-do list for the off-season.