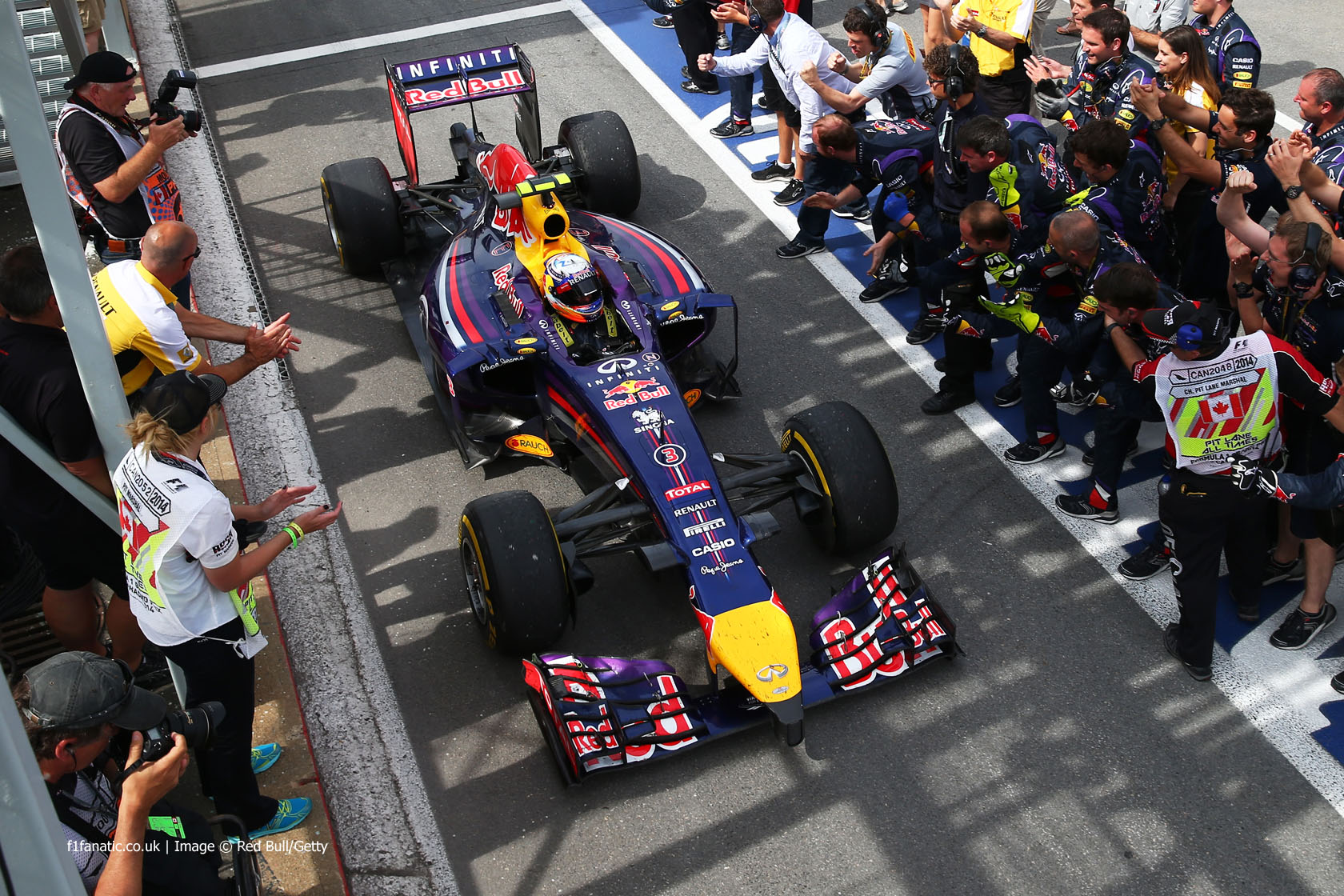 Key stat: The only driver besides Rosberg to reach Q3 at every round

In his first season with Red Bull, Daniel Ricciardo defied the expectations many had of him before the year began. But that’s not why he’s F1 Fanatic’s top driver of 2014.

Ricciardo was the best driver of the year because he consistently qualified strongly, raced even better, and made very few mistakes. And, of course, because he emphatically beat his four-times world champion team mate.

Behind the runaway Mercedes the field was closely packed, yet Ricciardo broke free and sealed third place in the championship before the final race. And that was despite the last race being worth double points, and Ricciardo having lost 18 due to a technical infringement by the team in Australia.

The transition from a midfield team to a top outfit is one many drivers have struggled with before – just look at Sergio Perez last year. For Ricciardo it initially seemed that, like Perez before him, he had made a mis-timed move to a team which produced the quickest car the year before only to find their new model was out of contention for victories.

That later proved not to be the case. But only in Ricciardo’s hands did the RB10 become a race winner – and on no fewer than three occasions. Of course those opportunities all arose because of misfortune or mistakes on the part of Mercedes. But it was never going to happen any other way for Ricciardo or any of his rivals in 2014.

What was significant was that Ricciardo monopolised those opportunities. In Canada he jumped Vettel by pitting a lap later than him and unleashing his pace, then sprang a superb pass on Perez for second place before picking off the struggling Nico Rosberg.

An error-free run in Belgium, while Vettel went off twice of his own accord, allowed him to win after the Mercedes pair tangled. His Hungary win owed something to good fortune when the Safety Car came out, but he still had to make it happen and a brilliant around-the outside pass on Hamilton put him on course for another victory.

All of Ricciardo’s top rivals fell prey to his attacks at one time or another this year. His feint-and-lunge move on Vettel at Monza was another highlight, as was his disciplined duel with Fernando Alonso at the Hockenheimring. No other driver consistently impressed in wheel-to-wheel combat the way Ricciardo did.

Following the disappointment of Australia it took a couple of races for Ricciardo’s season to get back on track. An error by the team in the pits compromised his race in Malaysia and had a knock-on effect in Bahrain, where he had a grid penalty. Next time out in Spain he made his first of eight official podium appearances, during which time he also racked up 15 consecutive points finishes.

There are still areas of Ricciardo’s game where improvements can be made. His starts were a particular weakness, though he often managed to get the car back where it belonged by the end of the race, such as at the Circuit of the Americas.

Similarly in Germany he was delayed by the a collision involving some of his rivals at the start, but having fallen to fifteenth he made his way back up to fifth by the flag. The RB10 may have been a bit gutless on the straights, but time and again Ricciardo made passes work by using its downforce to exploit parts of the track his rivals could touch, and being very bold on the brakes.

The season ended with both Red Bull drivers starting from the pits in Abu Dhabi. Vettel came home eighth, while Ricciardo finished four places higher and well over half a minute ahead. It was the latest in a series of occasions in which an uninformed observer might have mistaken Ricciardo for Red Bull’s four-times champion. Given suitable equipment in the future, Ricciardo is certainly capable of winning titles of his own.

I wish I had something sensible to say, but I’ve never been as wrong about a driver as I’ve been about Ricciardo; I rated him considerably lower than Vergne and didn’t expect much of him at all.
Nick (@Npf1)

How the rankings are produced

All the data I refer to while producing the rankings can be found on the site. They include notes on each driver’s performance at each race weekend, compiled data on car performance, direct comparisons between team mates and each driver’s form guide.