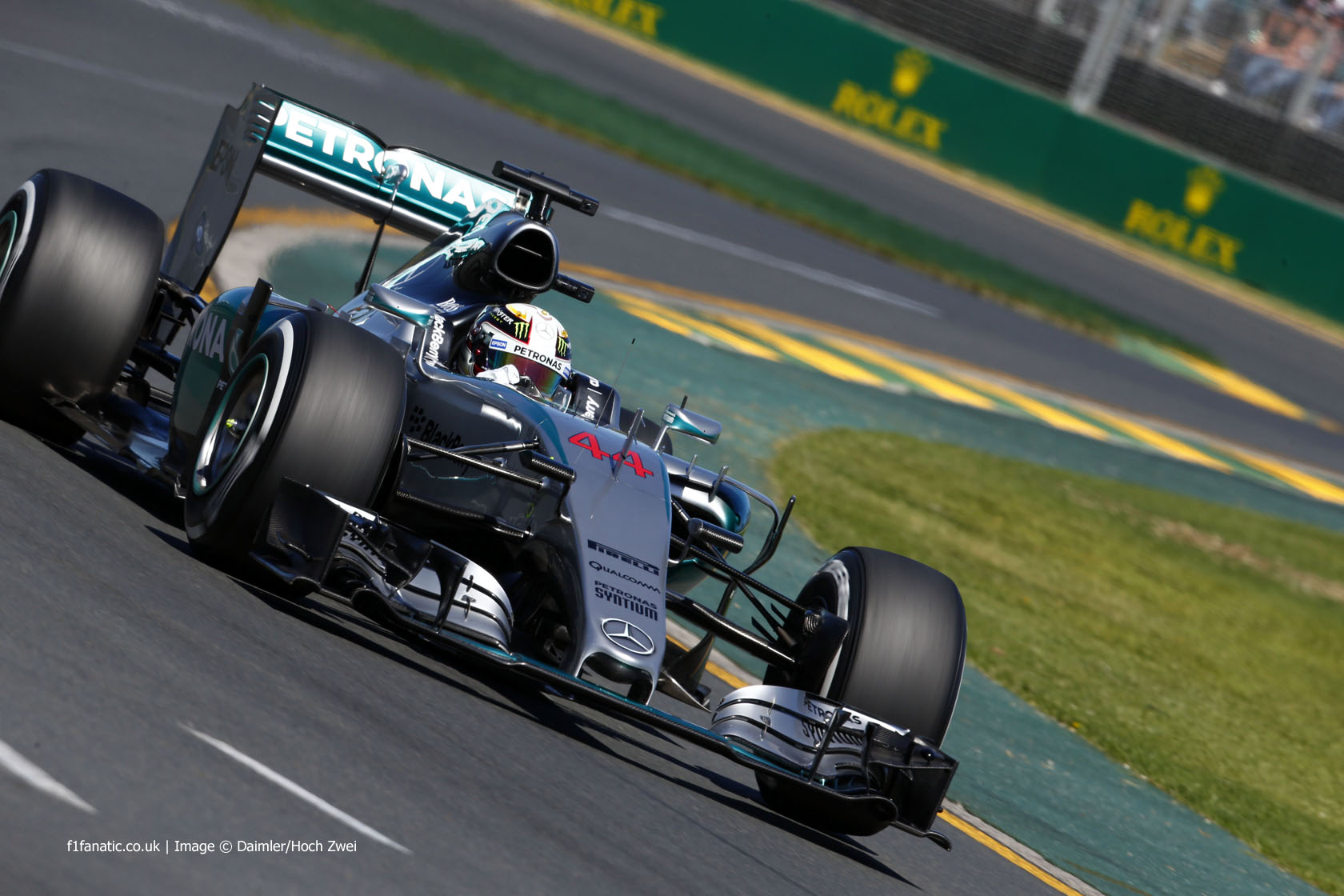 Lewis Hamilton won the opening race of the 2015 in Melbourne ahead of team mate Nico Rosberg with what few of their rivals finished a long way behind.

By the end of lap one just 13 cars were left in a race which 18 drivers had qualified for.

A back injury prevented Valtteri Bottas from starting, and two more drivers failed to reach the grid after problems on their way to the grid. Kevin Magnussen’s McLaren failed spectacularly, and Daniil Kvyat stopped with a gearbox fault.

Lotus’s race ended within moments of the lights going out. Romain Grosjean got away slowly from the grid and then pulled into the pits to retire. Meanwhile Pastor Maldonado lost out in a first-corner tangle and was dumped into the barriers.

Following a brief appearance from the Safety Car, Hamilton quickly re-established his lead as Rosberg reacted slowly to the resumption of the race. A single mid-race pit stop was the only time Hamilton lost the lead, and any time Rosberg drew close he appeared to have the pace in hand to stay ahead.

Sebastian Vettel jumped ahead of Felipe Massa in the pit stops to claim third on his debut for Ferrari. But the other red car’s race was ruined by his two visits to the pits. A slow left-rear tyre change hampered his first stop, and at the second the wheel failed to attach properly and Raikkonen had to park shortly after rejoining the track. The stewards are investigating whether his car was released unsafely.

Following a difficult start to the weekend there was some cheer for Sauber as Felipe Nasr came home fifth on his debut and Marcus Ericsson took eighth off Carlos Sainz Jnr in one of the race’s few passing moves. Sainz collected ninth, team mate Max Verstappen having retired shortly after his pit stop.

Both Force Indias also came home in the points, Sergio Perez taking tenth after scrapping with Jenson Button. The McLaren made it to the chequered flag, albeit two laps down and as the only finisher not to score a point.

28 comments on “Hamilton wins as Mercedes clean up in Melbourne”