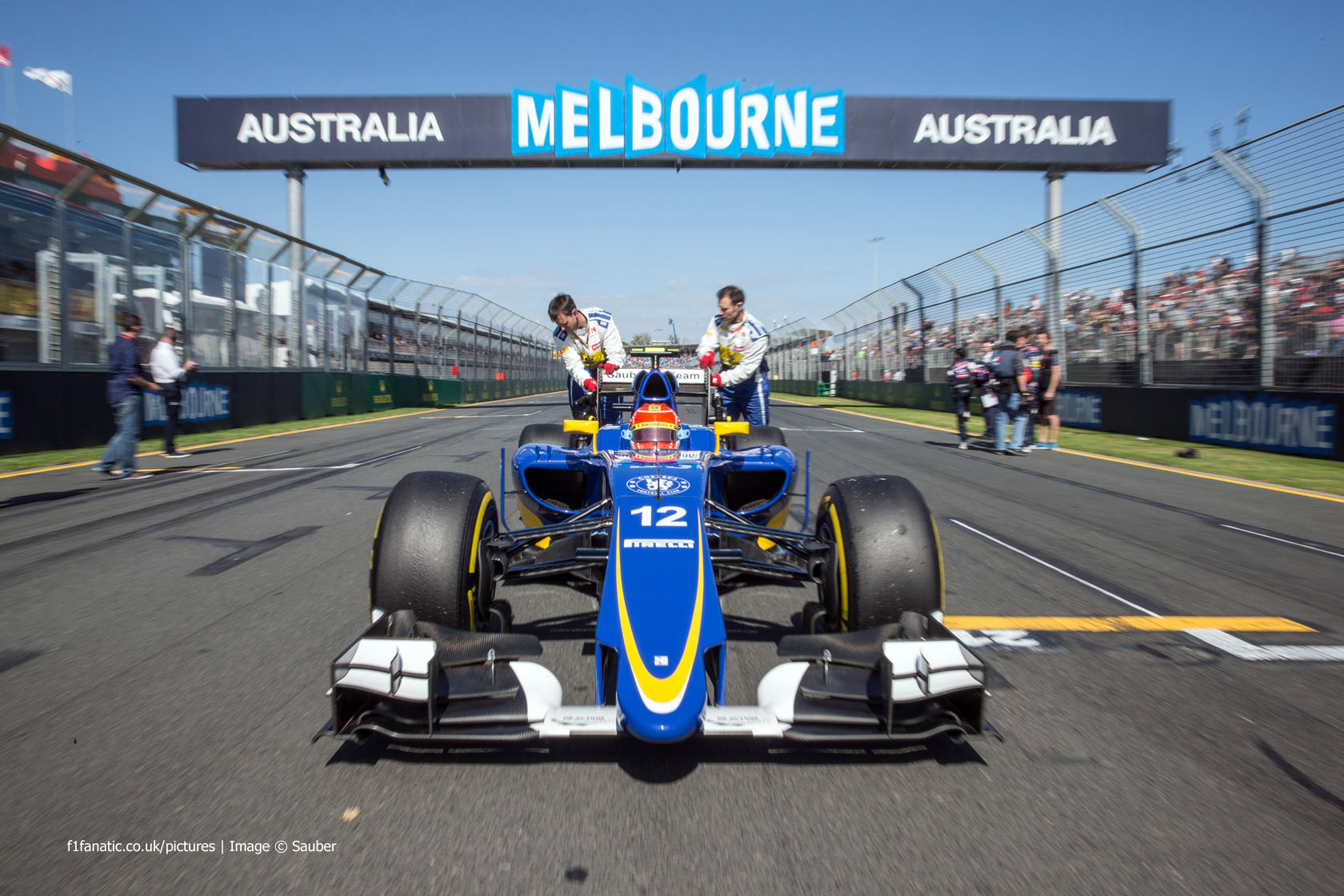 Felipe Nasr was voted Driver of the Weekend by F1 Fanatics for his fine debut performance in the Australian Grand Prix.

Nasr picked up 60.6% of the vote after bringing his Sauber home in fifth place and collected ten points for Sauber – a team which failed to score a single point last year.

It was an emphatic win for Nasr whose share of the vote was higher than any driver managed last year – the largest share going to Jules Bianchi who took 60.2% at the Monaco Grand Prix after scoring Marussia’s first points.

Nasr had never driven the Albert Park circuit before last weekend. As Sauber do not have a simulator he was unable to practice in a virtual environment and the legal mess surrounding the Giedo van der Garde case meant the team missed the first practice session as well. Nasr therefore began his first F1 race weekend very much on the back foot.

Once he did take to the track however, he was immediately quicker than his more experienced team mate Marcus Ericsson, and headed into qualifying having been on the outskirts of the top ten both times he drove the car.

Nasr delivered on that potential in the first part of qualifying, lapping almost a second quicker than Ericsson. He was the sole Sauber driver to reach Q2, where he missed out on a spot in Q3 at his first F1 weekend by less than a tenth of a second.

It could have all gone very wrong at the start but some careful driving and good judgement ensured Nasr navigated turn one safely and despite brushes with Kimi Raikkonen and Pastor Maldonado he stayed on course.

From then on Nasr withstood persistent pressure from Daniel Ricciardo, who Red Bull believed was capable of finding a way past the Sauber, but never succeeded. His final result may have been partly thanks to the misfortune of others, but it’s hard to argue he should have finished any higher than fifth. The Banco do Brasil backing emblazoned across the Sauber makes Nasr an inevitable target for ‘pay driver’ jibes, but he delivered the perfect response to them by achieving the best ever debut result for a Brazilian driver.

Has to be Nasr. Even with the depleted grid, 5th place on your debut – driving for a team that scored exactly zilch last season – can’t be ignored. Fantastic drive. Also nearly made it into Q3 and beat Ericcson in Q1 by nearly a whole second.
@celicadion23

I’ve been super critical of him in the past, especially when he got a F1 seat and Jolyon Palmer did not, but I had to pick Felipe Nasr here.

Nasr thrashed his team mate in qualifying, and was mixing with not just Red Bulls and Toro Rossos, but a Ferrari too. Yes, the Sauber may well be a quick car, but when you take into consideration that he missed first practice through no fault of his own, you must give the guy some massive credit.
@Craig-o

Any other race, I’d have gone for Hamilton. But when a driver is making his grand prix debut, a good result carries more merit in my opinion.

All three rookies did a very good job all weekend, but looking at final result, I’m voting for Felipe Nasr. I believe he showed in testing that he has talent worthy of having a shot in Formula One and he proved that on Sunday with an impressive drive.

I’m feeling pretty optimistic about the future of the talent pool in F1 these days.
@Willwood

Nasr, and my word was I impressed. I know he has had a lot of doubters coming in to F1 given that guys who are seen as better missed out on opportunities, but I’ve always felt like he’s one to support. I have no idea why, but I always found myself cheering for him during his GP2 days.

However he showed exactly what he can do. He was quick, out qualifying his team mate substantially (although it is Ericsson). He was also smart, once again quick in the race and much like in GP2, very consistent. All of this meant he was able to hold off to charging cars behind him, one of them a Ferrari. Fantastic job. I just hope he gets to keep going and proving what he can do.
@Philereid

Nasr was the one thing I really enjoyed about that race. He’s had so many detractors, despite the fact he’s won Formula BMW and British F3 titles, along with a hugely competitive GP2 career.

He’s driving for a team with no simulator, and missed first practice (not to mention all of the stress of the court). But ultimately he drove beautifully. Much like his best GP2 drives he was ultra smooth, calm and consistent. He is a driver who shows the virtues of doing the junior ladder properly; he’s actually ready.
@Jmc200 With Nasr receiving such a vast number of the votes, there were very few to share between the other drivers. Among the others who stood out were race winner Lewis Hamilton and Ferrari debutante Sebastian Vettel.

Hamilton did the best job and won the race. The driver of the weekend should be the most valuable man racing in Melbourne and that was Hamilton.
@Herberto

I actually voted for Vettel. While I think Nasr did an excellent job, and made this a very tough decision, I think Vettel takes the cake, because of the expectations on him. Unlike Nasr, who only really needed to have an OK weekend, coming to Ferrari, especially after a season like 2014, puts a lot of pressure on a driver, and Seb really lived up to it, and did great.
@Zjakobs

However @Claudioff wanted to vote for one driver who didn’t feature in the poll:

Easy: Alonso for finding a way to avoid what would be the most embarrassing weekend of his career.
@Claudioff