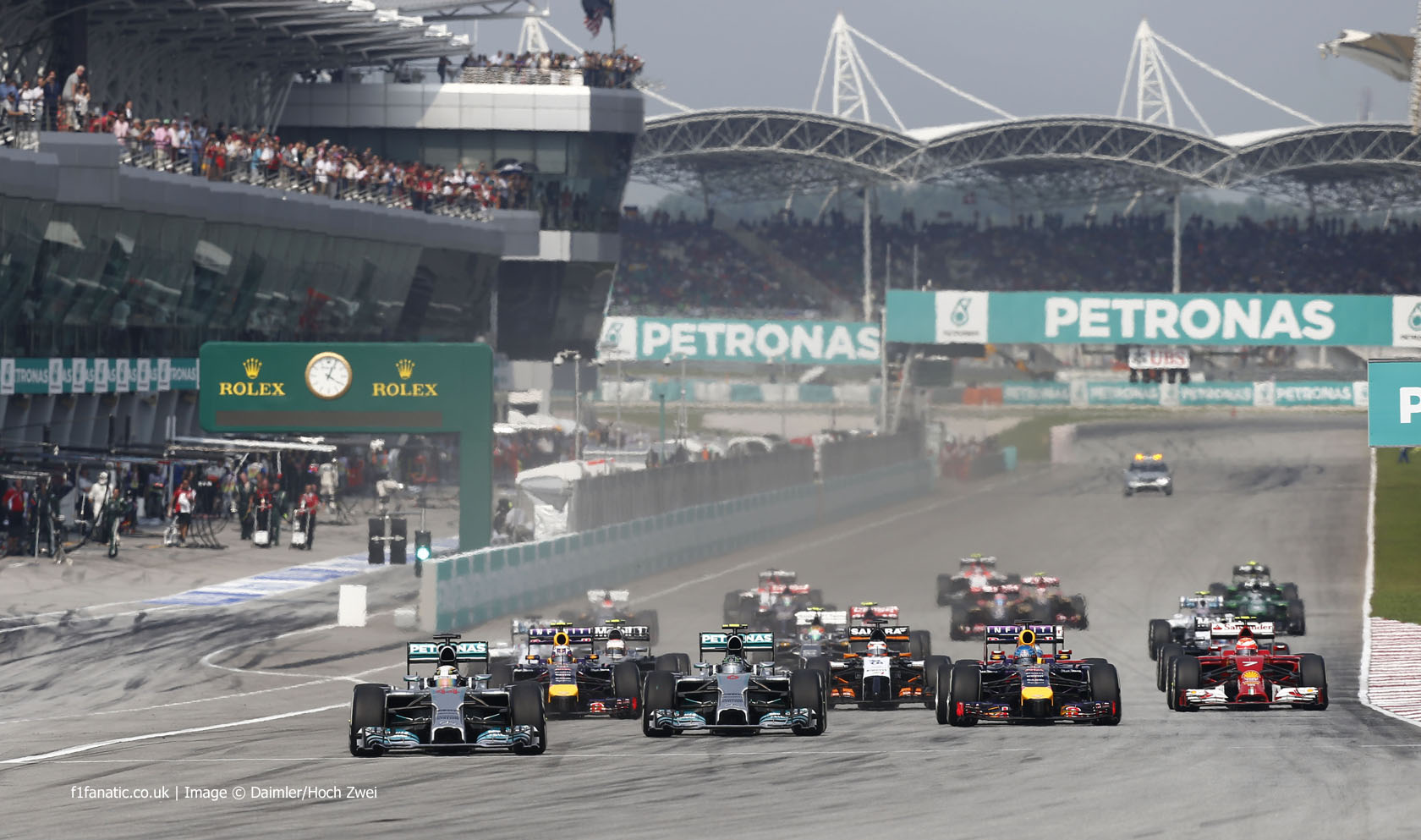 A small field and a high retirement rate meant there were almost not enough cars to fill all the points places at the Australian Grand Prix.

And it won’t get any easier for the teams at the second race of 2015 in Malaysia this weekend. The suffocating humidity and heat at the Sepang International Circuit wrings the life out of cars, and teams will be pushing their cooling solutions to the maximum.

Each driver has just four power units to see them through the season and some teams have already been forced to eat into that allocation. Any losses incurred now will hurt them later in the year, although the cancellation of the German Grand Prix will slightly ease that pressure.

It isn’t just the cars that suffer – the drivers will too, especially Fernando Alonso and Valtteri Bottas who are due to return following their injury-enforced absence from the opening round.

The other challenge drivers can expect to face at some point during the race weekend is rain, which tends to fall in heavy bursts in the later afternoon at Sepang. The teams have not yet had significant wet weather running with their new cars.

While the small field size and spate of pre-race retirements made for a disappointing event in Australia, the lack of strategic variety was also noticeable as most drivers made it through the race with a single pit stop. Pirelli have brought their most durable tyres to cope with Sepang’s many quick corners and abrasive surface, so while a three-stop strategy was the norm last year Friday may show some teams could opt for two-stoppers on race day.

The ease of overtaking at Sepang makes alternative strategies more inviting, as the long final straight and start/finish straight are both DRS zones. “You can pass someone on the first straight into the last corner,” explains Daniel Ricciardo, “but obviously they can get you back”.

“So it’s one of those ones where if you have an opportunity you go for it, but remembering that they can always get you back with DRS one hundred metres later”.

Toto Wolff described the team’s start to the season in Australia as “faultless” but he is wary of their rivals’ potential. “Ferrari have made a clear step forwards,” he said, “Williams also look very strong and you can never count anybody out at this stage”.

Valtteri Bottas should be back in the Williams providing he passes an FIA medical exam tomorrow following the back injury he sustained in Australia. He looked a shade quicker than Massa in Melbourne, and will be expected to lead the team’s fight against Ferrari. One of the most intriguing story lines to develop at the first race weekend of the year is the fractured relationship between Red Bull and their power unit supplier Renault. While the four-time world champions have been quick to blame the engine manufacturer for their poor start to the season, Renault has become increasingly vocal about Red Bull’s shortcomings.

Director of operations Remi Taffin said Renault had made “genuine progress” which was “not at all shown in Melbourne”.

He expects a more competitive showing from Red Bull and Toro Rosso. “Our design development group has been working non-stop to create counter-measures to improve drive-ability and reliability and correct the issues we saw in Melbourne.”

In Australia the SF-15Ts ran reliably and – in the race at least – were the next-quickest cars after the Mercedes. Will that be the case in Malaysia?

Sepang will show how much progress Ferrari have made with their aerodynamics – a key weakness in recent years. Williams expect to be more competitive at this track so the contest between the two will be a key battle to monitor this weekend.

It says a lot about the state McLaren are in that racing director Eric Boullier is taking encouragement from the mere fact the car ran in every session in Australia.

Honda hope to run the engine in a “marginally” less conservative mode but motorsport chief Yasuhisa Arai admits “we do not yet know if we will be able to do that”. They should at least be back to full driving strength providing Alonso does return.

Although Nico Hulkenberg brought his car home in the seventh place he urged his team to keep a lid on expectations with the still very new VJM08. “We know the circumstances in which we got this result and we know the next races will be tough,” he said.

It was nip-and-tuck between Toro Rosso’s young rookies in Australia. What could swing the battle this weekend is that Carlos Sainz Jnr is their only driver to have raced at Sepang before. He took a pair of wins in the Formula BMW Pacific races at the track in 2010 – as did fellow Red Bull junior driver Daniil Kvyat. Lotus got both cars into Q3 at Melbourne and expect to make a habit out of it during the rest of the season.

Technical director Nick Chester believes the team were on for a solid points finish in Australia before misfortune intervened. “If we didn’t experience the unfortunate crash and the charge air system leak, we could probably have been looking at fifth and sixth positions,” he explained.

“Both drivers had qualified ahead of Felipe Nasr who ended the race fifth and our long run performance on Friday looked good so there is no reason why our drivers could not have achieved that.”

Pastor Maldonado’s race ended when he tangled with Nasr at the first corner. “There was nothing I could do as there was contact occurring behind me which then collected my car,” he said.

Sauber’s wrangling with Giedo van der Garde kept Nasr (and Ericsson) from driving in first practice last weekend. Despite that Nasr took an excellent fifon on his debut – but he won’t run in first practice this weekend either.

This time it’s because Ferrari junior driver Raffaele Marciello will be having his first run on the C34. “I have never been to Malaysia before, but I know the track quite well from the Ferrari simulator,” he said.

The Manor MR04s never left the garage in Australia but team principal John Booth is optimistic the teams will have “a more typical race weekend” in Malaysia.

“We headed back to the UK to regroup technically and bolster the work we had completed in the field in Melbourne, and as a result we are in a different position to the one we were in two weeks ago”.

Are you going to the Malaysian Grand Prix?

If you’re heading to Malaysia for this weekend’s race, we want to hear from you.

Who do you think will be the team to beat in the Malaysian Grand Prix? Have your say below.

32 comments on “Reliability will be top concern after Australia failures”