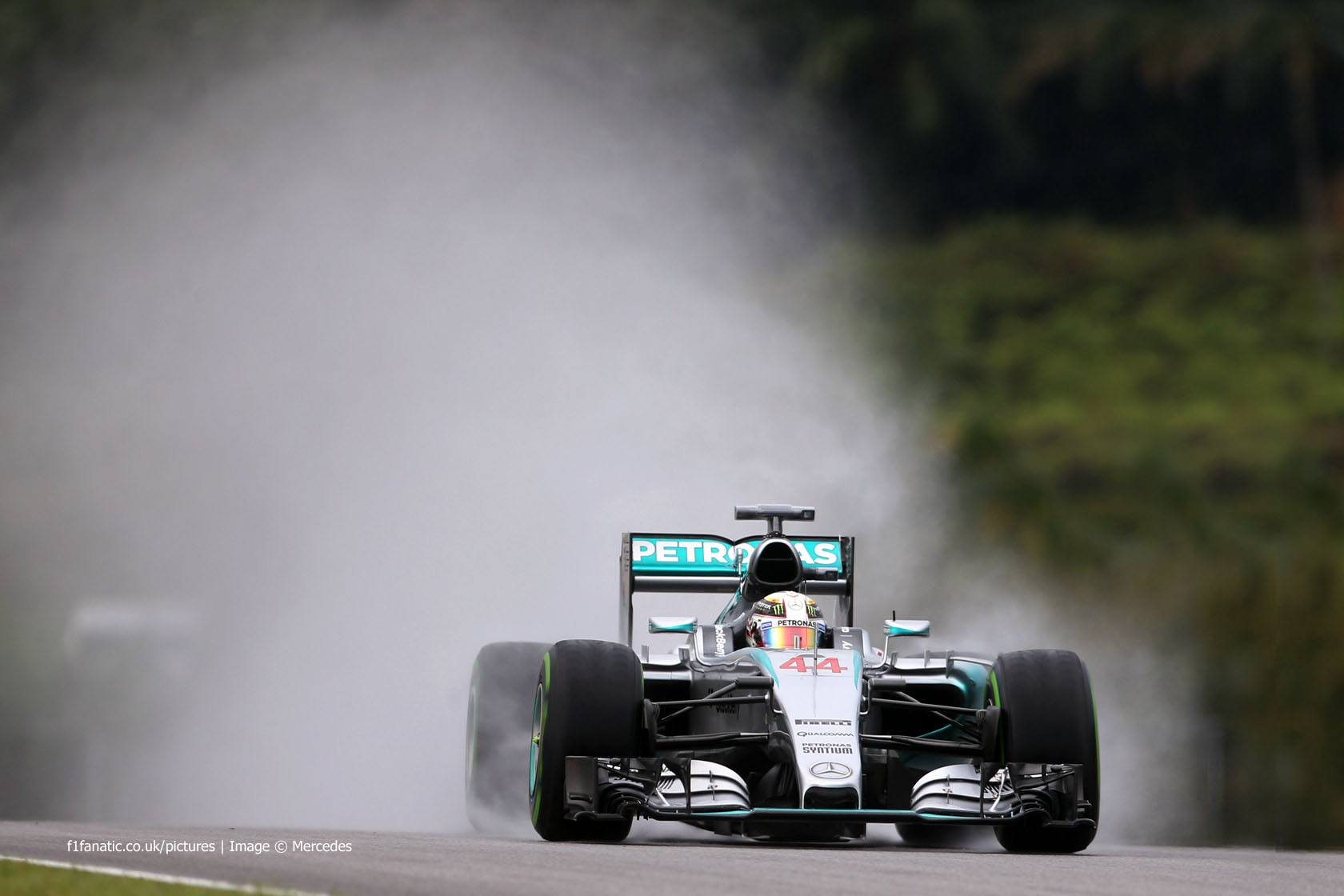 For the second year in a row Lewis Hamilton narrowly beat Sebastian Vettel to pole position for the Malaysian Grand Prix in a rain-hit qualifying session.

The pair will share the front row of the grid as they did last year, again with less than a tenth of a second between the pair of them.

Nico Rosberg will line up second in the other Mercedes, but the second Ferrari of Kimi Raikkonen failed to make the cut for Q3 when the rain arrivew.

The skies were gradually turning darker as qualifying began so the drivers did not waste any time in getting their first laps done. Mercedes comfortably led the way, Hamilton a tenth ahead of Rosberg, their advantage over the rest of the field bolstered by their decision to use the softer medium compound tyres.

That was bad news for Manor, whose chances of competing in tomorrow’s race rested on whether they could set a time within 107% of the quickest lap in Q1. They had done so in practice, but when crunch time came Roberto Merhi failed to make the cut and Will Stevens never made it out of the garage as the team grappled with a fuel system problem which had struck during final practice.

Whether they can start the race is now in the hands of the race stewards. Previously teams who failed to beat the 107% time in qualifying but had shown they could in practice have been allowed to start the race, but on each occasion the stewards had said those decision did not set a precedent for the future.

Both Lotus drivers came close to elimination in the dying minutes but escaped the clutches of the bottom five. That left the McLaren duo facing an early exit for the second race ago, with Jenson Button narrowly pipping Fernando Alonso. The decisive moment in the second part of qualifying came when the drivers made the dash from their garage to the pit lane exit. By now the skies were ominously heavy – when Rosberg asked his race engineer how urgent it was to keep up the pace on his out-lap he was told it was “very urgent – first lap will be it”.

So it proved. The first spots of rain were falling as the drivers finished the lap, and as always in Sepang this was swiftly followed by a deluge.

This was no problem for Sebastian Vettel, who had positioned himself at the front of the queue, but further back several drivers were struggling in traffic.

Kimi Raikkonen began his lap trying to pass Marcus Ericsson and was still trying to overtake the Sauber as he completed his lap. The result was Ericsson’s lap was four-tenths of a second quicker – and Raikkonen found himself eliminated.

The pair were overtaken by Hamilton as they began the next lap. His departure from the pits was delayed because of a problem getting his engine to fire up and the Mercedes driver only just managed to snatch a place in the top ten. By now the rain was lashing down, and there was no prospect of anyone setting any further times.

Heavy rain continued to fall as the clock ticked down in Q2, and the start of Q3 was postponed for over half an hour. By the time the session had begun most drivers had decided intermediate tyres were the way to go – and those who opted for full wets soon returned to the pits to change them, including the Williams drivers and Grosjean’s Lotus.

Meanwhile those who had started the session on intermediates were pressing on. Rosberg posted a 1’51.066 but Hamilton beat that with ease, lapping over a second quicker than his team mate. Max Verstappen briefly went third-quickest before being demoted by Vettel.

For the final runs all the drivers were on intermediate tyres, and Hamilton immediately set the fastest time through the first sector of the lap. But Rosberg, ahead, had backed off, and Hamilton had to overtake his team mate as they went into turn seven, spoiling his run.

That meant Hamilton led the way as they began their last lap and Rosberg behind him potentially stood to benefit from the ever-drying track. But as it turned out neither of them improved their times – and that brought Vettel into play.

The Ferrari driver produced a 1’49.908 with his final run which lifted him ahead of Rosberg, and left him just 74 thousandths shy of Hamilton. Given the Mercedes had out-qualified everyone by 1.3 seconds in Australia, this was a significant improvement.

But although Vettel was clearly pleased with the result he was also disappointed at having come so close for two years in a row. “Not again!” he exclaimed on the radio. “After last year, the same, one tenth!”

His former team got both their cars in the top five, bumping Verstappen back to sixth place. The Williams drivers, who had looked more competitive in the dry practice sessions, fell to seventh and ninth on the wet track.

133 comments on ““Not again!” Hamilton pips Vettel to Malaysia pole”