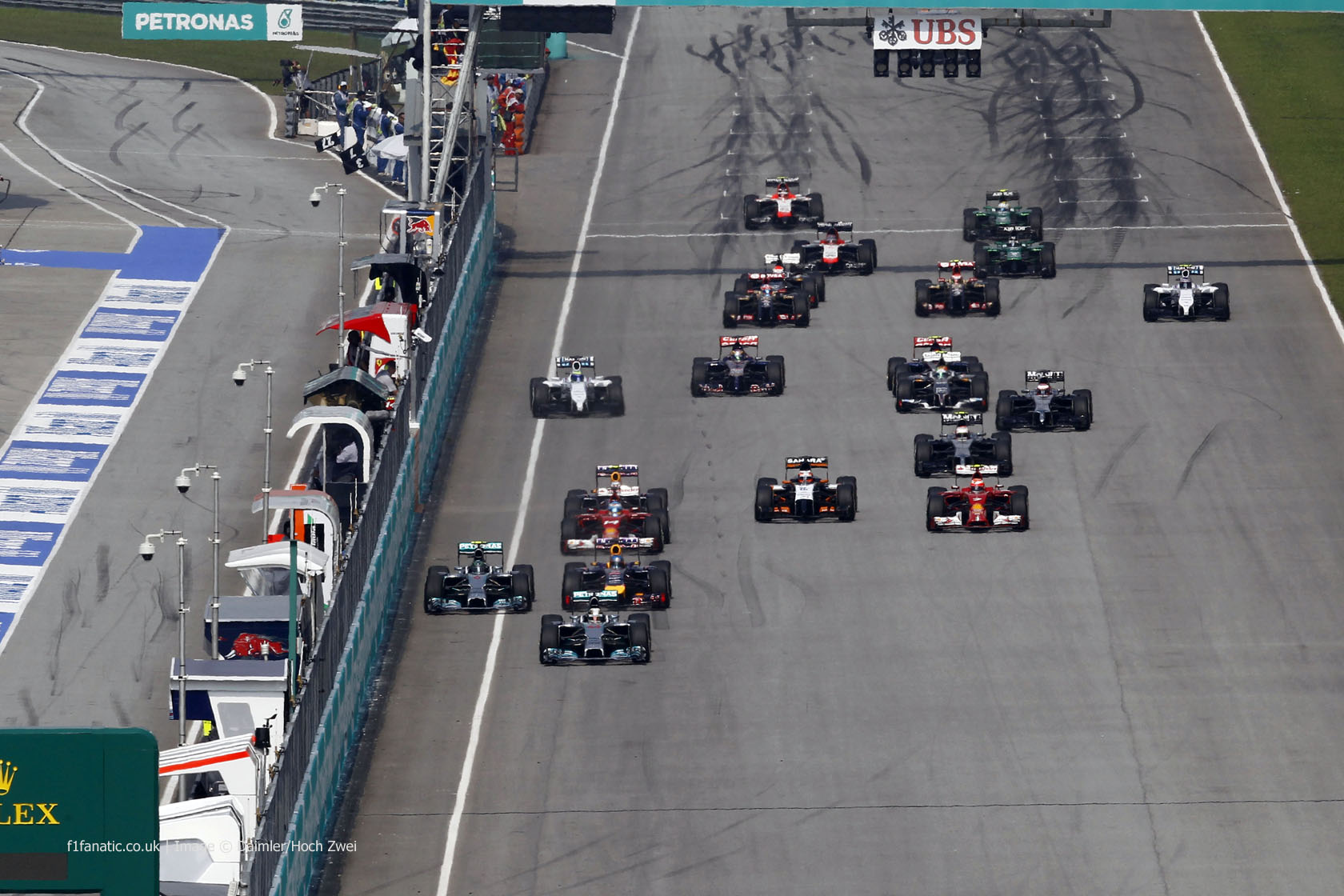 “It would be good if they can come a bit closer”, said Nico Rosberg in the press conference after the Australian Grand Prix when talking about whether Ferrari could close the gap to Mercedes in the near future.

“Do you really hope so? Seriously” a sceptical Sebastian Vettel responded. After today’s qualifying session, Rosberg might appreciate what Vettel was getting at.

For the second year in a row Vettel took advantage of a wet qualifying session at Sepang and managed to bump Rosberg’s Mercedes off the front row. But will he be able to stay there?

The run to turn one at Sepang is one of the longest and widest on the calendar. It has seen several controversial collisions and super starts – notably Rosberg’s brilliant launch from fourth on the grid into the lead six years ago.

Last year Rosberg was able to use the Mercedes’ superior grunt and acceleration to out-drag Vettel’s Red Bull to turn one. But while last year the Renault engine in Vettel’s Red Bull had a 13kph straight-line speed deficit to the Mercedes, this year his Ferrari had a 4kph advantage in qualifying. If he can get off the line well, Vettel stands a better chance of keeping Rosberg at bay to begin with at least.

Pole sitter Lewis Hamilton would probably not be too concerned if he saw Vettel’s red Ferrari instead of Rosberg’s silver Mercedes in his mirrors at the end of lap one. While Ferrari are undoubtedly in better shape in Malaysia that they were two weeks ago – particularly in the hot conditions seen during practice – they don’t yet look to have the pace to threaten Mercedes over a race distance. Ferrari have looked particularly strong on the medium tyres compared to Mercedes. Unfortunately for them, the hard tyre is likely to be the preferred race tyre – Mercedes avoided using them in Q1 so they would have an extra fresh set for the race. However the opening phase of the race when Vettel and the Mercedes drivers are all on the medium tyres they used in Q2 could be very interesting.

The abrasive nature of the Sepang track means there tends to be a wide gap in performance between new and old tyres. This means the effect of pitting early and gaining the ‘undercut’ is very powerful. In Melbourne we saw Vettel do the reverse of an undercut, gaining a position by pitting several laps later than a rival, but that is less likely to be possible here.

As the race starts an hour earlier than last year drivers can expect hotter conditions than in recent seasons, resulting in the kind of slippery conditions we saw in second and third practice. But of course you can never take for granted what the weather will do at Sepang – more rain is entirely possible.

From fourth and fifth on the grid Red Bull look likely to enjoy a more competitive race. The Williams drivers share row four and will be expecting to press on towards the top five if the race stays dry – but they still don’t seem to have cracked wet weather performance yet.

McLaren have clearly taken a step closer to the rest of the midfield but even if they are able to get ahead of a few of their rivals at the start they are likely to be vulnerable on the straights. As for Manor, tomorrow’s race is likely to be the first of many in which every other car in the field is capable of lapping them at least once.

Will Rosberg blast past Vettel at the start again? Can Williams bounce back from a disappointing qualifying session?

Share your views on the Malaysian Grand Prix in the comments.