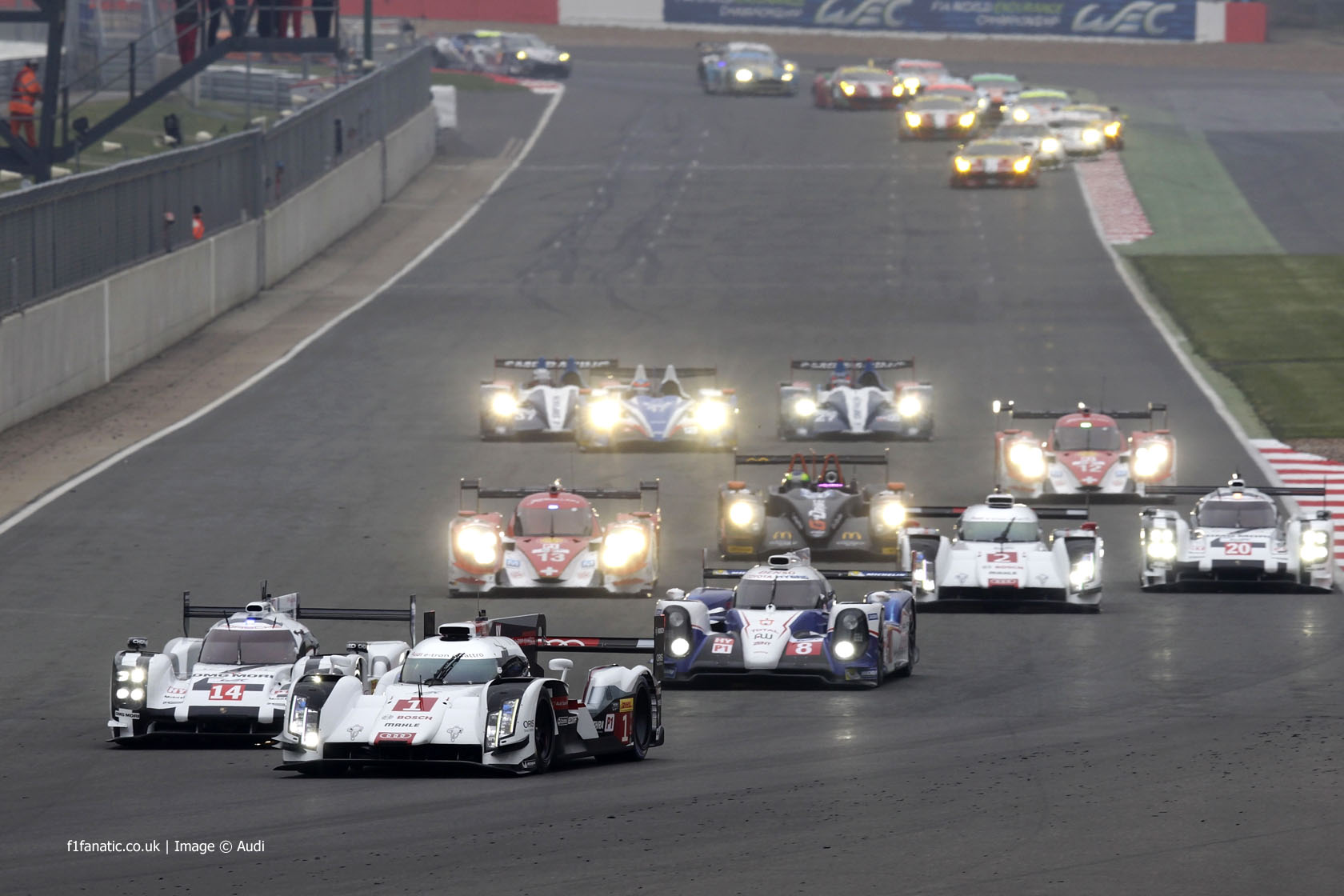 It was a bumper weekend for motorsport fans, with racing taking place almost anywhere you looked.

The 2015 World Endurance Championship got underway at Silverstone, with the number seven Audi R18 of Benoit Treluyer, Marcel Fassler and Andre Lotterer taking the first victory of the new season.

Supporting the WEC this weekend was the European Formula Three championship – the series Max Verstappen graduated from last year – with Felix Rosenqvist, George Russel and Charles Leclerc all victorious over the first three races of the season.

In other single-seater action in Jerez, the opening races of Euroformula Open were won by Alessio Rovera and Konstantin Tereschenko.

In North America, a strange first race for the NOLA Motorsports Park in Louisiana saw James Hinchcliffe claim a surprise win in round two of the IndyCar Series, while Jimmie Johnson led a three car scrap across the line in NASCAR.

Finally, the new-for-2015 TCR series had its second round running as a support series to Formula One in Shanghai, with Gianni Morbidelli and Andrea Belicchi winning the two races.

The opening round of the 2015 World Endurance Championship saw Audi take the honours in the Six Hours of Silverstone, with Benoit Treluyer, Marcel Fassler and last year’s Caterham deputee Andre Lotterer winning in the number seven car. The R18 beat the Porsche of Roman Dumas, Marc Lieb and Neel Jani by 4.6 seconds, while the defending champion Toyota driven by ex-F1 trio of Anthony Davidson, Sebastien Buemi and Kazuki Nakajima took third, just under 15 seconds behind.

Despite leading the opening hour from pole, the #17 Porsche that former F1 driver Mark Webber shares with Timo Bernhard and Brendon Hartley suffered gearbox issues early in the event, forcing a retirement.

In the LMP2 class, G-Drive took the flag with Roman Rusinov, Julien Canal and Sam Bird, while the AF Corse Ferrari of Gianmaria Bruni and Toni Vilander won the LMGT Pro class. Aston Martin continued their recent domination of the LMGT Am category with Paul Dalla Lana, Pedro Lamy and Mathias Lauda – son of three-time Formula 1 champion Niki – claiming the top step on the podium.

Round two of the WEC takes place in May with the Six Hours of Spa-Francorchamps.

Joining the WEC at Silverstone was the European Formula Three Championship. A damp first race was won by Felix Rosenqvist for Prema Powerteam, who took victory by only 0.938 seconds from another man with previous F3 experience, Antonio Giovinazzi for the Jagonya Ayam-backed Carlin satellite team. Briton Jake Dennis was third for Prema.

In race two, polesitter Charles Leclerc was beaten to the win by fellow rookie George Russell’s Carlin, while Leclerc finished second for Van Amersfoort – the team who ran Toro Rosso driver Max Verstappen last season. Giovinazzi was third, while another highly rated rookie and Ferrari junior driver Lance Stroll took fourth. Race one winner Rosenqvist was demoted to 35th and last on the grid after a technical infringement in qualifying, but made a fantastic recovery drive to take seventh.

The final race was taken by another rookie, as Leclerc managed to retain his pole position advantage to win. Again Giovinazzi took to the podium with second, while Jake Dennis was again third. Round two of the championship will take place in Hockenheim on the support bill of the DTM in early May.

Video above is race one. To see races two and three, head over to Formula 3’s official YouTube channel.

After an electrical storm caused the cancellation of qualifying halfway through the session, the grid order was determined by championship positions, placing Juan Pablo Montoya on pole. However, in a rather farcical race dominated by incidents and caution periods, the race was eventually won by a strategy gamble as James Hinchcliffe made just the one stop on his way to victory – promptly running out of fuel on the cool-down lap.

From the moment Hinchcliffe took the lead on lap 33 just prior to a caution period, the race barely saw any more green flag racing with an incident seeming to occur as soon as a green flag flew, prompting another caution. Wet conditions at the start and the multiple incidents it caused meany the race only ran to 47 of the scheduled 75 laps after a 1 hour 45 minute time limit expired.

Much like the Chinese Grand Prix before it, the race ended under a caution period following a nasty accident involving Simon Pagenaud, Ryan Hunter-Reay and Sebastian Bourdais, in which the ex-F1 racer was very lucky to avoid a whack to the head.

An action-packed opener to the 2015 Blancpain GT Series saw 58 entrants battle it out over three hours in Monza. The new Lamborghini Huracan GT model dominated the race, but the winning cars were eventually excluded following a row over a refuelling restrictor. The race result is under appeal.

The first race of the opening round of Euroformula Open 2015 took place in Jerez in mixed conditions, with some sections of the circuit wet and other sections bone dry. This caused a split in tyre choice, with some drivers opting for wets, and others slicks – which later proved the correct choice. Alessio Rovera overcame the difficult conditions – and a safety car period – to win race one.

Race two was considerably more straightforward as Konstantin Tereschenko – best known for his spectacular aerial incident at the Bus Stop chicane in GP3 last season – dominated from lights to flag, also taking the fastest lap and a bonus point with it, meaning he leaves Jerez as the championship leader.

Video above is race one. To see race two, head over to Euroformula Open’s official YouTube channel.

The first of ten consecutive NASCAR races was won by Jimmie Johnson after an epic three-way fight for the win with Kevin Harvick and Dale Earnhardt Jr. The three drivers made a late race charge after the final caution, eventually locking out the podium.

Round two of the TCR International Series took place in Shanghai as the championship followed the F1 circus to China. Race one saw pole sitter Gianni Morbidelli take the win in his Honda, followed home by West Coast team mates Rene Munnich and Kevin Gleason to make it an all-Honda Podium. Stefano Comini was best SEAT in fourth, five seconds off the pace, while Mikhail Grachev took the Audi TT to its best result so far of sixth.

Target Competition dominated race two, with Andrea Belicchi winning ahead of team mate Comini. Morbidelli made a great drive from the reverse grid to overtake multiple cars on his way to third. He was as high as second, before what seemed to be an electrical issue demoted him to fourth, before the fault resolved itself to allow the Italian to take third back from Craft Bamboo SEAT driver Pepe Oriola.

Morbidelli leads the championship by two points over Comini, with Belicchi third and Oriola fourth. The series heads to Europe for the first time in May for the next round at the Circuit Ricardo Tormo in Valencia.

Video above is race one. To see race two, head over to TCR’s official YouTube channel.

Next weekend we have round three of both IndyCar and the United SportsCar Championship from Long Beach while Japan’s Super Formula championship begins at Suzuka. NASCAR’s Sprint Cup rolls on to the manic short track at Bristol and there’s action from both the British and World Touring Car Championships, from Donington Park and Morocco respectively.

Perhaps most importantly, the Bahrain Grand Prix will also take place next weekend, as will the opening round of the 2015 GP2 season.