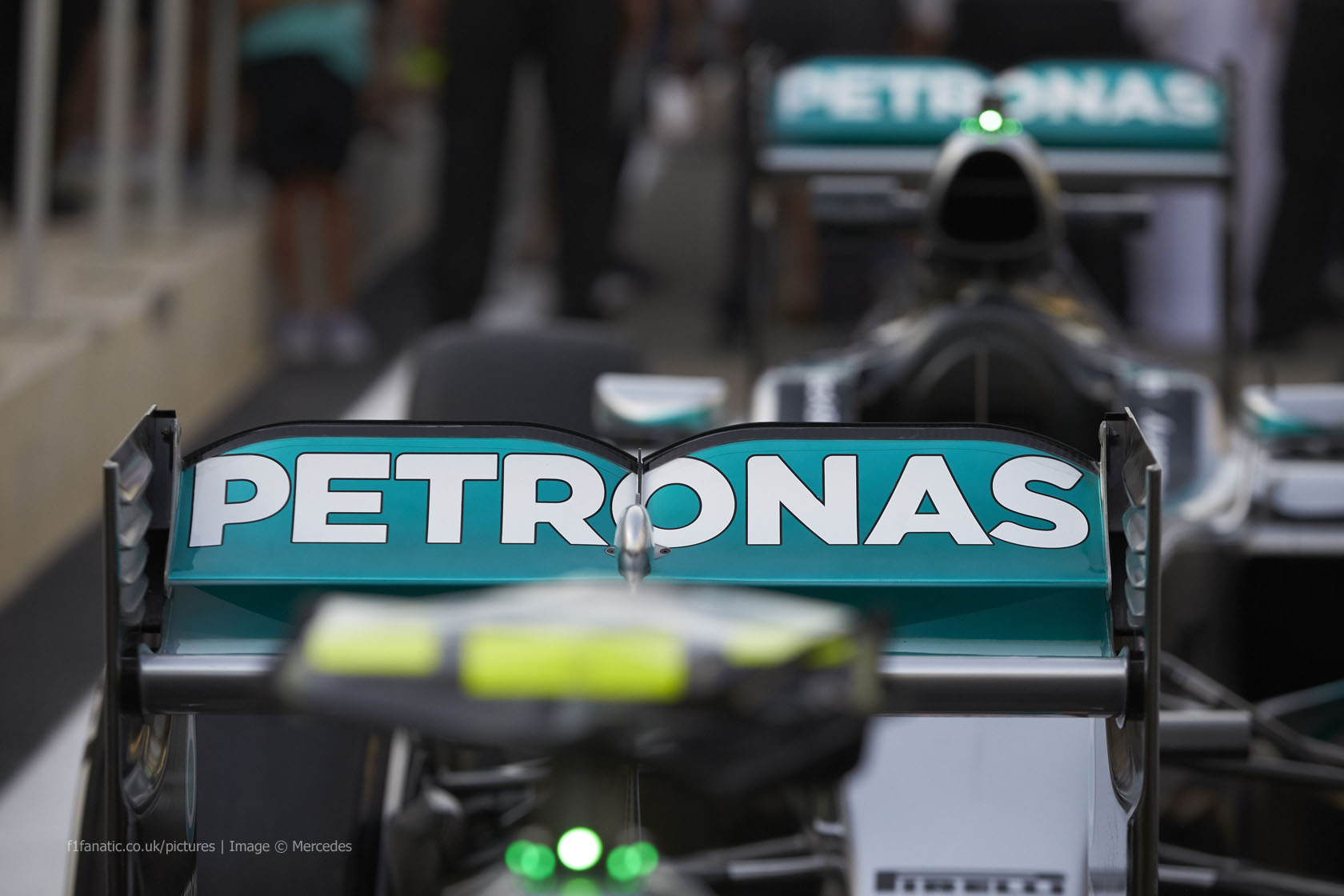 Mercedes were back on top in second practice in Bahrain with Nico Rosberg and Lewis Hamilton quickest from Ferrari.

But there was drama as Sergio Perez and Sebastian Vettel made contact at Turn One in the closing minutes, bringing out the red flag and leaving the Ferrari with a broken front wing.

The session began with a setting sun and floodlights illuminating the circuit but temperatures not too much cooler than the afternoon session. Many drivers were heard complaining about the brightness of their steering wheel displays early in the session.

Mercedes immediately upped their pace from the first session, with Lewis Hamilton setting the early benchmark with a 1’36.795 on the Medium tyres – quicker than Ferrari managed in first practice.

After Jenson Button lost an entire session’s running in FP1 when his McLaren seized up at Turn One, there was more frustration for Button in the second session when he stopped at Turn 11 after completing only three laps.

Ferrari were the first team to try the Soft compound tyres, with Kimi Raikkonen improving by around two seconds on his Medium. Sebastian Vettel was set to beat his team mate’s time, but ran wide at the final corner, costing him half a second.

Then it was the turn of the Mercedes to try out the Soft compound for the first time. Hamilton went quickest with a 1’34.762, but was immediately beaten by Rosberg who improved by a tenth on his team mate.

After stopping early, McLaren were able to get Button’s McLaren back out on the circuit for some brief runs.

With just over ten minutes to go, the session was red flagged when Sergio Perez made contact with the front wing of Vettel’s Ferrari, leaving debris on the track at Turn One.

Vettel had claimed over radio that he had suffered a brake failure and was hit by the Force India at the apex of the turn as Perez abandoned a move to pass Marcus Ericsson’s Sauber ahead. The incident is under investigation by the stewards.

When the session restarted, Kimi Raikkonen and Lewis Hamilton were seen driving around a queue of cars waiting at pit exit by taking to the restricted area of the inside of the pitlane. Both drivers are also being investigated.

No one was able to improve their times at the front of the field during the final minutes and Mercedes finish the first day’s running around half a second quicker than the Ferrari’s on ultimate one-lap pace.

47 comments on “Rosberg quickest in FP2 as Vettel, Perez collide”