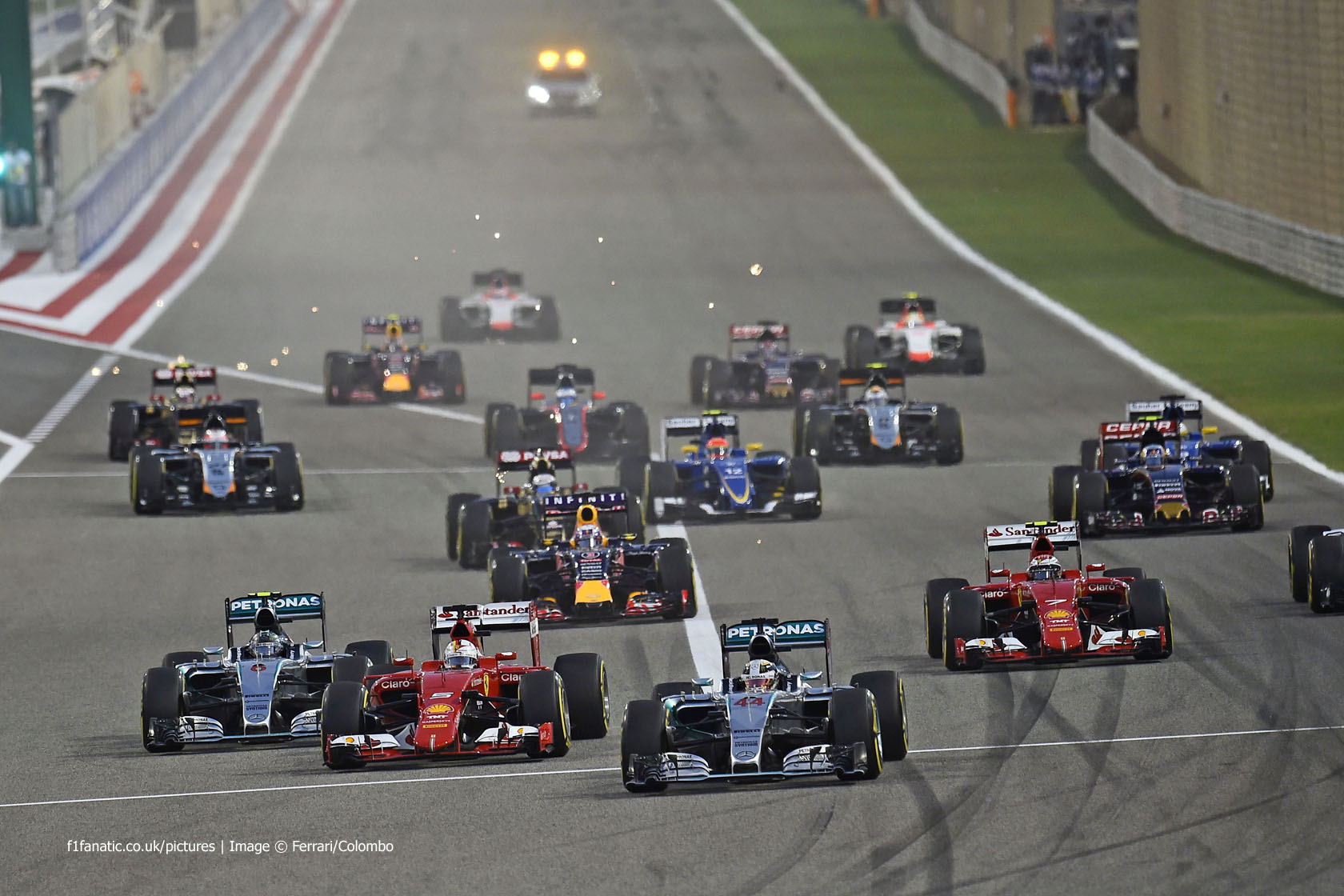 Which F1 driver was the best performer during the Bahrain Grand Prix weekend? Lewis Hamilton – Claimed his fourth pole position in a row on Sunday by a healthier margin than he enjoyed in China and Malaysia. Hamilton rarely looked threatened in the race as his team mate scrapped with the Ferraris. A last-lap brake-by-wire glitch might have proved disastrous had it struck earlier, but it didn’t stop him from winning his third race this year.

Nico Rosberg – Bumped back to third on the grid by Vettel and said after qualifying he’d tried too hard to preserve his race tyres in Q2. Having lost a place to Raikkonen at the start he took both the Ferraris in the first stint to take up second behind his team mate. When Vettel jumped back in front of him by pitting early Rosberg was always able to take the place back on the track, but he fell victim to a late attack from Raikkonen when he suffered the same braking fault as Hamilton, albeit slightly earlier. Daniel Ricciardo – Seventh on the grid behind Mercedes, Ferrari and Williams looked about as good as the RB11 was capable of, as did sixth in the race after Massa’s problems. Ricciardo’s Renault engine failed spectacularly as he accelerated out of the final corner and though he was able to take the chequered flag without losing a place there will inevitably be a price to pay for it later in the year.

Daniil Kvyat – Failed to make it out of Q1 after spinning in final practice. He gained two places at the start but lost them on the next lap to Massa and Maldonado. However from then on his recovery drive picked up pace and he brought his car home in the points, re-passing the long-running Massa with three laps to go.

Felipe Massa – Qualified behind Bottas but suffered a greater setback before the race began when a technical problem forced him to start from the pits. He suffered a further setback when he was tagged by Maldonado early on. An aggressive strategy helped him find clear air late in the race, but attempting to nurse a set of medium tyres proved too ambitious, allowing Perez and Kvyat to capitalise.

Valtteri Bottas – Completely free of back pain for the first time since being injured in Australia, Bottas took fifth on the grid ahead of his team mate and was well-placed to take advantage of Vettel’s delays. He held the Ferrari driver at bay until the chequered flag to equal Williams’ best result of the season so far with fourth. Sebastian Vettel – Showed his potential in final practice and delivered on it by splitting the two Mercedes in qualifying, lining up on the front row. However he wasn’t able to keep Rosberg behind in the race – being passed three times – and was forced to make an extra pit stop after going off and damaging his front wing. That dropped him behind Bottas, where he finished.

Kimi Raikkonen – Despite being out-qualified by his team mate again it was Raikkonen who took the fight to Mercedes in the race by running an alternative strategy, saving his soft tyres for the final stint. He was catching the Mercedes at over a second per lap in the closing stages, and he was poised to strike at Rosberg when the Mercedes’ braking problem handed him second place.

Fernando Alonso – There was a sharp contrast between the two sides of the McLaren garage in Bahrain. While Button toiled in vain, Alonso gave cause for cheer by taking the MP4-30 into Q2 for the first time, then finishing 11th in the race. Superficially that was no more than Button achieved in Melbourne – but this time there were six cars running behind the McLaren instead of none.

Jenson Button – A wasted weekend – electrical problems kept him from setting a lap in qualifying and despite being given a dispensation to start the race he was unable to do that either due to further technical trouble. Nico Hulkenberg – Force India were more competitive on a track which has traditionally suited them, and Hulkenberg delivered by taking his VJM08 into Q3, claiming eighth on the grid. The race was not as successful – he couldn’t make his tyres last and slipped to a disappointed thirteenth.

Sergio Perez – Force India’s simulations showed the downforce deficient VJM08 would not be able to use the same two-stop strategy as many of the team’s rivals. But Perez made it work and brought the car home in eighth place, a result the four-time podium finisher called “one of my best races”.

Max Verstappen – Toro Rosso reliability remains poor and Verstappen has borne the brunt of it. He hoped the understeer-prone set up which confined him to 15th in qualifying would help him in the race, but as he was unable to run full engine performance and later suffered an electrical failure it proved irrelevant.

Carlos Sainz Jnr – Bahrain was never likely to be a strong venue for the Renault-powered team so it was to Sainz’s credit that he got the car into Q3. Like his team mate, however, he was destined not to finish. Romain Grosjean – Continued his record of getting the Lotus into Q3 at every race this year, but in the race his two-stop strategy appeared inferior to his team mate’s three-stopper – though Maldonado’s early exit from qualifying meant he had more fresh tyres. Nonetheless Grosjean repeated his China result of taking seventh place, still on the lead lap.

Pastor Maldonado – In Q1 his front brakes were continuing to apply pressure even when he wasn’t using them, causing a loss of a straightline speed, meaning he was unable to progress to the next stage. He also picked up a five-second penalty for failing to take his place properly on the grid. But with plenty of soft tyres he was able to make rapid progress on a three-stop strategy and probably would have finished in the points had his engine not stopped during his final pit stop.

Marcus Ericsson – Gained four places on the first lap to run ninth but his progress was stymied by a problem with his front left wheel nut which dropped him back to 17th and ended his pursuit of a points finish.

Felipe Nasr – Qualified ahead of Ericsson but fell behind him at the start. A problem with his power unit meant he was out-gunned on the straights, and he finished the race stuck behind Alonso’s McLaren.

Will Stevens – Was compromised at the start by Pastor Maldonado lining up in the wrong grid position, which meant he fell behind Merhi for the first five laps. After finding a way by he led his team mate home and his better race pace meant he was lapped once fewer.

Roberto Merhi – Slipped up at turn four on his final run in qualifying and ended up over a second off his team mate as a result. He got ahead of Stevens at the start but felt he took too much out of his tyres trying to keep his team mate behind at the start.

Who was the best driver of the Bahrain Grand Prix weekend?