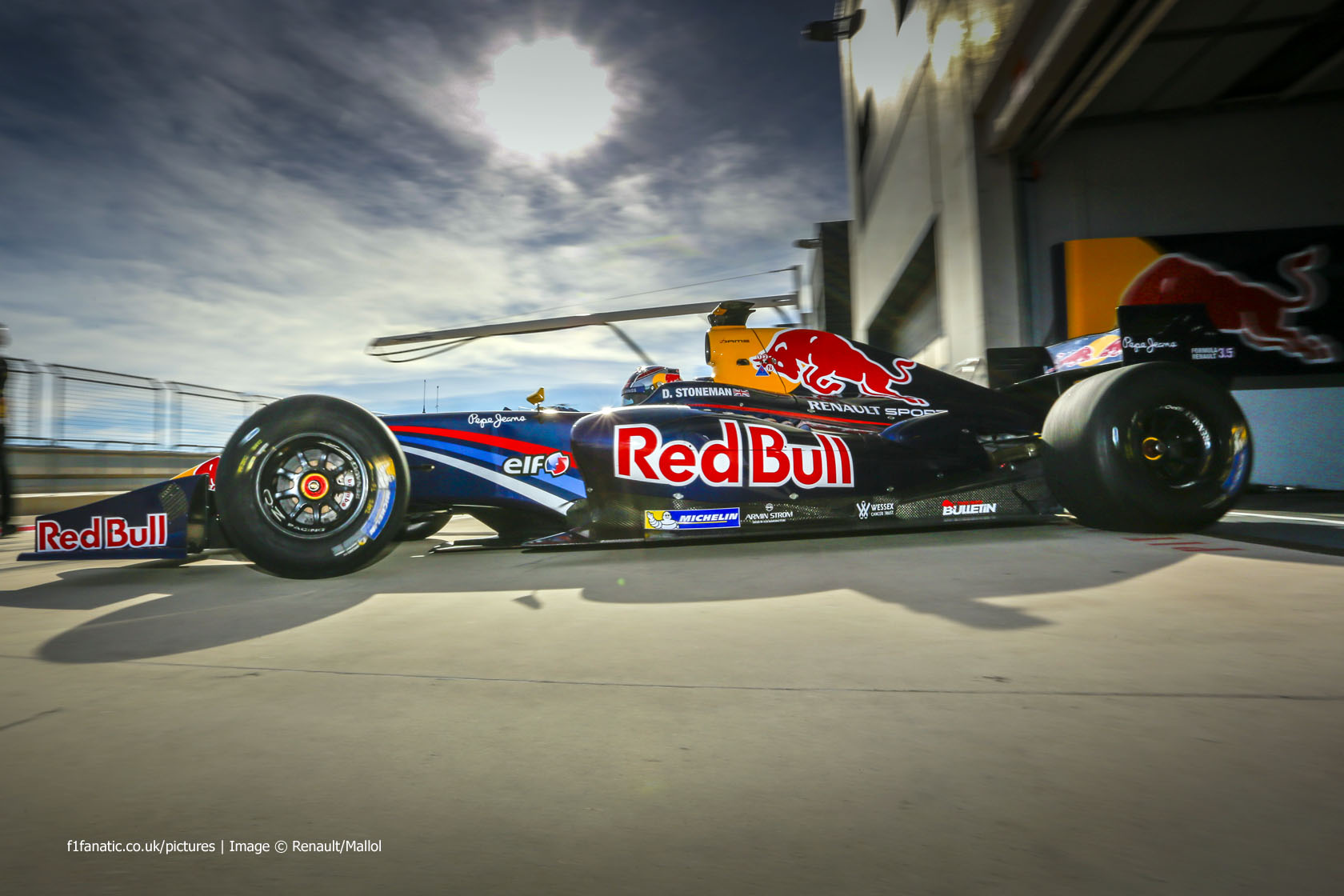 Since the curtain came down last year’s Formula Renault 3.5 season a trio of drivers have made the step up to Formula One.

Carlos Sainz Jnr set the bar high for those who intend to follow him by taking a record seven wins in last year’s championship – and then scored points on his Formula One debut with Toro Rosso.

But Will Stevens pipped him to a Formula One drive by making it onto the grid with Caterham at the final round of last year.

He has returned to F1 in 2015 with Manor where he is partnered by another Formula Renault 3.5 racer: Roberto Merhi, who kept Sainz under pressure for the title until the final race of 2014.

Surprisingly, despite gaining an F1 place with Manor, Merhi is still slated to race in Formula Renault 3.5 this year with Pons. It’s not clear how the logistics of this will be handled, as his first clash will occur at the second round in Monaco. The Barcelona-based team finished at the foot of the points table last year, but by luring the top driver to continuing in the championship they must expect a leap straight to the front of the field.

But the opposition at the front of the field is fierce. DAMS successfully defended their teams’ title last year while Sainz succeeded their former driver Magnussen as champion. It’s no surprise this team has been entrusted with two of the F1-backed drivers in the series.

McLaren junior driver Nyck de Vries concluded his third season in Formula Renault 2.0 last year by taking the Eurocup and ALPS titles. Nonetheless as he steps up to the bigger he must be aghast at the swiftness with which his younger compatriot Max Verstappen has made it into F1 courtesy of Red Bull.

De Vries shares the DAMS team with the newest addition to Red Bull’s junior team. At 24, Dean Stoneman is noticeably older than a typical Red Bull hiring, but his burgeoning career was dealt a blow in 2010 by a near-fatal brush with cancer. Now back in single seaters, he demonstrated what he’s capable of in a competitive car by taking two wins and a second in his first three drives for Koiranen’s GP3 squad at the end of last year.

While the DAMS duo are new to this category Fortec has opted for experience. Oliver Rowland was fourth in last year’s championship after two wins and a few unfortunate near-misses. Jazeman Jaafar toiled away in the sole ISR entry last year, and as he begins his third year at this level it’s high time he started producing the kind of results F1 fans have come to associate with his car’s silver and Petronas-turquoise livery.

Carlin makes a welcome return to the championship with a pair of cars whose yellow and red colour scheme will be instantly recognisable to European F3 fans. Indonesian tycoon Ricardo Geleal’s fried chicken franchise Jagonya Ayam continues to back the team whose roster includes his 18-year-old son Sean. While it’s a shame Geleal’s F3 team mate (and series runner-up) Tom Blomqvist hasn’t accompanied him on this step, the team has located another highly-rated Tom – Dillmann – and the GP2 race-winner can be expected to lead their charge.

Among those returning for another year with the same team are Mathieu Vaxiviere, who showed well in testing for Lotus, AVF’s Beitske Visser, who ended her first year in the championship with a strong fifth at Jerez, and Pietro Fantin, who had a single podium for Draco in 2014.

Accompanying De Vries in the move up from the 2.0 litre class are Bruno Bonifacio, Gustav Mallya and Aurelian Panis, son of 1996 Monaco Grand Prix winner Olivier. Spotters of ex-F1 talent’s offspring can also keep an eye out for Roy Nissany, although we’re stretching the definition of ‘talent’ here as his father is Chanoch Nissany, who was in the region of seven seconds off the pace in his sole appearance as a practice driver for Minardi in 2005. This is the fourth season for the current iteration of the Formula Renault 3.5 Dallara chassis and its 530bhp engine which produces near-GP2 levels of performance. It’s hard not to recognise a certain amount of jealousy on the part of the FIA in the decision to award far fewer F1 superlicence points to competitors in this championship compared to GP2. There are 173 points available in the F1-supporting championship, while this series awards just 93, which is far too wide a gap given the comparable levels of performance.

Though the cars remain the same, the calendar has had a significant shake-up for the year ahead. While no one will lament skipping the expensive trip to Moscow for what was invariably two processional races, the loss of Monza is a double disappointment for as well as being an ‘old school’ track it also brought the cachet of being part of the grand prix calendar.

However two other F1 tracks make their return as the series will visit the Red Bull Ring and Silverstone. Meanwhile France’s round has moved from the rapid Paul Ricard layout to the more point-and-squirt Le Mans Bugatti track. For the second year in a row, F1 test venue Jerez will host the decisive final double-header.

I will be commentating on the Formula Renault 3.5 championship for BT Sport again this year. Both of this weekend’s races will be shown live. See the BT Sport television guide and BT Sport Extra schedule for more details.