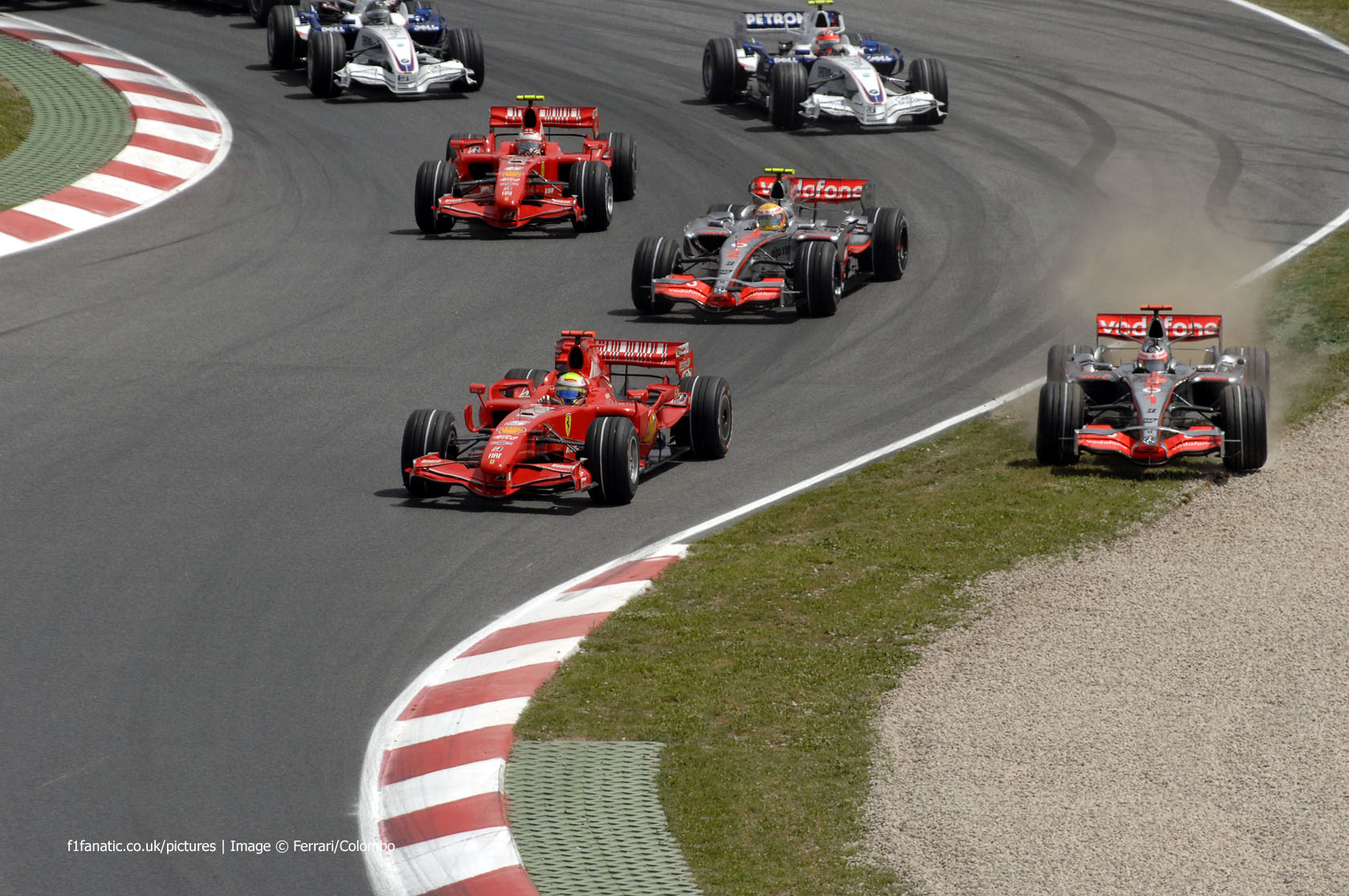 The Circuit de Catalunya has one of the longest straight runs to turn one of any track on the calendar. It rewards good starts and powerful engines.

But one driver in particular seems to have mastered how to make up places on lap one here – local hero Fernando Alonso – although it hasn’t always gone according to plan for him. Williams locked out the front row in 1997 but from third on the grid David Coulthard McLaren was already ahead of the pair of them as they passed the pit lane exit. He and Jacques Villeneuve went through the opening corners side by side but it was the Williams driver who came out ahead. Heinz-Harald Frentzen, who had started second, fell to sixth. Pole sitter Michael Schumacher kept Mika Hakkinen at bay as the cars sprinted towards turn one in 2000. However their team mates were passed by Ralf Schumacher, the Williams driver giving a compelling demonstration of the grunt of BMW’s new V10 engine by jumping from fifth to third in one go. David Coulthard qualified third but failed to get away on the formation lap, leaving a gap on the second row. In a repeat of the previous year Michael Schumacher’s Ferrari held the lead while Ralf Schumacher’s Williams moved up to third.

Heinz-Harald Frentzen’s Jordan also failed to move when the lights went out. As with Coulthard, his problems were a consequence of the FIA’s decision to legalise the previously banned traction control systems. Michael Schumacher took his fourth consecutive pole position at the Spanish track but Ferrari were alert to the threat from the fast-starting Renaults on the second row. Sure enough, Alonso instantly passed Rubens Barrichello for second and was bearing down on the other Ferrari as they reached turn one. Aided by the slipstream and Ferrari power, Barrichello then rocketed back in the hunt for the lead – he drew alongside Schumacher on the outside, was edged wide by his team mate, but managed to rejoin with Alonso’s Renault still behind him.

It was a hellish start for McLaren. Coulthard was taken out by Jarno Trulli at turn two, and Kimi Raikkonen hadn’t even got that far. Having started last after an error in qualifying, Raikkonen smashed into Antonio Pizzonia’s slow-starting Jaguar a few meters after he’d let the clutch out. Not one of Alonso’s better efforts. In his troubled first season with McLaren he arrived at his home event tied for the lead of the championship with rookie team mate Lewis Hamilton and Raikkonen.

But his efforts to to wrest the lead from pole sitter Felipe Massa, who defended his position in uncompromising fashion, caused Alonso to drop behind Hamilton and Raikkonen. Jenson Button started from pole position followed by Sebastian Vettel and Barrichello, and the fourth-placed Ferrari of Massa threatened to get in among them, being the highest-placed car with the benefit of the new KERS hybrid boost.

But while Massa out-dragged Vettel for second it was Barrichello who pulled off the real surprise, driving around the outside of Button to take the lead. Barrichello was far from impressed when he crossed the finishing line in second place, blaming the team for deploying a three-stop strategy which cost him the victory to Button.

There wasn’t enough room for Trulli’s Toyota at the exit of turn two, and after losing control on the gravel he skidded back into the back, colliding with Adrian Sutil’s Force India and forcing both Toro Rossos out as well.

With Red Bull enjoying a near-monopoly on success at the start of 2011, Alonso’s fans came to the Circuit de Catalunya hoping he would do something special. And he did: from fourth on the grid he somehow found a gap on the inside of Mark Webber’s Red Bull which was a few millimetres wider than his Ferrari and snatched the lead.

It couldn’t last – he slipped to fifth at the flag behind the faster Red Bull and McLaren cars. Having taken the lead from fourth the previous year there was little surprise Alonso was able to do the same from second in 2012. But the identity of the pole sitter and eventual race-winner was a real shock – Pastor Maldonado inherited first on the grid when Hamilton was thrown out of qualifying due to a technical infringement, and his subsequent defeat of Alonso remains one of the most astonishing and unlikely results of recent seasons. Mercedes locking out the front row of the grid is standard form these days, but two years ago it was remarkable. Nico Rosberg held his advantage from pole position but Hamilton was passed first by Vettel and then – brilliantly – by Alonso on the outside of turn three. The Ferrari driver went onto win while tyre trouble confined the Mercedes duo to sixth (Rosberg) and twelfth (Hamilton). Twelve months later the front row was similar – albeit with the order reversed – and the outcome utterly different. Hamilton led Rosberg home in a one-two. Meanwhile Romain Grosjean, despite locking up heavily at the first corner, gave the wretched Lotus E22 its best result – qualifying fifth and finishing eighth.