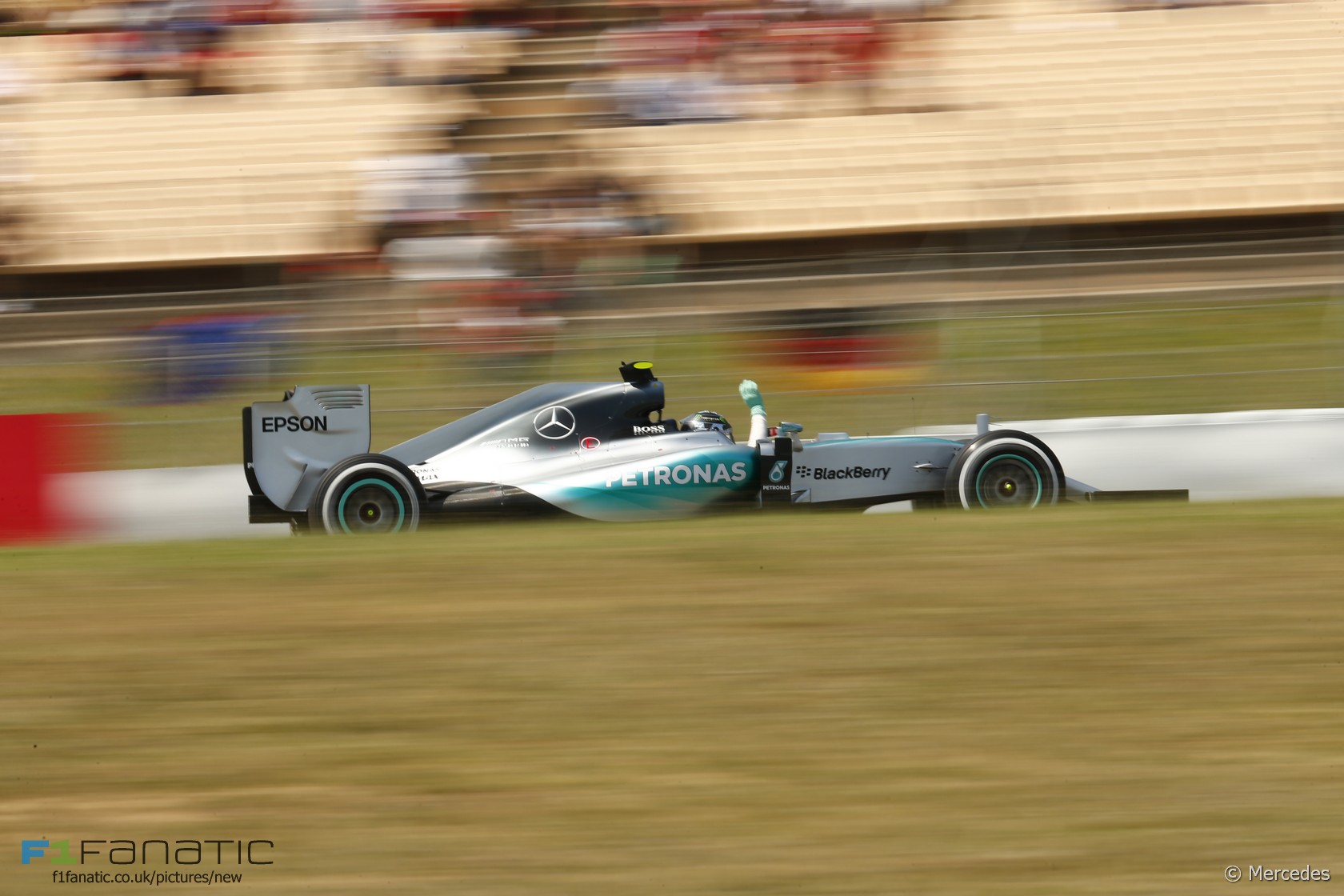 Nine different drivers have won the last nine Spanish Grands Prix – with Nico Rosberg the most recent to add his name to the winner’s trophy.

This unusual streak began with Felipe Massa in 2007. All bar one of the different winners are still racing in F1 today (see table).

The only missing winner is Mark Webber. Coincidentally, Rosberg’s ninth career victory in yesterday’s race means he has now won as many F1 races as Webber.

It also means Rosberg has finished all five races this year in the position he started. But winning from pole position is far from unusual at the Circuit de Catalunya – 13 out of the last 15 pole sitters went on to win the race.

Rosberg’s pole position was the 16th of his career, putting him level with two other drivers currently racing in F1 – Kimi Raikkonen and Felipe Massa – as well as Stirling Moss. It was Mercedes’ 40th pole position too.

However Lewis Hamilton kept Rosberg from taking a hat-trick by setting the race’s fastest lap. That was the 23rd of his career, giving him as many as Juan Manuel Fangio and Neslon Piquet.

Hamilton also extended his streak of consecutive podium finishes to 12. This is the third-best in F1 history: Michael Schumacher holds the record with 19 (from the 2001 United States to 2002 Japanese Grands Prix) and Fernando Alonso managed 15 (2005 Turkish to 2006 Canadian Grands Prix). This was Hamilton’s 75th career podium. Hamilton’s run of leading the last 14 races in a row is also the third-best ever seen in F1. The record for this is 45 years old: Jackie Stewart led 17 consecutive races from 1968 to 1970. Hamilton needs one more to equal Schumacher’s best of 15. However next on the calendar is Monaco, where Hamilton hasn’t led a lap since his sole F1 win there in 2008.

Only the Mercedes and Ferrari drivers have led races so far this year. That same quartet have also accounted for all bar five of the laps drivers have spent in second place this year. Surprisingly, the only other driver to have run in second this year is Force India’s Nico Hulkenberg, during the Malaysian Grand Prix.

Mercedes drivers have now spent more than 2,000 laps in the lead of F1 races. But they’ve a long way to go to reach record-holders Ferrari on 13,726.

Carlos Sainz Jnr scored the best qualifying result of his career with fifth. With team mate Max Verstappen sixth – matching his best from Malaysia – Toro Rosso had their best starting positions since Sebastian Vettel and Sebastien Bourdais lined up first and fourth for the 2008 Italian Grand Prix (though the luckless Bourdais was unable to start from that position in the race due to a problem with his car).

Jenson Button made his 100th start for McLaren, which should have occurred at the last race which he failed to start due to a problem with his car’s electrics.